That had everything, great pitching, terrible pitching, great defense. terrible defense, homers, more homers, clutch hits, big time unclutch outs and enough stupid manager tricks to make everyone happy.  And, of course, a Jay's win. Wow....if you didn't sweat that out, you shouldn't watch baseball. Let's start with the fangraph: 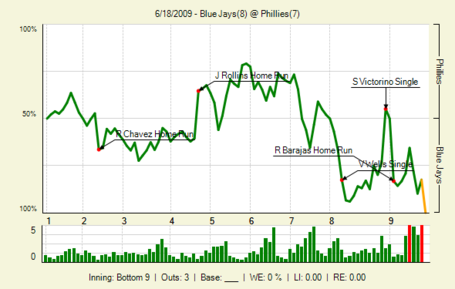 As you can see the game went back and forth a lot.

Shall we start with a Cito rant? Bottom of the 8th we is up by 2 and Cito tries to stretch out Brandon League for another inning. Really not a bad idea, he didn't want to have to use Accardo or Ryan and League pitched a great 7th. League got an out, then gave up a homer to make it a one run game, then a ground out, then a double. Cito brought Jason Frasor in and we all thought he'd do a double switch so Frasor could pitch the ninth and get a 4 out save. Raul Chavez made the last out of the top of the 8th and the obvious move was to put him in Chavez' spot and put Rod Barajas in the 9th spot to lead off the bottom of the 9th. But, he didn't. Frasor came in and was put in the 9th spot so he would have to lead off the 9th or be pinch hit for. I really couldn't believe it. It was the obvious move. So Frasor gives up a single to tie the game and then gets out of the inning on Chavez throwing out a runner stealing second. Would Rod have made that throw? We don't know.

Top of the 9th, Rod Barajas pinch hits for Frasor, leaving us with B.J. Ryan and Jeremy Accardo to pitch the rest of the game. And, you know, I've been saying all season that in game moves really likely don't win or lose that many games for you. Barajas hits a home run. Now had they done double switch, Rod would have still come up to bat, but, of course, we can't know if he would have hit a homer after playing the bottom of the 8th. A really bad manager move worked out. It is hard to understand, Cito did the wrong things, and it worked out for him.

Of course, without Frasor in the game, Ryan and Accardo had to save the game. BJ came in to face the lefties Chase Utley who singled and Ryan Howard who struck out. In comes Accardo for his first major league action of the season. First batter, Jason Werth who has been amazing against the Jays this series, flies to shallow center, a sure hit, except Vernon Wells makes an incredible sliding catch. I mean, I don't like Vernon's defense, but he read the ball right off the bat and made a catch that I couldn't believe. Accardo gets John Mayberry, Jr. to pop out to end the game. His first save since last spring and he shouldn't have been in the game except for Cito's dumb move. And it works. Baseball is a strange game.

Other than that, Brad Mills didn't impress and left after 3.2 innings, 6 hits, 4 walks and 4 earned. I really hope the Jays call up someone else before he comes around in the rotation again. Camp got us a needed out but left after that for a pinch hitter. Hayhurst gave up his first run of the season on a homer, in his 1 inning of work but came out for a pinch hitter as well. Jesse Carlson pitched a perfect inning, striking out all three he faced. Then League came in...and we've been thru all of that.

Offensively, everyone had hero and goat moments. We had 16 hits. Chavez, Adam Lind and Barajas homered. Vernon Wells had 3 hits, a big double that scored a run in the second, and a bigger flare single scoring a run in the 8th. He also had a bad pop up with the bases loaded in the 5th and was throw out at the plate in the 8th, he could have made a better slide, but then I didn't see anyone help him on where to slide and it was an amazing throw by Mayberry that got him. And he made that catch.

Lind also had 3 hits and the homer. Marco Scutaro had 2 hits and 3 walks, Rolin had 2 hits, including a double that he really turned on the jets to get, and Chavez had 2 with a homer. Barajas had the big big pinch homer, Overbay had a single and 2 walks. Inglett had a pinch hit. The only 0 for was Hill who had a really rough game, leaving 7 runners on base and striking out 3 times.

The game was great fun, the game thread was also great fun. And we start 3 games in Washington tomorrow. So life is good.