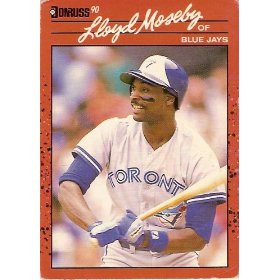 We were a pretty lousy team back then and Moseby was rushed thru the minors in two years though he did hit .300 and slugged .500 in his couple of seasons in the minors. He was called up to the Jays in late May of 1980. He was just 20 and over-matched in the majors. But like I said we weren't a very good team back then and we kept him in center field. We weren't exactly crawling with great prospects so we could afford to keep him on the roster. For his first 3 season he didn't hit better than .236.

Lloyd's 4th season with the Jays, he finally learned to hit, having a terrific .315/.376/.499 line. He scored 104 runs (becoming the first jay to score 100 in a season), hit 18 homers and stole 27 bases. He won the Silver Slugger award and he received some MVP votes. He was 5th in runs scored and 6th in batting average and had a then team record 21 game hit streak.

He had another good season in 1984, hitting .280/.368/.470. He led the league in triples with 15 and stole 39 bases. Scored 97 runs and drove in 92. He got some MVP votes again. As Bill James said at the time, his strengths were "hitting for power, hitting for average, range, throwing, base running, patience as a hitter. Weaknesses none." Course he also thought that he would win a MVP award and that part didn't happen.

His last couple of seasons with the Jays were slowed some by injuries to back and legs (the hard playing surface in Toronto didn't do him any good, he likely would have had a longer career if he played on grass) and he was being pushed out of center field by prospect Junior Felix. His last season with the Jays was 1989 and we made the playoffs again that year. Lloyd did well in our 5 game loss to the A's, hitting .313/.476/.500 with a homer.

After the season he signed with the Detroit Tigers as a free agent. He had two not very good seasons with the Tigers and then went to Japan to play for the Yomiuri Giants for two years to finish off his career. He coached first base for the Jays in 1998 and 1999.

Moseby was part of the Jays outfield that was thought to be the best outfield of the 80's with George Bell and Jesse Barfield. He had terrific range, he had to with George Bell playing beside him and a decent arm. He never won a Gold Glove but likely should have had at least a couple of them. He had the longest career, with the Jays, of any of the three of them.

He was one of those players who did everything well but nothing so great that he got the attention his outfield teammates got. Unfortunately for him most fans at the time only focused on batting average. He had good power, he hit for a decent average, took a lot of walks, had good speed, your basic 5 tool player. When he left the Jays he was the team career leader in games played, runs, hits, doubles, total bases, stolen bases and sac flies. On a team that platooned a lot he played against both lefties and righties and didn't have huge splits.

Rob Neyer in the ‘Big Book of Baseball Lineups' had Lloyd as our best CFer in team history and Bill James had him as the 71st best center fielder in baseball history in his ‘New Historical Abstract'. Moseby got the nickname Shaker for his ability on the basketball court. At 6'3" and 200 pounds he was a terrific athlete. And he was also the subject of a rap song, Shaker's Rap, which you can find on the internet if you really want.

Once, in a game against the White Sox, he successully stole second base, and the throw from the catcher went into centerfield. However, shortstop Ozzie Guilen faked him out by acting as if the ball had been popped up. Thinking that he was about to be doubled off of first, he ran back there instead of taking the extra base. The centerfielder threw in to first - and the ball went into the dugout. Moseby made it back safely to second, having run 270 feet to go 90 feet.

He was a fun player to watch, happy guy.