Once Again, Can We Petition Bud Selig to Shorten Games to Eight Innings?

Share All sharing options for: Once Again, Can We Petition Bud Selig to Shorten Games to Eight Innings?

Jays lose another one-run game, this time in extra innings.  Apparently, an 8-0 lead after five innings and a 9-0 lead after six is not enough.  The Rays chipped away in the seventh with four runs, the eighth with two and eventually managed to tie up the game in the ninth with homeruns by Carlos Pena and Willy Aybar off Scott Downs.

The Rays plated the winning run in the top of the 12th against Shawn Camp (who was pitching his second inning) off a Jason Bartlett double.  The Jays loaded the bases with one out for Aaron Hill in the bottom of the 12th, but he struck out.  Adam Lind rolled over to end the game.

On the bright side, this does mean that the Jays did manage to plate nine runs in the first six innings, aided by four homers (two by Hill and one each from Rios and Bautista).  Millar and Overbay combined for an 0-6, though Millar did pick up an RBI.

It's kind of hard to write about this one, I am still sort of reeling from this loss, so I'll cop out and just add the win-probability graph: 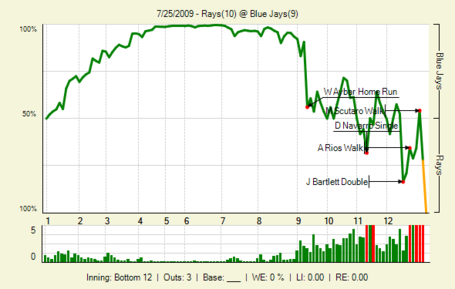 Jays of the Day: Scutaro (.155), Rios (.130), Frasor (.143) and Tallet (.104 even though he yielded five runs over six innings because the Jays had already scored nine runs).  Honorable mentiont to Bautista and League.

By the way, guys, this isn't the best way to convince Doc that he should stay.  Maybe we can pick up a win and avoid the sweep tomorrow when Brett Cecil takes the mound against Jeff Niemann.