Walk Off Wins Are Fun. Aaron Hill Comes Up Big in Extras

Share All sharing options for: Walk Off Wins Are Fun. Aaron Hill Comes Up Big in Extras

Winning is nice, come back wins are even better. The fangraph is cool so let's put it up. 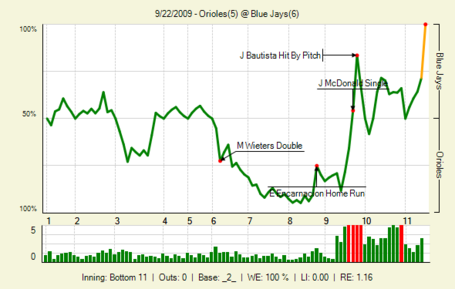 Brian Tallet, I thought, didn't pitch as bad as his line reads. 6.1 inning, 11 hits, no walks, 3 strikeouts. Not many of the hits were hit all that hard, but he was helped out by some good defense. Carlson, League, Accardo and Camp pitched us 4.2 innings of shutout ball.

Offensively, we got back to back homers in the 3rd from Aaron Hill and Edwin Encarnacion. Encarnacion hit another homer, a two run shot in the 8th. In the 9th we loaded the bases and Jose Bautista took one for the team to bring in the tying run. But Hill and Encarnacion struck out to end the inning. We had a good chance to win the the 10th, loading the bases again but since we don't have a backup shortstop, we can't pinch hit for John McDonald. In the 11th Bautista walked and Hill doubled him home for the win and his 100th RBI. .

We had 11 hits on the day, everyone in the starting lineup had at least one hit but everyone's hero Kevin Millar and Rod Barajas. Rod is back into a slump, 0 for his last 17. It is pretty bad when those two are our 5 and 6 hitters, batting .232 (Rod) and .209 (Kevin). Millar did take a walk but was thrown out at the plate trying to score from first on a double. Man is he slow.

One thing I really don't understand, in September with expanded rosters, why can't we bring in another guy that can play SS so we could maybe pinch hit for John McDonald? I know it might cost the team a buck fifty, but wouldn't it be worth it?

It is very nice to see Encarnacion show off some power. He has 5 homer in the last two weeks. And his defense looks better, to me, than advertised.