Yesterday, after hearing the stunning news of Cliff Lee signing with the Phillies, I got thinking about how many teams he's played for since the start of the 2009 season.  Four teams in 2 seasons, and soon to be a fifth, seems to be a lot for a player of his calibre. (Note, I'm counting the Phillies twice since they're two distinct time frames)


Over the last 6 years, Lee has accumulated 27.5 fWAR and has been steadily good other than his injury shortened 2007.  Using fangraphs WAR data from 1980 onward, I grouped together every pitcher that has pitched 6 years at 27.5 WAR or greater over that timeframe.  Obviously many players are on this list multiple times, so I counted them multiple times.  Then I figured out how many teams those players played for over that time span.

Some fun graphs (okay, so my graphing skills are limited) and lots of links after the jump. 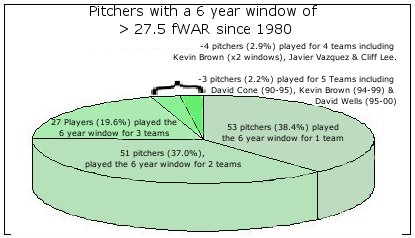 The problem with the 6 year, >27.5 fWAR graph, is that it includes a lot of good, but not great pitchers.  Guys like Javier Vazquez get included because of their consistent play and I wanted to look at more elite type pitchers.  Over the last 3 years, Lee has accumulated 20.9 fWAR, so the graph below shows all pitchers that have accumulated >20 fWAR over a 3 year window. 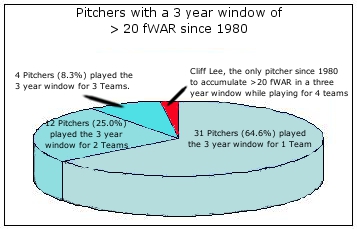 In conclusion, pitchers of Lee's caliber just don't change teams as much as he has.  30 years of data, and he's the only pitcher fitting the above criteria has played for 4 teams in a 3 year span.

The Southpaw: My New Obsession
The Southpaw is liking Baltimore Oriole's reliever, Mike Gonzalez. Think he could be had for cheap?

Top 50 Blue Jays Prospects, Jays Journal Edition: #49 John Tolisano | Jays Journal
Mat Germain and Jared Macdonald are putting together a Top 50 prospect list that is jam packed with information. Everything you ever wanted to know about each prospect, and probably a whole lot more. Number 50 is here.

National Post | Votto a Standout in a Year Full of Them
Canadian content. Votto wins the Lou Marsh award (Best Canadian athlete). A breakdown of his season and a quick look at the other candidates. I think I would have given the award to Jonathon Toews (who won the best forward award for the olympic gold, and the Conn Smythe trophy for Stanley Cup MVP). Votto is certainly deserving though.

Gallery | Photos | Multimedia | National Post
For something a little different, the National Post has 40 fantastic photos from the world of sports this year. Good stuff.

Marcum slots into middle of Brewers rotation
Some Marcum talk from the Brewers side of things.

Ghostrunner on First: Contrast & Compare
Breaks down the difference between FanGraphs WAR and BaseballReference WAR for pitchers.  A look at hitters here.

The 5th starter: A Toronto Blue Jays Blog: The (Brief) HIstory of $100 Million Contracts
A good breakdown by The 5th Starter.

Joe Posnanski " Posts Great Four-Man Rotations (w/Bill James) "
Joe Posnanski takes a look at the best pitching rotations with the help of Bill James. Long winded but worth a read.

Reds, Bruce agree on $51M extension
The Reds keep give out more money.

Starting Pitcher DL Projections (Part 2 of 2) | FanGraphs Baseball
Jeff Zimmermanattempts to project which starting pitchers will end up on the DL next year.  Part I Here.