Marcum wasn't as good as he was opening day, but he battled through 6 innings, gave up 8 hits, 1 walk and 5 strikeouts. All those hits only added up to 2 runs against. He only had 1 three up, three down inning, but he kept the game close. Then the league leader in wins comes in, pitches his inning and we score 3 for him. Scott Downs and Kevin Gregg pitched a scoreless inning each for a hold and a save.

Offensively we did nothing for the first 7 innings, save a solo homer by Alex Gonzalez. We finally got to Kevin Millwood with two outs in the 8th: John McDonald gets on on an error and Jose Bautista hits a homer, then Gonzalez hits his second home run of the day and we are up by 2. Edwin Encarnacion added a crushed solo shot in the 9th to give us a three run lead.

Jose Bautista came within a few feet of hitting a lead off homer on the first pitch of the game, just pulling it foul. After that he looked bad at the plate until the homer. He, Gonzalez and Encarnacion each have this all or nothing swing, but they got it all four times and that makes up for the nothings. Johnny Mac got on 4 times today, 2 singles, a double and an error.

The bad? We got 0 fors from Lind, Wells, Overbay, Buck and Snider. Wells and Lind each took a walk at least. And Alex Gonzalez made an error on a throw he shouldn't have tried. But since he hit two home runs we'll forgive.

I'm going to put in the fangraph, since it is a thing of beauty today: 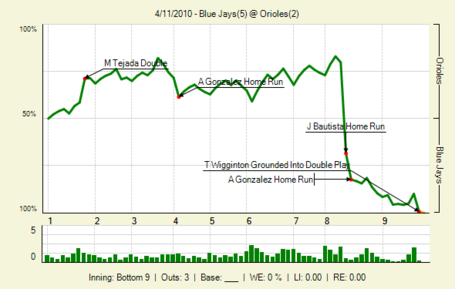 That makes us 5-1! 5 straight wins. Including 3 of the late inning comeback type wins. And we are in first place. Life is good, enjoy it.