This team is just so much fun to watch.

Come back wins are getting old hat around here. This time, down by 2 going in the 9th, against White Sox closer Bobby Jenks (who is challenging Mitch Williams for my favorite non-Jay closer) is when we decide this game is ours. Travis Snider started us off with ground rule double to left center. John Buck fought off a pitch and blooped it into right field for a single. Then Fred Lewis. Fred Lewis, the guy that wasn't good enough to get a job in the Giants outfield, hits a three run homer to give us the lead. I'm starting to think that Alex Anthopoulos should buy lottery tickets. It seems like every move he makes works out.

We had 11 hits on the day. Three for Vernon Wells, who had his 9th homer, a two run shot and a double. Aaron Hill was 2 for 4 with a walk, nice to see him hit the ball hard. Adam Lind had a hit and a walk. Lewis only had the one hit but it was enough. Only ones not to hit were Randy Ruiz (0 for 4 with 2 K) who looked just terrible at the plate and Jose Molina, but he walked and was hit by pitch.

Our pitching wasn't good today, until Kevin Gregg came in for the save. Ricky Romero battled through 5.1 innings, giving up 8 hits, 5 walks, 4 earned runs with 7 strikeouts. He wasn't good, but he did limit the damage enough to have a shot at a win. Shawn Camp gave that away by serving up a home run to Alex Rios. Rios is killing us, 4 for 4 with a homer, a double and a walk. Camp left the game with runners on first and second. Scott Downs came in, walked one and 'hit' Juan Pierre with a pitch to bring home a run. Or at least the umpire thought Pierre was hit. The ball might have brushed his uniform. The second time we've been ripped off on 'hit batters' against the White Sox  Jason Frasor gave up a run in the 8th to make our comeback a little more dramatic.

Let's put in the Fangraph: 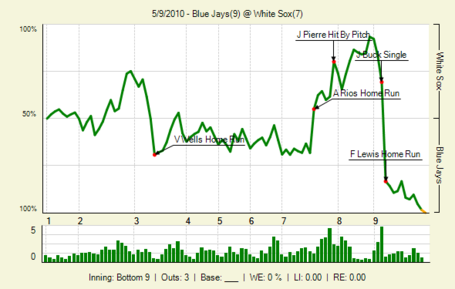 Randy Ruiz made a nice play on defense but he's not hitting at all. I'm starting to think that it is time to pull the plug on the 32 year old rookie. He hasn't had much playing time but he hasn't earned any either.  Also, talking about older players. Jose Molina can't seem to block any pitches. There were two 'wild pitches' today and a passed ball. A catcher with his defensive reputation should be doing better.

Anyway, we win another series. Off to Boston.

In other news Dallas Braden just threw a perfect game against the Tampa Bay Rays. Amazing to get the perfect game against a very good Rays lineup. He had a hug from his mom  grandmother right after. His mother died when he was in high school. That's what I get for watching without the sound on. 19th perfect game in Major League history.