The Jays made a great comeback. When you are down 7 to 1 after 2 innings and 8-1 after 3 and a half, you don't expect to tie the game. We could have used one more run.

Brett Cecil had a terrible night. He gave up 6 runs in the first and another in the 2nd. When he started the 3rd with a walk Cito took him out of the game. In his 2+ innings he gave up 8 hits and 7 earned. The Rays hit for the cycle in the first inning.

Our bullpen did a great job. 7 innings with just 1 hit. Josh Roenicke threw 3 innings and gave up the hit, a B.J. Upton home run. Other than that he was perfect. Casey Janssen got 2 outs but walked 2. Jesse Carlson got the last out of that inning. Jason Frasor had a perfect inning. Shawn Camp threw a scoreless inning, pitching around a pair of walks.

Then Kevin Gregg came in for the 9th. He got a fly out then walked the next two batters. If you look at Game Day, you'll see he wasn't getting the edges of the strike zone. He got Sean Rodriguez to hit into want could have been a 3-6-1 double play. Just like a couple of days ago, Yunel Escobar took the throw from the first baseman and then threw it well wide of the pitcher at first. The winning run scored on the throw.

We got 5 home runs. Jose Bautista got his 45th and 46th. The second one came after Jose had tried to call time, on the first pitch of the at bat, and stepped out of the batters box, but the umpire didn't give him time and the pitch was a strike. I think he was a little upset. The next pitch went a long way in a hurry. Adam Lind hit his 21st and John Buck his 18th.

The dumb move of the game came in the 3rd inning. Yunel was on 1st and Snider was on 3rd, one out. Bautista hita shallow pop fly and, for some unknown reason, Snider tried to score. I'm not sure if Brian Butterfield told him to go or not, but watching them talk in the dugout after the inning, it looked like Butterfield telling Travis what he wanted. Snider should have faked running home to draw the throw but no way should he have gone.

Tomorrow afternoon Ricky Romero takes on the Rays and Wade Davis. The game is on the normal Sportsnet channels.

It was a pretty cool Fangraph today: 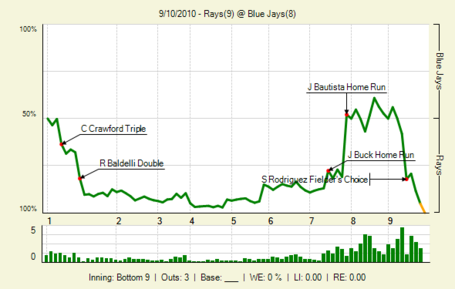