Share All sharing options for: Blue Jays in Calgary

The Blue Jays Winter Tour has come and gone from Calgary. They are in Vancouver now.

Their activities in Calgary started with a visit to the Downtown YMCA. It started with a bit of media time. I was able to talk to John Farrell for a few moments and Ricky Romero. Farrell seemed very thoughtful, quite serious. Romero was thoughtful too.Hopefully I'll transcribe it over the weekend. I talked to Bruce Walton long enough to ask if I could have a longer interview in the future, since he lives in Calgary. I also talked to Jamie Campbell for a bit, a nicer person you could never meet.

After that they were introduced to a group of children and took some questions from the kids. Some where funny. Asked how many home runs they had hit, Jesse Litsch said 'I haven't hit any home runs but I've given up a few'. Jp said he has hit 2 in the majors, but they were both in the same game. With his teammates teasing him he added that all together he hit 34 last season. Asked what sport they'd like to play if there weren't baseball players. Litsch said basketball. Romero and J.P. Arencibia each said football and quarterback. John Farrell said golf and Bruce Walton said 'fishing, if that's a sport'.

After a bit the kids broke into groups and the Jays helped them throw, catch and hit a ball. Litsch, in particular, was great fun with the kids, having them throw at his face and making them laugh. Arencibia was getting kids to hit a ball off a tee. He was quieter but seemed to have fun with the kids too. I got to talk to Litsch for moment at the end of it but he was swarmed by kids for autographs, I think they saw him as a big kid.

I brought a camera along but didn't notice that the battery was dead in it until I got there. I took a couple of photos before it died but I don't have a good eye for pictures. Fortunately I do have a friend that takes good pictures, so I got her to come out to a couple of the Jay's appearances the next day. I'll post a couple of her pictures after the jump and more of them later today.

They went from the Y to the Flames game and were treated to a terrible effort by the Flames, a 6-0 loss to Nashville, one of several teams they would have to pass to get to the playoffs. It isn't happening. The next morning they were on 'Breakfast Television'. John Farrell and Bruce Walton were on the FAN 960 morning show.

They went to two schools in the morning. I went over to Langevin Science School so my friend could take some pictures. The kids asked Jesse Litsch and Bruce Walton some great questions. I learned that Jesse eats a microwaved chicken and cheese sandwich, before every game he pitches. Jesse claimed he wasn't the most superstitious on the staff. One kid asked how hard Jesse could throw and was told 92 MPH by Bruce Walton, which was quickly converted to 142 kilometers per hour by one of the teachers. Walton said that it wasn't just how hard he threw that made him a good pitcher but his control. We also found out Jesse likes the Orlando Magic and was a Cincinnati Reds fan as a kid. 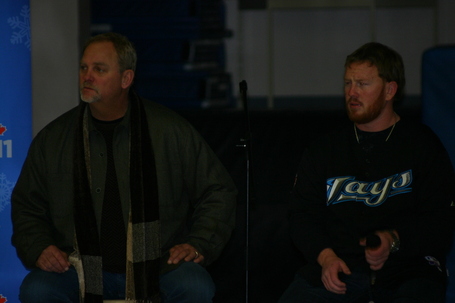 Bruce Walton and Jesse Litsch listening to a question.

They also gave the school a jersey signed by the players and coaches that were in Calgary: 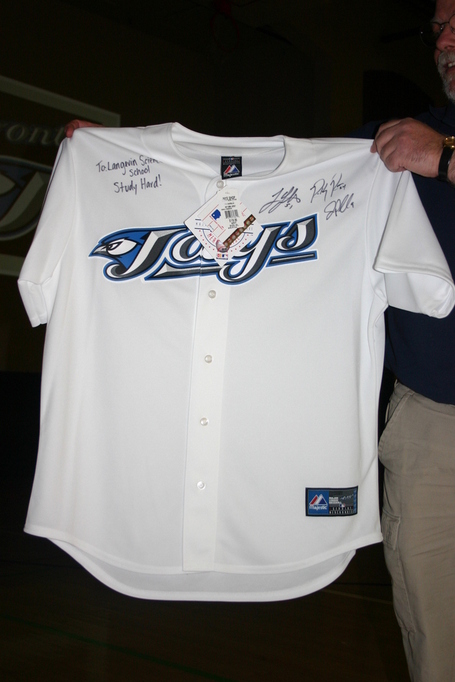 After that the Jays went to the Cross Iron Mills mall and signed autographs for an hour. The line for autographs was huge, I expected 40 people maybe but they signed for an hour and didn't make it through everyone that was in line. I chatted with the Jays PR people, Jamie Campbell and Bruce Walton while Belinda took a bunch of photos of the signing. I'll post more of the pictures this afternoon. 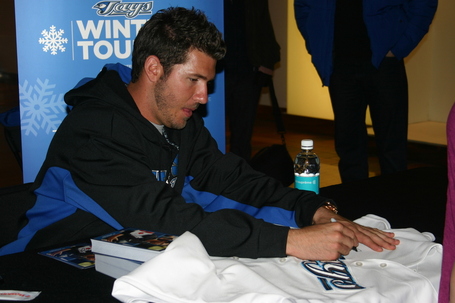