Share All sharing options for: Let's Map these Pitches: Ricky's Changeup is Nuts!

The idea behind these maps is to make it easier for people to understand the different kinds of fastball (and other pitches') movement and to create some reference points for talking about these pitches. "Man, Alvarez' sinker sure sinks a lot. Okay, it doesn't sink or run as much as Lowe's sinker, but it's not too far off, and the pitch has more velocity." I think you get the idea. Without reference points, looking at PitchF/x graphs wouldn't tell us much. I should note that just because a pitch has a lot movement does not mean it's necessarily a good pitch. Some pitches move a lot but are hard to control, a lot of changeups don't rely on movement but on deception, and most breaking balls are harder to hit when they're thrown harder. So these maps are in no way a means to deduce who's got the best pitches, but rather to show the difference in pitchers' arsenals.

Let's see what kind of pitches are thrown by right-handed pitchers: 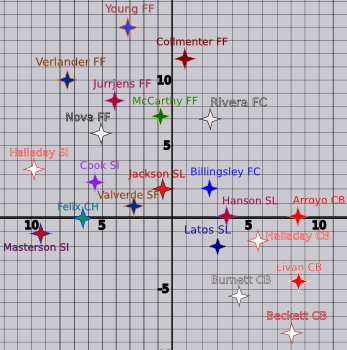 And the winner of the "Most Sinking Sinker Quiz" is....nobody. The only two guesses were Jake Westbrook and Chien-Ming Wang, but the correct answer is Justin Masterson. Get this: Masterson's sinker has more downward movement than Bronson Arroyo's curveball. I don't know, though, if that is more amazing than Felix Hernandez's changeup, which averages over 89 miles per hour, yet has the same downward movement as Arroyo's curve. The most diving splitter I could find was Jose Valverde's, but as far as starters go Hiroki Kuroda's split is pretty similar in movement. Aaron Cook throws his sinker a whole lot (79.9% over his career), even though it doesn't have downward movement comparable to Masterson's sinker. It does distinguish itself, however, in being the sinker with the least running action I could find. As far as four-seamers go, Ivan Nova seems to have the "least rising" or "most sinking" one, depending on what you want to call his pitch, which is in between a regular four-seamer and a two-seamer.

(more after the jump)

You are all familiar with Rivera's cutter of course, and among righties it is unrivalled in terms of cut and "rise". Since it's also thrown pretty hard, it's not difficult to see why it's such a good pitch. Chad Billingley's cutter may seem to move a lot like a slider, but it's thrown too hard (compared to his fastball) to be a slider and it seems to be effective against lefties more than against righties, something that certainly isn't often attributed to sliders. Arroyo's curveball, a strange "horizontally-moving-but-not-dropping" curve, is quite the opposite: it works against righties but is very ineffective against lefties. Did you know that Arroyo had a 7.01 FIP versus lefties this season? He gave up more homers (27) than walks (26) versus left-handed batters. Mat Latos seems to be the king of the disappearing slider, while Josh Beckett's curveball is an example of depth (Adam Wainwright's curve, among others, was pretty similar). Livan Hernandez, Roy Halladay and A.J. Burnett also have effective curves, all with their own kind of movement.

Because we were already somewhat familiar with the right-handers, I'd like to quickly move on to the lefties: 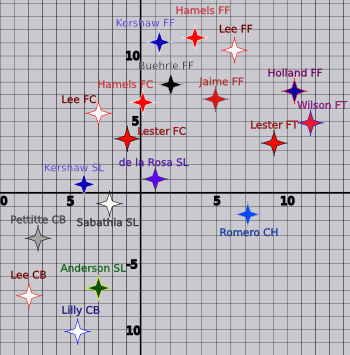 I'm sure you'll notice that lonely, Blue Jays-colored star in the bottom-right quadrant of the grid. That is Romero's changeup and yes, it doesn't just sink, it disappears. It (probably) looks like a fastball, but it drops more than a C.C. Sabathia slider (and that's one heck of a slider). I've found four of these disappearing changes, the others thrown by Max Scherzer, Felix Hernandez and Jorge de la Rosa, but Romero's change drops the most. The reason Romero's changeup looks so lonely is not only a special kind of vertical movement, but also that there seems to be a lack of great sinkers among lefties. This isn't that strange, because sinkers are usually seen as less effective against opposite-handed batters, and left-handed pitches face more righties than right-handed pitchers face lefties. C.J. Wilson's sinker may not sink that much, but it does run away from righties. Derek Holland's four-seamer does the same, as does David Price's, which is not shown here but is very similar to Holland's.

In terms of rising fastballs, I bet you wouldn't have expected Cole Hamels to have the fastball with the most rise. I sure didn't expect that, as Hamels has a groundball rate upwards of 50% this season. Strangely, his fastball (just four-seamers, he doesn't throw a two-seamer) gets upwards of 40% groundballs. This is at least partially explainable by an increase in fastballs located down in the zone, but is that the whole story? Neither Lee (~37%) nor Kershaw (41%) get very low groundball numbers versus righties either, and they get even more groundballs versus lefties. But then Jaime Garcia's fastball gets more than 50% groundballs, so perhaps fastballs by left-handed pitchers are just hit on the ground by right-handed batters more than the fastballs thrown by righties? It's a mystery, but I don't know if I'm going to (try to) solve it.

Cliff Lee has a cutter that seems like the left-handed version of Mariano Rivera's offering, but it's not nearly as effective (and it does have less "rise"). One pitch that is certainly very effective is Brett Anderson's slider (curveball movement, but slider velocity), which unfortunately seems to have somewhat destroyed his elbow. C.C. Sabathia, Clayton Kershaw and Jorge de la Rosa have very different sliders, but they're all effective. To fill the "Beckett position" among lefties there were a lot of options available, notably Gio Gonzalez, Wandy Rodriguez and Barry Zito, but in the end I gave it to Ted Lilly. It is interesting to note that the breaking balls thrown by southpaws seem to move less horizontally than those thrown by righties. I wonder if effectiveness versus opposite-handed batters plays a role there, again. I did note earlier that Arroyo's horizontally moving curveball was very ineffective versus lefties.

Having shown you through the types of pitches that exist, I'd like to start writing some scouting reports on MLB pitchers using the movement they have on their pitches, among other info. The "scouting reports" given by Buck and Pat often frustrate me with their inaccuracy and general lack of relevancy. I'd like to ask you this: are you interested mostly in good pitchers, or would you prefer to see how the Bruce Chens of this world survive? And would you want to see mostly AL pitchers' scouting reports, or do you want to see some NL pitchers' reports as well?