Roy Halladay was drafted out of high school with the 17th overall pick in the first round of the 1995 MLB June Amateur draft, less than a month after he had turned eighteen years old. That same year he would pitch 50 innings for the Blue Jays' Gulf Coast League team, registering a 3.40 ERA and a solid strikeout rate. In 1996 he pitched for Dunedin at the high-A level, skipping a few levels, and while his strikeout rate was no longer solid, his ERA was a very nice 2.73. Baseball America was impressed, ranking him as their 23rd overall prospect. After a disappointing 1997, during which he pitched mostly at Triple-A Syracuse (4.58 ERA over there), he was only ranked as the 38th overall prospect. Still only 21, he repeated Triple-A in 1998 and pitched to a 3.79 ERA, despite uninspiring strikeout and walk ratios. Either that, or his impressive two starts at the big league level that year, convinced Baseball America to rank him as their 12th overall prospect ahead of the 1999 season. In 1999, Halladay made 18 starts and 18 relief appearances for the Blue Jays, pitching to a 3.92 ERA, even though his strikeout and walk ratios were once again disappointing: his FIP was 5.36.

In the year 2000, the world survived the coming of a new millennium, but Halladay didn't: his 10.64 ERA in 13 starts was the wrong kind of impressive, and he ended up demoted back to Triple-A, where he posted a 5.50 ERA with a new low in strikeout%, although he improved his control a bit. The next year proved to be a pivotal one for Halladay: starting the year in High-A, he was helped by the late Mel Queen, who was a former Jays pitching coach, in reinventing his delivery and pitching strategy. Queen's advice worked very well: a lower release point and a pitching style focused more on movement than on velocity helped Halladay climb his way across three minor league levels all the way back to the majors, where he would start 16 games with a 3.16 ERA, almost doubling his strikeout rate and almost halving his walk rate. After a very good 2002, a stellar 2003 campaign, with a lot of his trademark groundballs and very few walks, won him a Cy Young Award. Since his ERA that year, 3.25, was higher than the previous year, he probably impressed the voters most by collecting 22 Wins. Coincidentally, the voters picked a good year to give the award to Roy, as Halladay's xFIP- (xFIP corrected for league and park) that year is still the best of his amazing career. After two injury-shortened seasons in 2004 and 2005, Halladay would make more than 30 starts each year in the period 2006-2009, registering an ERA above 3.20 only once (the 2007 season during which he underwent an appendectomy).

After Halladay was traded, along with $6M, for prospects to the Philadelphia Phillies at the end of 2009, he continued to be amazing. In addition to a fantastic 2.44 ERA, in 2010 Halladay got himself both the 20th perfect game and only the second postseason no-hitter in Major League Baseball history. He was also awarded his second Cy Young Award, though this time it was, of course, the National League one. In 2011 Halladay was every bit as good, if not better, as he improved to a 2.35 ERA and a career high strikeout%. He did not pitch a no-hitter, much less a perfect game, but he could yet get the Cy Young Award if he beats out the likes of Clayton Kershaw and his own teammate Cliff Lee in the voting.

(the most interesting stuff is behind the jump) 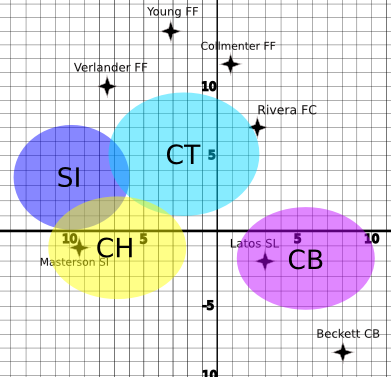 Roy Halladay throws four pitches: a sinker, cutter, a curveball and a splitter/change. His sinker has mostly average a little bit more than 92 mph on the gun over his career, with the cutter coming in a bit more than half a mile per hour slower. His changeup has usually been about eight mph slower, though in 2011 the gap was even larger at almost nine miles per hour. At 77-78 mph, Halladay's curve seems neither slow nor fast.

The movement on Halladay's pitches is quite easily generalised: his pitches move downwards. But that is not quite the full story here. Halladay's sinker has impressive run (movement inside to same-handed batters) but the 'sink' on it is far from special. His cutter moves down a lot compared to a four-seam fastball, but the cut (movement away from same-handed batters) is hardly different from a regular fastball. The effect is probably bigger, though, because of the contrast with the horizontal movement of his sinker. Halladay's curve has a relatively large amount of horizontal movement (away from righties), although the drop is not much more than that of a good slider.

Halladay's changeup deserves some special attention. Before he was traded to the Phillies, Halladay threw a regular changeup which had movement similar to his sinker. With the Phillies he started throwing a splitter, and as you can see it has crazy downward movement, especially for a split/change, while it has less running action than his sinker (and therefore also his previous changeup). While doing research for the pitch maps articles, Halladay's splitter is a pitch I overlooked: it has even more downward movement than Felix Hernandez' changeup.

Since 2004, Roy Halladay has always thrown his sinker/cutter combination more than 70% of the time (that's a lot), with the exception of the 2011 season. His offspeed stuff was mostly limited to the curveball, which he always threw around 22% of the time, with his changeup never an important part of his arsenal at a maximum of 6%, but more often thrown 3-4% of the time. That changed with the adoption of the splitter, which he threw 11.5% of the time in 2010. That year only the curveball suffered a decrease in usage, but in the 2011 season his fast stuff also saw a decline in importance as Roy increased his splitter% to 15.5.

As the first pitch in an at bat, Halladay elected to go offspeed 29% of the time in 2011, with 18% curves and 11% splitters. This is up from 23% in 2010, mainly because he did not seem to trust his splitter to start off at bats with back then. In 0-2 counts, Roy increases his curveball usage to 29-30% of the time, although he does still use it when he is behind in the count. His splitter has also earned Roy's trust enough to be thrown when behind in the count, as it saw usage percentages of 12% and 20% in 1-0 and 2-1 counts, respectively, in 2011. Comparatively, the curveball was called into action 15% of the time in 1-0 counts and 16% in 2-1 counts. After the count had run full, Halladay went with an offspeed offering 31% of the time in 2011, up from just 14% of the time in 2010. The sample or these full counts is probably very small though.

I should note that PitchF/x has some problems separating Halladay's cutter from his sinker, so the contrast between their stats could be somewhat unreliable. Certain is, however, that Halladay throws his cutter for a lot of strikes, about 4.5% more than an average fastball would get (and he got even more strikes with it in 2010), while it is put into play at the same rate as an average fastball. Halladay throws the pitch significantly more often to lefties than to righties, possibly because it gets more groundballs (~49%) versus lefties than versus righties (~37%). If it is actually more effective versus lefties remains to be seen, though, as lefties swing and miss a lot less against the cutter than righties do. The reason might have more to do with a perceived ineffectiveness of his sinker against lefties than any increase of effectiveness of the cutter against lefties.

Though the sample is small, the 2011 data does not show his sinker to be less effective at getting groundballs when used versus lefties. In fact, the 67% versus lefties comfortably beats the 58% groundballs versus righties, although in 2010 he got 65% groundballs versus both lefties and righties. Overall, Halladay threw a large number of strikes with his sinker in 2011, just slightly less than he did with his cutter. The sinker is put into play more, but at the rate it is hammered into the ground, Halladay probably doesn't mind. Even though the groundball rate on his sinker isn't special compared to other sinkers, the way Halladay can throw it for strikes most definitely is.

Roy Halladay's curveball is out of this world: in 2011 it was thrown for strikes 10% more than the average curveball, it was put into play 1.5% less than the average curveball. The percentage of swinging strikes Halladay got with the curve rivals that of Brandon Morrow's slider (just 0.2% less whiffs, in fact). The fact that Halladay's curveball got only about 50% groundballs (low for a good curveball), and just 32% in 2010, when put into play doesn't really matter, because it was so seldom put into play in the first place. Although both lefties and righties found it very hard to make contact when swinging at Halladay's curve (it got a large number of called strikes, as well), righties found the pitch to be nearly unhittable.

Yes, all of those three previous pitches were thrown for strikes over 66% of time. Yes, having three pitches that can be thrown for strikes that often is quite amazing. But Halladay's splitter, after a below-average Strike% in 2010, beat those other three pitches comfortably by being thrown for a strike a whopping 73% of the time. That is about 13% above the Strike% of an average changeup. And yet it wasn't put into play more than the average changeup at all. Those extra strikes weren't just strikes, they were whiffs, generated by the bats of hapless batters left cursing at how an already extremely good pitcher didn't need an extra strikeout pitch. And they were probably right, as Halladay was already elite without the splitter (did I mention it got more than 65% groundballs?). But who knows, its addition may prevent or have prevented Halladay from losing effectiveness as he ages.

As some of you might remember, I created a spreadsheet to calculate an approximate xFIP based on Strike%, InPlay%, Foul% and Groundball%. My single pitch xFIP estimates (calling it aFIP for now :p):

The cutter and sinker are thrown more often than the other pitches, so they're not less awesome than the other pitches, per se. After all, a pitch is harder to hit if a batter rarely sees it and/or isn't expecting it. As you can see, his splitter has already caught up to the curveball as a second strikeout option. Not to mention both can be thrown for strikes to get ahead in the count, as well.

During his first five years with the Jays, Halladay was paid just $7.7 million, while his pitching in the last two of those seasons (2002-2003) alone would've been worth approximately $42.7 million on the free agent market. In 2004 Halladay signed a $42 million extension spanning four years, and would end up being worth $69.1 million (two seasons were shortened by injuries). Before the third year of that contract (and after consecutive injury seasons), Halladay's contract was extended to include the 2008-2010 period. In those three years he would end up being worth approximately $93 million, while getting paid just $40 million. At the end of 2009, after having been traded to the Phillies, he signed a three year extension with an option for a fourth year at $20 million per season. Having already been worth around $37 million in the first of those seasons (his second with the Phillies), the contract looks like yet another one that pays Halladay less than he is probably worth.

Chris Carpenter, another former Jays pitcher, pitching in the World Series this year. I'd like to hear your suggestions for scouting reports beyond Carpenter.