'Give him the Heater!', On the Movement of Right-handed Pitchers' Fastballs

Share All sharing options for: 'Give him the Heater!', On the Movement of Right-handed Pitchers' Fastballs

Pretty recently, I (and later jessef, as well) have looked at changeups, and specifically if they help reduce a pitcher's BABIP. It turned out that most of the pitchers who had low BABIPs over a significant sample size were pitchers whose best pitch was a changeup, fastball or both. Pitchers who sustained a high BABIP were often those who specialized in breaking balls. Jessef followed up using a different sample (more pitchers, but less innings), and he found an important link between flyballs and BABIP, and a possible link between changeup quality and BABIP (but not changeup percentage and BABIP). Now, the forgotten thing here is the quality and movement of a pitcher's fastball. Look up pitchers who struggle with HR/FB%, and you're likely to find a collection full of pitchers with relatively good offspeed stuff, but a bad fastball. But what constitutes a good or bad fastball? Certainly, a good contrast in speed and movement with the changeup, while throwing both fastball and changeup with the same motion and arm speed would be benefitial. Of course, pure velocity helps. And from watching Roy Halladay, we know that good sink or cut to a fastball can work wonders as well. It is that last aspect of the fastball that I was curious about: what kind of movement does a typical fastball have? And what other kinds of fastballs are being thrown?

To this end, I mapped out the average fastball (mostly four-seamers) of a number of pitchers in a pitch f/x grid. I looked at a lot of Pitcher's PitchFx graphs to look for fastballs that were in any way different from the ones I had already looked at, but I can't promise I've found all of them. The graph may have turned out a bit ugly, but at least it's colorful: 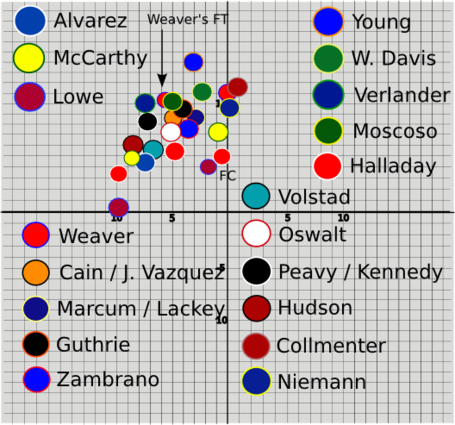 The first obversation I'll make is one I already referred to in my last article, which is that Chris Young has a pretty special kind of fastball. Throwing mostly that fastball has helped him to an astonishing .248 career BABIP (775 2/3 innings). In the interest of baseball science, I hope that man gets fully healthy and starts throwing rising fastballs again. With Young standing very tall at 6'10, it's probable that few pitchers could be taught how to throw a rising fastball the way he does.

Josh Collmenter has the most cut, and second most rise to his fastball of all examined pitchers. That he has a suppressed BABIP so far, as well as a high flyball percentage, should not come as a surprise, I think. Interestingly, while Jered Weaver's four-seamer is most similar to Collmenter's in movement, they have very different release points. While Collmenter throws over the top like no-one else does, Weaver releases as far away from his body as seems humanly possible. What they do share is that both of their release points are high, and both have pitching motions and release points that are very different from most other pitchers. Jeff Niemann doesn't, but he pitches with similar cut, albeit with a little less rise to his four-seamer. Of these three, Niemann throws a normal, sinking two-seamer (not shown), Collmenter just throws four-seamers, while Weaver uses a two-seamer that doesn't sink (much), but it does have a lot of running action compared to his four-seamer. The pitch is somewhat obscured by Moscoso's fastball, so I put in an arrow that points to where Weaver's average two-seamer can be found. Interesting: the rise on Weaver's two-seamer beats that of most four-seamers.

Wade Davis, like his teammate Niemann, throws both a two-seamer and four-seamer. Also like his teammate, his fastball cuts and rises more than the average fastball. However, in Davis' case it's more about rise than cut, while with Niemann it's the other way around. Brandon McCarthy, an interesting pitcher who reinvented himself this year and was actually very good (3.32 ERA, 3.30 xFIP), completes the category of four-seamers with cutting action, but interestingly his four-seam fastball does not combine that cut with rise, but even with a little drop compared to other four-seamers. The cutters of Derek Lowe and Roy Halladay are also in the graph to indicate that if some more drop is added, the pitch would be classified as a cutter rather than a four-seamer. Mariano Rivera's cutter, for those interested, has significantly more cut than these pitches, but less drop than these other cutters.

There's a cluster of fastballs "in the middle", where we find the fastballs of Carlos Zambrano, Roy Oswalt, Matt Cain and Shaun Marcum, and also those of John Lackey (same as Marcum), Javier Vazquez (same as Cain), Brandon Morrow (ever so slightly more rise than Cain), Zack Greinke (slightly more cut and rise than Marcum) and Jair Jurrjens (in the unoccupied middle of the "fastballs in the middle"). Interestingly, Oswalt got a very decent groundball percentage out of his four-seamer this year, while last year his fastball rose more and got less groundballs. Roy Halladay knows how to get groundballs with his four-seamer as well, even it might not truly be a different pitch from his "cutter". The stats do indicate his four-seamer/cutter is more effective at getting groundballs against lefties than it is against righties. On the other side of the spectrum of vertical movement, Moscoso is trying to emulate the likes of Weaver by using a rising fastball to get a lot of flyballs and keeping his BABIP down and so far (.221) he is succeeding. Jeremy Guthrie has a .273 career BABIP, though if that is due to the slight rise on his average four-seamer is anyone's guess. Bartolo Colon threw a four-seamer that was much like Moscoso's this year, yet he doesn't seem known for his BABIP-limiting ways (perhaps because he also throws a lot of two-seamers, and Moscoso doesn't).

While I've found more pitchers with a combination of cut and rise, the combination of run and rise is found in Verlander's heater. I wasn't sure if I would be able to find a pitch like this, because most fastballs that run are two-seamers that have some sink to them. I don't know if this kind of pitch is rare because it's ineffective or because it's hard to throw, but Verlander seems to make it work. Then again, he does throw extremely hard, so this kind of pitch might be a lot less effective if thrown at an average fastball velocity. In contrast to the fastballs that cut, Verlander's offering gets more groundballs versus righties than versus lefties. It does seem logical that movement to the inside part of the plate would cause groundballs while the opposite would be true for movement towards the outside of the plate. Jake Peavy and Ian Kennedy share the same fastball movement, with more run than the average four-seamer, but no extra rise. Interestingly, Kennedy's fastball picks up less groundballs than Verlander's does, despite the extra rise on Verlander's fastball. Verlander got 38% against righties and 28% against lefties in 2011, 36% against righties and 31% against lefties in 2010. Kennedy got 33% against righties this year, 25% against lefties. Verlander's fastball movement did not change, but Kennedy's did (in 2010 it moved more like a normal four-seamer). Jake Peavy also gets less groundballs than Verlander on his four-seamer, although he did have both more rise and run on his fastball in 2010.

At first, I was just going to compare the four-seamers, but in the end I couldn't help but throw in a few two-seamers as well. Daniel Hudson's offering probably isn't a two-seamer, but it does move like one. His "slinging" delivery and low release point are probably to blame. Click here for a nice camera angle on a Daniel Hudson fastball (his changeups are a thing of beauty too). Hudson had significantly less drop on his fastball in his limited time in the show in 2010, and his four-seamer's groundball percentage increased by 11% against righties, though against lefties it actually decreased a bit. Small sample size warning, obviously. Out of the true two-seamers, Henderson Alvarez's offering beats out McCarthy's and Volstad's in sink (though McCarthy's offering runs more), but Halladay's two-seamer is better in both sink and run than those three. Derek Lowe goes home as the winner of the most sinking sinker award this time, as Brandon Webb's offering (back in 2008) had just a tiny bit less drop. However, I recently found a starting pitcher who throws a sinker that sinks even more than Lowe's. Who is that? Well, I'll let you guess and then hopefully reveal it in a separate article on sinker movement.