He Never Complains When It's Hot: How Much Does Groundball-Rate Affect BABIP?

Share All sharing options for: He Never Complains When It's Hot: How Much Does Groundball-Rate Affect BABIP?

Over the past couple weeks we've been talking a lot around here about what factors affect pitcher batting average on balls in play (BABIP).  So far, the only factor we've found that I feel sufficiently comfortable saying is both under a pitcher's control (to a large degree) and has a large impact on pitcher BABIP is batted ball type, since flyballs in play are more likely to become outs than groundballs.

There are a number of reasons for this.  First, flyballs that go over the fence in fair or foul territory don't count as "balls in play."  So homeruns, which would often be hits even if they didn't go over the fence (there are occasionally the ones that just clear and would have been caught on the track, but plenty of homeruns would be gappers), are removed from the BABIP calculation.  This is not an insignificant event as somewhere around 10% of fair flyballs leave the park each year.  Second, the hardest hit balls in the air are often scored as linedrives, which don't technically count into the fangraphs flyball-rate (though, as Woodman pointed out the other day, they do count into StatCorner's Balls in Air).  Third, it is much easier for fielders to get to flyballs.  They have more time to get underneath them and do not have to throw a baserunner out once they've made the play.  Finally, and probably least importantly, a flyball in foul territory can count as an out but cannot count as a hit.  Compare this to a groundball in foul territory, which can count as neither, and flyball-babip is again suppressed relative to groundball-babip.  Combine these factors and it is easy to see why It is so much easier to get outs on flyballs.  In fact, even though misplays on flyballs typically do not get scored as errors (increasing BABIP) and misplays on groundballs typically do result in being scored as errors (reducing BABIP), flyballs still result in lower BABIP.  Also, by no means was this an exhaustive list so it's also possible that I've missed some other reasons flyballs become outs more frequently

However, although we've established that pitcher groundball-rate can inflate pitcher BABIP, we haven't actually looked at all at the degree to which BABIP is affected.  In 2011, AL pitcher, BABIP amongst qualified starters has ranged from Jeremy Hellickson's .223 to CC Sabathia's .318.  It should come as no surprise that Hellickson is an extreme flyball pitcher.  So was Hellickson lucky or is it simply the result of him inducing groundballs just 35% of the time and Rays having an exceptional defence?  Was Sabathia unlucky or was his AL-worst BABIP simply the result of an above-average groundball-inducing tendency?

I used a sample of all pitchers MLB-wide who pitched at least 300 innings over the past three seasons (since 2009) to test the relationship between groundball-rate and BABIP.  Here are the results: 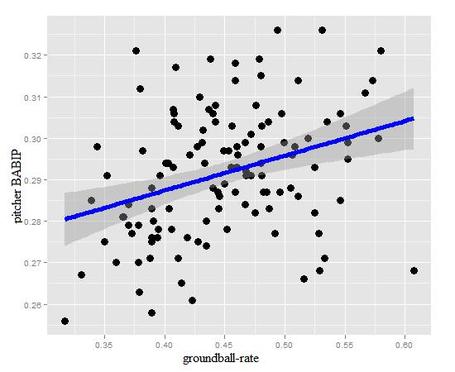 The effect is significant (p < 0.01, R-sq = 0.14) and the blue line represents the best-fit linear model.  The grey shaded area represents a 95% confidence interval for the mean (not for individual observations).  There is obviously a lot of variability here, but there is also a general trend with BABIP increasing as groundball-rate also increases.

Also, we see that, outside of other factors, such as defence and luck, even the most extreme flyball-rates do not explain pitcher control of long-term BABIP below .275 or so and even extreme groundballers wouldn't generally have BABIP greater than .310.  Defence is, of course, an important factor in BABIP but since there are 30 teams whose defences can fluctuate wildly from year-to-year (or even within a year) and only a handful of starters per team in any given season, it is difficult to isolate its effects.  There are, of course, likely to be other "hidden" factors within a pitcher's control but teasing out the nature of those factors has proven quite difficult.  Until we can figure out some way to test these predicted effects (movement, etc.), this is one way to estimate what a pitcher's BABIP "should" be.  Obviously, take all this with a grain of salt, but let's see what it means for our three Blue Jays starters who made 20 starts this season and will likely be back next year.

Ricky Romero: GB-rate: 54.7%, BABIP: .242 -- Some regression to the mean is in line for Ricky next year.  That doesn't mean he won't be good but for him to maintain a BABIP so low in spite of a groundball-rate so high is quite anomalous.  On the other hand, a disproportionate number of flyballs left the yard so that should mitigate the effects of his increasing BABIP somewhat next year.  Expect him to be great, but, unless he continues to improve his peripherals (certainly possible), not quite as great.

Brandon Morrow: GB-rate: 36.0%, BABIP: .299 -- Brandon's an excellent example of why this work is meaningful.  You might think he hasn't had bad luck on balls in play, but it's actually quite likely he has.  Given his extreme flyball-rate, his BABIP should likely have been quite a bit lower, as much as 15 points.  If his BABIP comes down like I think it should and his sequencing returns to normal, causing his strand-rate to drop with it, he could be in for a remarkable season next year.  There is, of course, the possibility that his sequencing is a result of his inability to pitch from the stretch (as has been discussed and analyzed here), but his inability to do so has not been completely established.  Also, we'll see if adding in a cutter (as he has apparently done the past few starts) will result in more groundballs next season.

Brett Cecil: GB-rate: 38.2%, BABIP: .267 -- In this case, normally we'd think Cecil has been extremely lucky on balls in play (though quite unlucky on flyballs becoming homeruns) this season.  While that is true, given his flyball-rate, he hasn't been nearly as lucky as we'd expect and I'd think that his poor luck on flyballs likely cancelled out any good luck he had on balls that didn't leave the yard.  It certainly wasn't a good season from Cecil, but it was not nearly so bad as it might look at a glance.

So what do you all think?  Does it make sense to you that groundball-rate should affect BABIP?  Does it make you feel better about Morrow's prospects as an extreme flyball pitcher?  Was this just a whole bunch of wasted words?

Thanks to Pavement's "Grounded" for today's title.