Chris Carpenter was selected out of high school with the 15th overall pick in the first round of the 1993 MLB Amateur Draft by the Toronto Blue Jays, just eighteen years and one month old. A year later he started his professional career with the Medicine Hat Blue Jays, where he pitched his way to a 2.76 ERA, with solid strikeout numbers but a somewhat worrying number of free passes given up. Before the 1995 season, he made the bottom end of Baseball America's top 100 prospects as the number 100 of that list. He split 1995 between the Dunedin Blue Jays (High-A) and the Knoxville Smokies at the Double-A level. His ERA was 2.17 in Dunedin, but 5.18 in Knoxville, even though his strikeout numbers were better at the higher level. Despite an increasing walk rate and a decreased strikeout rate, young Carpenter was bumped to number 82 in BA's top 100. He repeated Knoxville in 1996, and he had a 3.94 ERA there. The walks were still increasing in numbers, but Carpenter improved his strikeout rate and Baseball America now ranked him as their #28 prospect.

Carpenter made his MLB debut in 1997, but with a 5.09 ERA over 81 innings his rookie season wasn't very successful. He would spend some time in the Jays' bullpen in 1998, but he was still mostly a starting pitcher, and with a 4.37 ERA one might call this Carpenter's breakthrough season. In 1999 injuries limited his season, and his strikeout rate dropped a bit, but his 4.38 ERA was still decent and he walked slightly fewer batters. The next year he struggled, pitching to a horrible 6.26 ERA, and spending some time in the bullpen again. 2001 would prove to be his only full year as a starter with the Blue Jays, and his 4.09 ERA that year was the best he would produce in a Jays' uniform. In 2002 Carpenter has shoulder problems, and he managed only 73 innings, with a 5.28 ERA, and he would have shoulder surgery that september. The Blue Jays only offered him a minor league deal after removing him from their 40-man roster, an offer which Carpenter would not accept.

Instead, Carpenter's career continued with the Cardinals, and although the Cards had to wait until 2004 to see Carpenter start, he would then turn in three great seasons with ERAs of 3.41, 2.83 and 3.09 and much higher strikeout numbers than in his days with the Blue Jays. The 2005 season also earned him a Cy Young award. Injury problems struck again, though, and Carpenter would miss almost all of 2007 and 2008 with elbow problems. But Carpenter again came back strongly, registering a 2.24 ERA in 2009 and won the National League Comeback Player of the Year award. His 2010 and 2011 season were not on the same level of brilliance, but with ERAs of 3.22 and 3.45, Carpenter, now 36, withstood the effects of age pretty well, or perhaps he did not feel them at all? Of course, he also pitched and won that last game of the season, playing a big part in the Cardinals' 2011 World Series victory, so there's that.

(interesting stuff behind the jump) 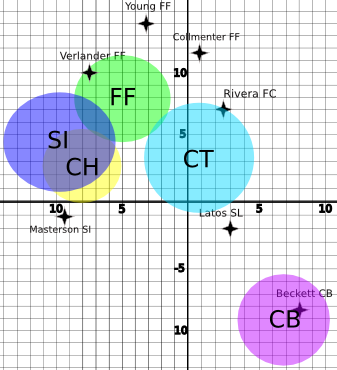 From this graph, it looks as though Chris Carpenter is a five pitch pitcher. That is, however, not completely true. First of all, his changeup is a pitch that over the last few years has rarely been thrown: about 2.5% on average, which hardly makes it a significant part of his repertoire. Secondly, his four-seam fastball is a new addition from the 2011 season, an addition PitchF/x has not picked up on yet (but I have, of course :P). It seems Carpenter was only a three pitch pitcher for much of his period of success (so far).

Carpenter's sinker generally averages around 91.5 mph, although in 2009 it was much faster with an average of 93 mph, and in 2011 he reached an average of 92.4 mph with his sinker/four-seam combination. His sinker seems to rely mostly on horizontal movement (in on righties) rather than great sink. His cutter has more sink than his sinker, and it also has pretty good cut on it. Averaging between 86.5 and 88 mph over the last few years, the cutter is just slightly faster than what we would expect from Carpenter if he threw a slider. Carpenter's curveball has a lot of downward movement, but at or below 75 mph is also quite slow for a pitcher who can throw as hard as Carpenter.

During his career best 2009 season, Carpenter threw fastballs only 46.6% of the time. Usually, he's closer to 50%, although with the addition of his four-seamer in 2011 he hardly increased his percentage of fastballs thrown. We can assume that in order to throw four-seamers, Carpenter cut down on the sinkers. The other half of his pitches are cutters and curveballs, each taking up about a quarter of his total pitches.

Carpenter throws his fastball(s) in any count, although in strikeout situations he will throw it a lot less in favor of his curveball. The curveball will also make an appearance as the first pitch of an at bat quite often, but will rarely ever be thrown when Carpenter finds himself behind in the count. Carpenter will regularly trust his cutter to do a job for him in almost any count, with the exception of 3-0 and 3-1 counts.

Although hitters rarely put his curveball in play, Carpenter also struggled to throw strikes (4.5% below average) with it in 2011, significantly worse than he did in 2010. The pitch had an average groundball ratio and no significant lefty/righty splits. The sinker/four-seamer combined for a lot more strikes, but they were put into play a lot. Despite the addition of the four-seamer, Carpenter's fastball combination still registered a very good groundball percentage against righties, and a decent one against lefties. His cutter had the biggest splits, but it was probably also the best overall pitch as it got a lot of strikes and wasn't put into play more than average. The cutter had a below-average groundball percentage around 40%.

Chris Carpenter hit free agency pretty early, at the age of 28. Unfortunately for him, at that point he had in no way proved he could be an average starting pitcher for a prolonged period of time. So his first free agent contract with the Cardinals earned him only a minimal salary over one year, 2003, in which he didn't pitch at all because he was recovering from his shoulder problems. He then signed on for another year, during which he was worth approximately 8.5 million dollars more than he earned. Following this great season the Cardinals of course picked up his option, which was just 2 million dollars, and gave him a two-year extension. In 2005 and 2006 he would provide about 35 million dollars worth more than he was paid.

After 2006 the Cardinals tacked on another four years to that contract, but Carpenter would be injured for almost all of 2007 and 2008, meaning the Cardinals paid Carpenter 20 million dollars for barely any production. Luckily for the Cardinals, Carpenter did come back strong and was worth approximately 18 million dollars more than he was paid in the 2009-2011 seasons combined. He signed an extension in september of this year for 2 years at 10.5 million dollars per season. As Carpenter has produced at an average of 20.5 million per season between 2009 and 2011, the man can feel the effects of aging and still produce surplus value to the Cardinals.

I was thinking of concluding this series of ex-Blue Jay stars with Shaun Marcum.