At 21 years and 6 months old, Shaun Michal Marcum was drafted in the 3rd round of the 2003 MLB amateur draft by the Toronto Blue Jays. He had previously pitched for Missouri State University, where he was acting as closer and had a 11.25 K/9 and 2.45 ERA, though in just 44 innings. After signing he dominated in short-season ball, still as a closer, but he was old for the league. In 2004 Marcum did well in both the Sally league (low-A) and the FSL (high-A), with more than a strikeout per inning and spectacular walk rates, but in 2005 his strikeout rates slipped and in 18 triple-A games Marcum's ERA was all the way up to 4.95. In 2006 he was shuttled back and forth between Syracuse and Toronto, and also shifted between the roles of reliever and starter, before he finally got a more permanent job as a starter for Toronto. With a 5.06 ERA and no indication that Marcum had had bad luck, his first season was not very good. However, in 2007 he cut down on the walks and got more grounders, resulting in a decent 4.13 ERA.

2008 would be both a lucky and an unlucky season for Marcum. While he increased his strikeout rate, got more grounders, and had a very low BABIP which helped him to a 3.39 ERA, he ended the season injured and had to undergo Tommy John surgery. The 2009 season was lost on Marcum, but he came back strong in 2010, pitching to a 3.64 ERA and setting career highs in strikeout rate and walk rate. After the season he was traded to the Milwaukee Brewers in exchange for Brett Lawrie. Marcum would continue his progress from the 2010 season in 2011, though you could argue that considering the down year for offense and the weaker league he actually had a less impressive season. Nevertheless, Marcum took the Brewers into the postseason with a 3.56 ERA, but in that postseason he would be blown to bits by the opposition to the tune of a 14.90 ERA and just 9 1/3 innings pitched over three starts. 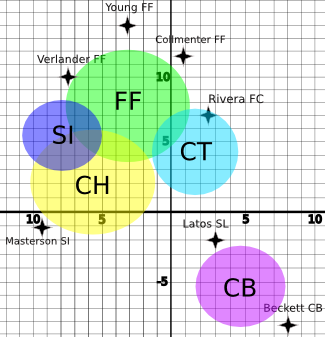 Marcum has a fairly average fastball in terms of movement, but his fastball velocity is very unusual: his average fastball is approximately 87 mph fast, with his sinker coming approximately 0.4 mph slower. His cutter comes in around 3-4 mph slower than the fastball, reason enough to assume that it is indeed a cutter and not a tight slider. However, the group of cutters can be split into a group of faster and a group of slower cutters, which may indicate the existence of a second "changeup" which mimicks the cutter's movement but comes in slower. Regardless of whether it is one pitch or two pitches, it has impressive horizontal movement away from right-handed batters and more downward movement than his sinker. Where most changeups seem to move like sinkers, Marcum's change actually has a lot more downward movement than the sinker, while not moving as much horizontally (in on righties). The change usually comes in at ~81 mph, but it was noticeably slower/more inconsistent in velocity last year, at just 79. The curveball also experienced a velocity drop, from 74-75 to 71.7 mph on average, making it a very slow curveball, though not especially so if one accounts for Marcum's slow fastball. The movement on Marcum's curve isn't anything special or remarkable.

Over the successful part of his career (beginning in 2007), Marcum has thrown his four-seam fastball only 25-30% of the time, with approximately 10-15% two-seamers thrown in for a total of just 40% fastballs. Marcum threw a staggering 30% cutters before he went down with elbow problems and cut that percentage down to 20-25% after he had recovered, while in the meantime he increased throwing his changeup from 20-22% to 25-26% of the time post-surgery. His curveball usage remained steady around 9% after the surgery, but following his trade to the Brewers, Marcum increased it to 14% while he cut the use of his fastball down to just 34% of the time.

Marcum is not a pitcher who lets the count decide for him what he is going to throw, only in 3-0 counts can batters comfortably sit fastball. He does throw his changeup more in strikeout situations than when behind in the count, but it's not a big difference. What is remarkable is that Marcum prefers to throw his curve early in the count, at 0-0, 1-0 and 0-1 counts. He uses the changeup a lot more versus lefties and the cutter is preferred more versus righties, while the fastballs and the curveball are used with the same frequency against both.

In 2010, Marcum's changeup was absolutely brilliant, but its effectiveness dropped dramatically in 2011. From 72% strikes to 63% and from 28% swinging strikes to 19% swinging strikes is a drastic change for the worse. How did Marcum cope with the loss of effectiveness on his changeup? For one, he replaced a large portion of his unspectacular sinker with a renewed (slower) curveball which he could actually throw for strikes, unlike the curveball he threw in 2010. This new (?) curveball did get put into play more and also got less groundballs than its 2010 predecessor. Marcum's cutter also grew in effectiveness by getting put into play less often, which is good since his cutter was worst out of all his pitches in 2011 in getting groundballs. Marcum's four-seamer also helped reduce the effect of his changeup's down year, by getting a few more whiffs and quite a few more groundballs. Although this did not reduce their HR% (naturally a very volatile statistic) much, improvement on that front came from the cutter and the sinker.

Shaun Marcum, at 29, will not hit free agency for another year, so he may have to wait for his first big payday until next season, unless the Brewers extend him first. If Marcum keeps pitching like he has the last two seasons, he's likely worth around 15-17 million dollars per season. If he gets that kind of money remains to be seen however, considering his injury history and related questions of durability, having exceeded the 200 innings pitched mark only for the first time in 2011.

I'm thinking the offseason is a good time to profile some of our own pitchers. Unless someone gets traded, the Jays won't have to face any of Ricky Romero, Brandon Morrow or Brett Cecil in 2012, so if I'm going to write about them it may as well be now.