In June 2005, Ricky Romero was drafted by the Toronto Blue Jays, and the world was not shocked. Despite the fact that Troy Tulowitzki, Cameron Maybin and Mike Pelfrey were more highly rated by at least a portion of the experts, J.P. Ricciardi drafted Romero. And because Ricciardi's drafting preferences were well known to the public, most had seen this coming for a pretty long time. There were a few who cried out against the pick, clamoring for a highly rated shortstop or a toolsy outfielder, but the majority accepted the selection and was hoping for the best. J.P. Ricciardi even went on record to compare Romero to Johan Santana "without the changeup". Which, if you consider how import Santana's changeup is to him, is not really that impressive.

The young "Santana-like-but-not-quite" pitcher got off to a decent start with high-A Dunedin, getting decent but unspectacular strikeout and groundball numbers. But then the, still relatively young, former Cal State Fullerton standout hit a wall with Double-A New Hampshire. In 2006, he had a 5.09 ERA over there, and in 2007 this only slightly improved to 4.89. With mr.Tulowitzki already playing great baseball in Colorado, it seemed as though Romero would forever be "he who was not Tulowitzki". But after more struggles in New Hampshire in 2008, Romero was given a promotion to Syracuse and promptly got a lot better results. And in Spring Training the next year, Romero was, perhaps surprisingly, the winner of a rotation spot. Since then, Ricky has improved each year to put himself firmly atop the Blue Jays rotation for the foreseeable future.

After joining the big club in 2009, Romero immediately put up an ERA below league average. The lefty sported an excellent groundball rate, a decent strikeout rate but a slightly worrisome walk rate. Romero was almost average at finding the strikezone, and hitters were making contact well below average, but hitters weren't biting on pitches out of the zone much. While PitchF/x and BIS data disagree on the hitters' discipline in 2010, there's no indication they were more aggressive that year. What they did do was make more more contact, and yet Romero's strikeout rate and ERA both improved.

In 2011, hitters swung at more pitches against Ricky, and Ricky happily profited from that by throwing more pitches out of the strikezone, and his contact rate dropped again. However, his strikeout rate also dropped ever so slightly, along with his walk rate. Along with an increase in home runs allowed, Romero's advanced stats do not agree with the massive improvement in ERA that came with his 2011 campaign. But with batters hitting just 14% line drives off Romero, we might see them swing harder and strikeout more if they try to make better contact. For what it's worth, DRS thinks highly of Romero's defense on the mound, both in limiting stolen bases and fielding his position. I think we, the fans, would agree with that based on what we've seen. 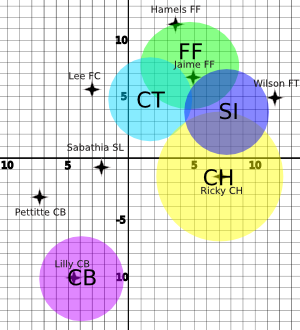 While I won't post Johan Santana's repertoire here, trust me that the comparisons are totally off-base. Santana's changeup is a straight change, whereas Romero's change just drops off the table, making it hard to hit even if hitters suspect it's coming. Also, Romero seems to throw three similar kinds of fastballs: a four-seamer, a cutter and a two-seamer/sinker. Santana just throws a four-seamer. Having established that, let's take a good long look at that curveball Romero also throws: it has great movement, comparable to the best curveballs out there in terms of vertical movement. Romero used to throw a slider as well, but after reducing its usage in 2010 he seems to have dropped it almost completely in 2011, which is why it's not on this pitch map. He introduced the cutter in 2010, possibly to replace the slider.

So what about velocity? Ricky has thrown his fastball at an average velocity of 91.6 mph, with the cutter coming in a bit slower. The changeup is a little more than seven miles per hour slower, and the curveball has average 76.3 miles per hour. Which, for a curveball that "deep", is quite impressive. Ricky's pitches were slowest in 2010, and fastest in 2011, which correlates closely with the evolution of the rate at which batters have made contact against Ricky.

It is no secret which pitch Romero's best is: it is quite comfortable his changeup. He has thrown it around 20% of the time, and he will throw it in almost any count against righties. Against lefties Romero uses the changeup sparingly, and more often in strikeout situations. The changeup gets strikes (a lot of them whiffs), and it gets groundballs like few other pitches (70% versus righties in 2011). The curveball, thrown approximately 10% of the time, is much more specialized pitch, which Romero uses for strikeout situations. Although it got a lot more strikes in 2011 than in 2010, it was still below average at getting strikes. But what Romero's curveball lacks in strikes, it makes up for in "unhittableness", which is not a word yet describes the curveball very well. The curve is very hard to make contact with if a batter swings, and if a batter does make contact, the ball will end up a grounder more often than not.

Romero's fastballs are harder to grade, because Pitch F/x does not recognize the cutter, nor does it classify the sinker all that well. What we do know is that with the addition of the cutter in 2010, Romero's fastballs got more groundballs than before against righties, and less than before against lefties. But while Romero's fastballs are good at getting groundballs, they seem average to below-average at getting strikes and at getting batters to swing and miss. It seems odd, then, that Romero threw more fastballs in 2011 compared to the two previous years. However, that could also have been the reason his changeup was even better than in previous years. Going forward, command of his pitches seems Ricky's biggest question mark, as the "stuff" seems really, really good.