Bluebird Links - Is Overbay a Steal for Pittsburgh?

Share All sharing options for: Bluebird Links - Is Overbay a Steal for Pittsburgh?

I realize writing 17 articles a day on the Jays during spring training is a tough job for Ken Fidlin (I'm pretty sure that equals 17 paragraphs for the Toronto Sun).  However, I never expected to see this headline:  "Former Jay Overbay could be steal of the off-season".  Really?  I find that incredibly hard to believe.  I like Overbay.  He was a useful hitter and good defensively.  But the steal of the off-season?

Berkman (nice spelling mistake in the article) isn't playing 1B this year so that's not the best comparison.  LaRoche is three years younger and is probably slightly better offensively.  And Huff, although ridiculously inconsistent, is much better offensively than Overbay when he's on his game - he's also more versatile.  Take a look at the FanGraphs WAR graphs and where they're at in their careers. They're both better players at this stage in their careers, and were compensated accordingly. 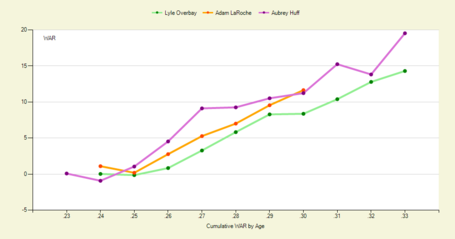 More after the Jump, and Links at the bottom.

He is a 20-homer, 40-doubles man with a decent on-base percentage, an excellent defender who will save some errors for the Pirates young infield.

At least one of those is true.

Overbay has two 20 homerun seasons in his 7 year career, one of which was last year.  I doubt that he eclipses 20 homeruns this year since the Rogers Centre is a homerun park, and PNC definitely isn't (4th versus 25th according to ESPN park factors).  Since 13 of his homeruns were at home last year...well, you do the math.

He's reached the 40 double milestone twice in his career as well, the last time being 2006.  A few of those Rogers Centre homeruns might end up being doubles next year, and maybe he'll hit 40 again.  But even that's a big question mark considering his age (34) and his probable regression.

Excellent defense?  Another half a point.  Overbay is good defensively, we've all watched him the past five years and we can all agree that's he's been good.  The numbers aren't really indicative of an excellent defender though.  According to total zone (baseball-reference), he's 20th among active first basemen in career dWAR.  According to FanGraphs, he's 10th among 22 qualified first basemen since 2004.  So, according to the numbers, he appears to be average to slightly above average defensively.  Not excellent.  For those "do you even watch the game" kind of people, I'll give Ken Fidlin half a point for suggesting that Overbay is 'excellent' defensively.

The chances of Overbay being a 'steal' are slim to none, in my opinion.  There is a reason he signed a one year deal, and there are much better candidates around the league for players classified as a 'steal'.

Butterfield’s return welcomed by Jays
Everyone's happy that Butterfield is back and healthy.

Blue Jays talk about their funkiest pitches
The Fosh, the knuckle curve, the hybrid screwball and the slip change. A few Jays pitchers talk pitch mechanics.

The Optimal Blue Jays Lineups
Parkes with some lineup simulations.

Perfect Time for Yunel Escobar to Return to Form
Thomas Pinzone is putting together season previews for individual players. Escobar is his first so check it out, and keep an eye out for more previews.

Aaron Hill Not A Lock To Rebound
Callum Hughson at Mop-Up Duty attempts to break down Hill's problems - he isn't so sure that Hill is due for a rebound season.

A Glimpse of The Future
Wilner with a summary of Friday's game against the Canada juniors. Nice oppurtunity for the youngsters (as young as 14).

Where Did The Pitcher Win Come From?
A fascinating look at 19th century rules and rule changes by Devon Young.

The Daily Single: Better Know The Count
Through the Fence Baseball has a daily, funny baseball photo. Here is Saturday's - how did this happen?

Frank Catalanotto retires after 14 seasons
And another ones bites the dust.