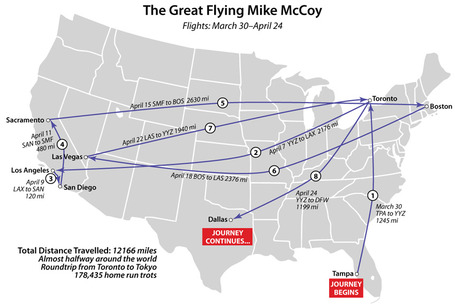 Mike McCoy, the Blue Jays' utility infielder and outfielder, is probably the most travelled player since the beginning of the season. In fact, it's become sort of a running joke here on Bluebird Banter of how many times he has flown back and forth (the jokes dampen the sadness of the Jays' many injured players). Of course, I can't just be happy with just knowing that he's been flying a lot, I had to go out to find out just how many frequent flyer miles he earned and map his journey out.

He started the regular season with the Jays, but was optioned to the Las Vegas 51s (AAA) on April 10, recalled on the 15th when Edwin Encarnacion was on a bereavement leave, re-optioned to Las Vegas on the 18th, re-recalled on the 23rd when Jayson Nix was placed on the DL. Team travel plus his travels between these cities from March 30 to April 24 totalled to an amazing 12,166 miles (19,579 km)!

Of course, besides these actual flights, there were at least a couple of incidents where he was on standby to fly out at any moment.

*After being optioned to Las Vegas, McCoy returned home for a day. It is uncertain whether he travelled from Los Angeles to San Diego by plane or car.

**After spending April 10 at home, McCoy joined the 51s who were in Sacramento playing the River Cats.