There is just something about comeback wins and walk-off wins. We endow those games with all sorts of special meanings: scrappiness, heart, desire, all that stuff. I don't know that come from behind wins really mean anything more than games that you lead from start to finish. I guess it is nice for the players to be able to think 'we did it before, we can do it again'

It is too bad that Reyes didn't pitch the way he had during spring. Everything he threw this spring seemed to be low in the strike zone. yesterday it wasn't. First impressions are tough to beat out of a fan's mind. If he was going to get hit around, it would have been better if he had been throwing his game so we could have said 'he can't do it'. Anyway, let's give him another start and see what he can do.

I have to say, again, how glad I am that Farrell didn't have Escobar bunt in the 10th inning. I have a feeling that if we hadn't used so many relievers to that point, that he may have bunted. But the 1 run strategy, if it worked right, would have tied the game and then we would have had to use more relievers.

Anyway, some links after the Jump, but before we'll remind everyone that you can follow us on twitter:

Johnny made the fancy buttons.

Everyone is writing about last night's game, here are a couple of links, one from Southpaw and one from Blue Jay Hunter.

Even Fangraphs mentions the game. I love the graph: 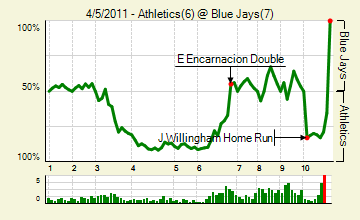 The Blue Jays will likely become progressively more aggressive about competing in the AL East, starting with the 2012 season. A playoff berth could be added by MLB, and Toronto's goal is to begin an extended period of contention. They've got a respectable 2011 club, but this coming offseason could be Anthopoulos' biggest push yet toward winning now.