That was just a great game to watch. Loved it.

Carlos Villanueva was much better in his first start. Today he gave up 3 runs in the second and 3 more in the 5th. 1 of the runs was unearned, because of an Aaron Hill error, but then Aaron made an amazing play earlier in the game and had a 2 run double, so it more than balanced out for him. Carlos went 5 innings, gave up 8 hits, 1 walk, 5 earned with 4 strikeouts.

Octavio Dotel pitched the 8th, got two quick outs and then gave up a triple to Brent Lillibridge. He might have got away with it but a passed ball by Jose Molina that allowed the run to score. We really are going to have to start blocking those pitches.

Frank Francisco came in in the 9th for a save opportunity. After a line out, double and strikeout, Frank got Paul Konerko to popup to right field but it landed between Bautista, Rivera and Hill. Very bad luck, he beat Konerko with the pitch. Unfortunately there is a lot of luck involved in baseball. Hardly fair that he gets a blown save for that.

Our pen did a really good job for 9 innings today, Ricky Romero is going to have to go deep in tomorrow's game.

We had 14 hits, Patterson's 5, 3 for Bautista, 2 each for Molina (whoops, late change, they changed the error to Alexei Ramirez, in the 13th inning to a hit, 3 hits for Molina) and Rivera and 1 each for Escobar and Hill. Davis, Thames and our third basemen, Nix and McCoy all had 0 fors. Edwin had a pinch hit strikeout in between Nix and McCoy. So our 3Bs haven't hit in the last 12 games. 0 for the last 44. Hard to believe. I mean they aren't great hitters but you would think that sooner or later something would fall in for one of them.

Thought I'd throw in the Fangraph, it is a thing of beauty: 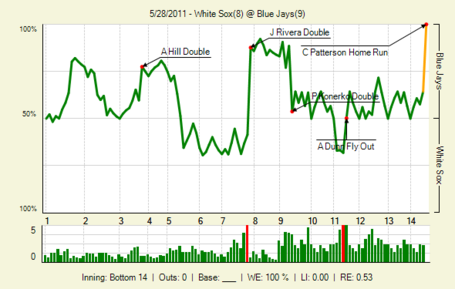