As some of you may have guessed, I think statistics are a very good way to understand the game better. If you do not like stats, the following article might not be a fun read for you, but you can of course skip the graphs and numbers and go directly to to the conclusion.

In this article I'll be analyzing Brandon Morrow's arsenal using the stats for his various pitches. I learned to use the website Texas Leaguers recently, which provides stats for all of a pitchers' pitches. It provides data on how often a certain pitch is thrown for a strike, how often it is put into play, how often batters whiff at it and how often they foul it off. Even more recently, I discovered Joe Lefkowitz's PitchF/x Tool, which has batted ball types for individual pitches, as well as lefty/righty splits. But while groundball rates are easy to understand (50% is good, 30% is baaaaad), I found it hard to quantify just how good a pitch is that you can throw for a strike about 70% of the time but gets put into play 25% of the time, for example. So I made an excel sheet that "simulates" how many at bats would end up as a strikeout, walk, groundball or ball in the air if a pitcher throws at that strike rate, foul rate and in play rate in every at bat, in every single count. Using that data I can of course calculate an xFIP stat for every single pitch a pitcher throws, assuming a .300 BABIP and a 10% HR/FB rate. (xFIP is an estimation of runs allowed per 9 innings, essentially predicting a pitcher's ERA)

Now that's obviously not a perfect way to determine how good a pitch is. One thing is that a pitch also influences how a batter reacts to a pitcher's other pitches. So a mediocre changeup will still be useful if it causes a batter to be late on a fastball, or take it for a strike. Another flaw in my simulation is that hitters will not have the same approach in every count. They'll probably foul off more pitches if they have 2 strikes on them than if they're ahead in the count. They'll also take a fastball for a strike a lot more in 3-0 counts than they would in 3-2 counts. So keep that in mind as I show you the results for Morrow's pitches after the jump.

Two notes here: one is that a sizable proportion of sliders were misqualified as curves by PitchF/x. Morrow uses his slider more often, and with good reason. The other note is that PitchF/x identified both a changeup and a splitter, but I listed them as one because I'm pretty confident they're the same pitch.

One obvious conclusion is that Morrow's slider is simply insane and possibly in the running for best pitch in all of baseball, even if you regress the numbers towards the stats on his curveball somewhat to account for misqualification of pitches. Another is that his fastball is also pretty darned good, if a little hard to control and easy to hit in the air (that is, in the rare case a batter puts it in play). His splitter and curve seem to be dragging him down, with his curve probably being worse than described here, as this sample includes a lot of sliders. Both the splitter and the curve aren't put into play a lot, but they're also hard for Morrow to command.

First thing that jumps out is of course: where are the curve and the splitter? Well, I didn't include them, because Morrow now only seems to throw his splitter 4% of the time and his curve 3.3%, and it was just too small a sample to include.

Let's look at some graphs and see if this is a matter of misqualification: 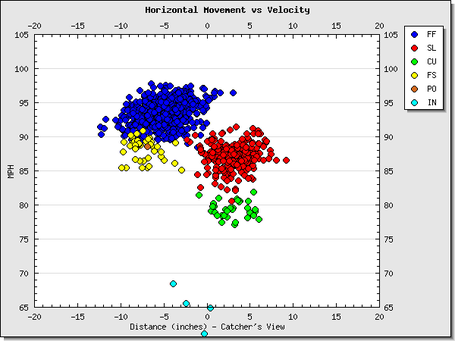 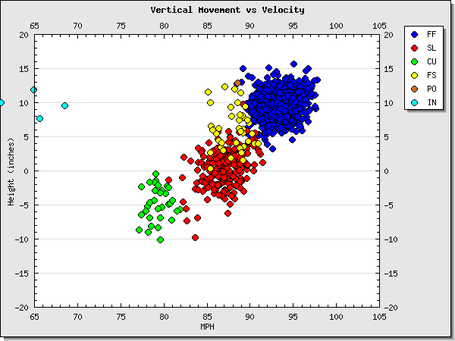 (Both images are from joelefkowitz.com)

A few curves seem to be misqualified as sliders, but the splitters seem to be thrown even less than indicated, with a few slow fastballs apparently misqualified as splitters. The graphs convey a simple message: 2011 Brandon Morrow is essentially a two-pitch pitcher, who has the hitters guessing fastball (68.2%) or slider (24.5%). Take a look at Morrow's graph from last year: 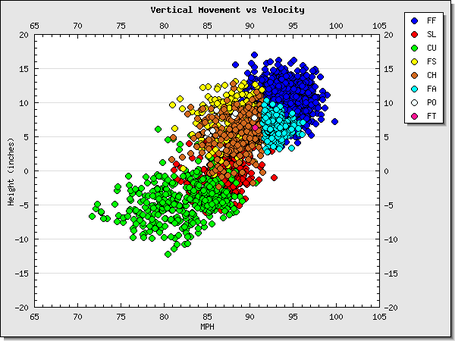 Note how a lot of sliders are misqualified as curves. 2010 Morrow was definitely a more versatile pitcher, throwing his fastball 55.7% of the time and using a splitter 16.6% of the time as well as two breaking balls that we don't know the exact percentages of (Fangraphs, using a different data source, thinks 15.3% sliders and 12.2% curveballs).

While Morrow's splitter and curve were hard to control, Morrow has made himself a lot more predictable as a pitcher by almost totally dropping both. It has reduced his already low groundball rate, as he now throws his flyball producing fastball significantly more than last year. Also, both slider and fastball have seen their efficiency reduced, possibly because of Morrow's increased predictability. While it remains to be seen if hitters can keep hitting both pitches hard, Morrow does have a high line drive percentage against of 24.5% (it was 17.8% last year). Morrow has also missed a part of the season through injury, and might simply not be at his best yet or he might be having a rough period.

It's hard to say whether his slider and fastball are simply "underperforming". If that's the case, then Morrow dropping his lesser pitches might have made him better in the long run. But perhaps the dropped pitches have increased Morrow's predictability and have made his fastball and slider permanently less effective until he starts throwing them again. All I can say for sure is that it will be really interesting to see if Morrow's pitches can "bounce back", because if they do, he's got one of the most lethal two-pitch combinations in the league.