Share All sharing options for: Into 2012 with a new record!

Ladies and gentlemen, let me wish you a Happy New Year from my mother's basement my room here in the Netherlands, where there's no snow or cold, but a lot of litter from all the fireworks. There's an interesting anecdote about the laws regarding fireworks in this country: fireworks are allowed after 10:00 AM on December the 31st, but apparently the intention was to only allow it after 10:00 PM. Whoops. Now, the country is split between those terrorizing the street with fireworks all day long, and those too scared to go out. In the neighborhood where I work, which is not a bad neighbourhood at all, even the policemen seemed scared to approach local fireworks abusers.

But you, the Bluebird Banter readership, don't come here for idle talk about foreign peculiarities. No, you've been coming here for Jays news and discussion, and boy, did we have some year doing just that! There was the Bautista contract and his subsequent monster year, the Vernon Wells trade, a new manager in John Farrell, the saga of Brett Lawrie, the MLB first-year player draft, the Colby Rasmus trade and the reported acquisition that did not happen (Yu), among other things that sparked a lot of discussion around here. So much in fact, that Bluebird Banter set not just a new record, but almost doubled the record number of visits in a month from 2010. To show you how much the blog has grown in number of visits, I've created a visual representation of the growth by plotting the peak months for all AL East SBNation blogs for the 2009-2011 period: 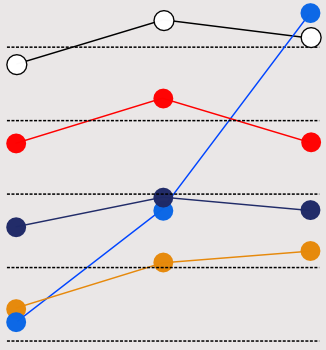 Yes, we're the light blue dots. The orange is of course Camden Chat, the dark blue is DRaysBay, the red is Over the Monster and the white is Pinstripe Alley. The horizontal lines represent 50k, 100k, 150k, 200k and 250k visitors in a month. As you can see, Bluebird Banter has gone from the most unimpressive peak month in the AL East in 2009 to the record holder in terms of peak month in 2011. While August was impressive at 252k visitors, December's 266k showed us that the blog's readership just keeps growing. It will be hard to reach the levels of Lone Star Ball and Lookout Landing, the top AL blogs in the SBNation network, but third in the AL is already pretty impressive. I'd say Tom's trip to Jamaica has been a very well-deserved holiday indeed.

Of course, this kind of growth wouldn't have been possible without the vigilance of our mods, or the great contributions from all the people who come here to share their thoughts. We've got a great membership, happy 2012 to all of you!