We look at the media's reaction to John Farrell leaving the Toronto Blue Jays and joining the Boston Red Sox.

Ever since Terry Francona's unexpected dismissal by the Boston Red Sox last off season, the Toronto Blue Jays and their fans had to deal with year of speculation over the future of manager John Farrell. It quieted a bit after the Red Sox hired Bobby Valentine to fill Francona's position, but intensified again towards the end of this season when it became clear that Valentine was a dead man managing. Jays fans, aside from watching their favourite team plummet in the standings, had to put up with open speculation of their team's manager's eventual departure to the Red Sox. 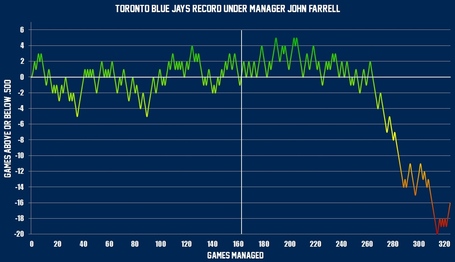 There were stories that there were severe problems between Farrell and Jays general manager Alex Anthopoulos, and while both men quickly came out to repudiate those claims, there was never a clear indication from either side that they were ready to stick with each other for the long term. Anthopoulos never offered any indication that Farrell would be his manager beyond 2013, and Farrell never said anything about wanting to stay in Toronto.

Despite all that, until maybe Friday or Saturday last week, I still thought that Farrell would, more likely than not, be managing the Blue Jays in 2013. Boston had interviewed quite a few candidates and I simply did not believe that they would be willing to give up enough to satisfy the Blue Jays' demands. Of course, this was before I learned that Farrell had told Anthopoulos that managing the Red Sox was his "dream job."

Now that I've had some time to think about it, I think I know how I feel about this whole situation. First, I'm surprised that the Blue Jays were able to get Mike Aviles for a manager who told his bosses that he wanted out. Aviles has a horrible on-base percentage (as many writers point out below), but he can be a solid utility infielder off the bench and can even start in a pinch--he's not a fringe guy on the 40-man roster. So I am happy with getting Aviles, even though I was dreaming of Dustin Pedroia or Clay Buchholz, I knew it would not have happened. Second, the Blue Jays' handling of the message throughout Farrell's departure was poor. We are all familiar with Anthopoulos' "cone of silence" policy, but it may have hurt the Jays' brand this time. He wasn't shy in attacking the Red Sox front office and the Boston media regarding their "gamesmanship" and the spreading of "false information" yesterday during his conference call--why couldn't he have stated this publicly a few weeks back? It may not have accomplished much in terms of the negotiations, but it would have made the Blue Jays look less like a door mat. Silence may be golden, but when the other side chirps incessantly, sometimes it's worth to step out to say something to defend oneself. Third, I am excited for a new manager to arrive in town, and whoever he will be, I hope that we wouldn't have to talk about changing managers for at least six, seven years.

But lastly, and most importantly, I am relieved that this is over and we can put it behind us and move forward. Well it's not quite over, as the Blue Jays' coaches are all still in limbo for 2013, but the main part of it is done with. I wish John Farrell and his family good health and happiness, and I wish the Jays the best of luck in picking the right manager this time around. Here are your Monday morning links:

Red Sox set to announce John Farrell as manager - TheStar.com
Richard Griffin's fantastic take on the story--this is worth a read even if you don't read any of the others. An important note not mentioned elsewhere: when Luke Farrell, John's son, needed radiation treatment last year, it was the Red Sox who set it up for their family, even though Farrell was already managing the Jays. Griffin makes a few good points on why things added up that basically made it easier for the Jays to decide to let Farrell go.

Poor optics, positive result - Sportsnet.ca
After this whole affair, Mike Wilner was also left with a bad taste in his mouth, specifically since it appeared that the Red Sox were able to march in and take whatever they wanted from the Blue Jays. But, he feels that the Jays came out positively on this trade, saying "this very well may wind up with the Blue Jays getting their everyday second baseman for the next couple of years in exchange for a manager who didn't want to be here." I understand what he's trying to say, but I sure hope that Mike Aviles is not our everyday second baseman next year (or beyond).

Bidding farewell to Farrell as Jays' nest raided by Red Sox - The Globe and Mail
Jeff Blair's take on the situation. He thinks that the Blue Jays' image has been quite hurt after they submitted to the Red Sox' bullying, and that the loss of Farrell will make fans realize "that the past two seasons will look a total waste."

Blue Jays gamble Farrell isn't Cox - Sportsnet.ca (Video)
Stephen Brunt offers a history lesson on how the Blue Jays lost manager to the Atlanta Braves and tries to connect it to the current John Farrell situation. I don't know how many people inside or outside baseball would think Farrell is anything like Cox.

Shi Davidi writes that "there are suggestions that first base coach Torey Lovullo, third base coach Brian Butterfield and extra coach Luis Rivera may now follow Farrell." I don't know who has been suggesting it to Shi, and how serious to take this suggestion. Lovullo I can see, as he is great friends with John Farrell, going back to Boston and Cleveland. The Blue Jays were very high on Luis Rivera, he managed the New Hampshire Fisher Cats to a first place finish and was credited for acclimatizing Adeiny Hechavarria in New Hampshire. Rivera is the Blue Jays' Spanish-speaking coach, and was present at Yunel Escobar's press conference. Out of all of them, though, I'd miss Brian Butterfield the most. He has been coaching with the Blue Jays since 2002, joining the team along with Carlos Tosca when Buck Martinez was fired. "Butter" has coached under Tosca, Gibbons, Gaston, and Farrell, and has always been awfully nice to Tom and our blog. Also discusses Farrell's relationship with Anthopoulos, and how for the first time, the Jays general manager directly contradicted a public statement.

Loss of John Farrell another example of Blue Jays coming up small - National Post
Bruce Arthur echos many Toronto fans who feel that John Farrell used his stint as a Blue Jay as an internship, but can anyone blame him? "This is Toronto. The great days don’t come around much, anymore."

Shi's second piece likens this Farrell situation to an extra-marital affair. I say: Blue Jays = Princess Diana, Red Sox = Camilla Parker Bowles. Shi also mentioned that Anthopoulos took subtle jabs at the Boston media over their reports of "friction." Apparently, the Red Sox agreed to announce the move jointly with the Blue Jays yesterday, but someone in their organization leaked it to the Boston media Saturday night.

Toronto Blue Jays got something for nothing in Farrell-Aviles deal - Toronto Star
Cathal Kelly believes that "sending Farrell to Boston in return for infielder Mike Aviles is the most one-sided trade in Blue Jays’ history" because no manager is worth a player as they are, at best, a neutral force. Also includes a link to the Boston Globe survey on what Bostonians think about their new managerial hire.

John Farrell: How do you spin this? - Toronto Sun
Bob Elliott offers readers two choices of what to think about this situation.

Who will be the Jays' next manager? - Toronto Sun

Bob Elliott offers odds for the upcoming Blue Jays managerial race. He's got Sandy Alomar, Jr. leading with 5 to 2 odds, and Tim Wallach, with surprisingly, Don Wakamatsu at 3 to 1 odds.

Dear John: Welcome back to the Red Sox - Boston.com
The Obnoxious Boston Fan nails it with this line: "Seriously, managing the Red Sox is a dream job for anyone who doesn't have it."

Making sense of the John Farrell deal: Five takeaways as the Red Sox got their target - WEEI
Alex Speier, the reporter who first broke the story last night, looks back at the situation with a few takeaways. One of them is that the Red Sox timed the negotiation well, having interviewed a list of alternatives to push down the Blue Jays' asking price. He doesn't mention about their strategy of leaking details to the media...

John Farrell Is The New Red Sox Manager - Over the Monster
Coverage of the hiring of John Farrell by our friends at Over The Monster. Ben Buchanan believes that giving up just Mike Aviles and not having to take on Adam Lind's contract made this deal a "win" for the Red Sox.

Mis-manage the situation - Boston Herald
Ron Borges doesn't understand the Red Sox' "breathless pursuit" of John Farrell, and says that the root causes of the Red Sox' problems won't be solved with his hiring.

Give Farrell final word - Boston Herald
Steve Buckley writes about John Farrell's problems in Toronto with Omar Vizquel and Yunel Escobar, saying that Farrell and the Jays were not a good fit, but "a manager who isn’t a good fit with one team might be the perfect fit with another."

John Farrell compensation talks took week-plus - Boston Herald
In his take on the Farrell hiring, Scott Lauber points out that Jon Lester tweeted a warm welcome to John Farrell even before the deal was official, and that a team source said that Farrell's "diverse" experience will help him relate well with "players, coaches, the front office, ownership, fans, and the media."

Your advice for new manager - Boston.com
Boston.com has a cute feature where readers can share their advice for new Red Sox manager John Farrell. It's annoying because each message is on a separate page but it's worth flipping through a few for the laughs.