In another part to our Manager Prospects series, we look at Sandy Alomar, Jr., a favourite to be the manager of the Toronto Blue Jays starting 2013.

Santos "Sandy" Alomar, Jr. was born in Salinas, Puerto Rico 46 years ago, two years before his brother Roberto Alomar. Sandy Alomar, Jr. is the son of former infielder Sandy Alomar, Sr. He was most recently the interim manager of the Cleveland Indians for the final six games of the 2012 season after serving as Manny Acta's bench coach since 2010. He is a current resident of Chicago, Illinois.

Sandy Alomar, Jr. was signed as an international free agent by the San Diego Padres in 1983 and in 1984 made his professional baseball debut with the low-A Spokane Indians of the Northwest League at age 18 as a catcher. He had a successful 1988 in the Padres' AAA affiliate in Las Vegas, hitting .297/.354/.496 with 16 HR, allowing only 3 passed balls over 90 games behind the plate, and was called up to the big leagues in September to join his brother Roberto, who was the Padres' rookie starting second baseman. Sandy made his Major League debut with the San Diego Padres on September 30, 1988. He had a single at bat--a strikeout--as a pinch hitter in that game.

Alomar was a star prospect, winning the Pacific Coast League MVP and The Sporting News Minor League Player of the Year honours two years in a row in 1988 and 1989 (and the Baseball America Minor League Player of the Year honour in 1989), but he found himself stuck behind 1987 National League Rookie of the Year Benito Santiago. He played just 7 more games with San Diego in 1989 before he was traded to the Cleveland Indians along with LF Chris James and prospect 2B Carlos Baerga for slugger OF Joe Carter. 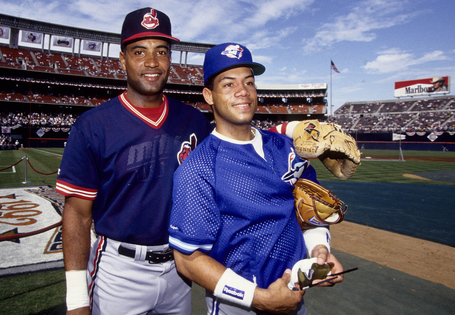 The Alomar brothers at the 1992 All-Star Game at Jack Murphy Stadium in San Diego. Photo credit: US PRESSWIRE

Alomar battled various injuries in the early 1990s, averaging just 259 plate appearances per season between 1991-1995. He had his best season in 1997, batting .324/.354/.545 with 21 homers and 37 doubles, receiving several MVP votes for his 3.6 brWAR season. He even had a 30-game hitting streak that year, but his best hit of the year probably came on a game-tying solo-homer against New York Yankees closer Mariano Rivera in the 8th.

He would hang around replacement level for the rest of his career, which took him to the White Sox, Rockies, Rangers, Dodgers, and Mets after playing 11 years in Cleveland. Over his 20 years, Sandy accumulated 11.6 brWAR, hitting .273/.309/.406 with 112 career homers.

Sandy Alomar, Jr. retired from the Mets in 2007, in which he only played 8 games with New York. In the offseason, he was hired by the other New York team to become a roving catching instructor in their farm system. He then returned to the Cleveland Indians for the 2010 season as Manny Acta's first base and catching coach. Before this season, he was promoted by Acta to bench coach, and after Acta's dismissal, Alomar was named as Cleveland's interim manager. In his six games at the helm, the Indians recorded a 3-3 record.

His Chance in Toronto

As one of the finalists in the 2010 managerial search, Alomar is a favourite for the job next year. His brother being a Special Assistant to the Organization probably doesn't hurt either. However, like John Farrell, Sandy Alomar has no managerial experience at any level besides those six games this year, and the Blue Jays may wish to find someone with a longer CV this time.

After the 2010 season he interviewed, and was rumoured to be one of the finalists, to be the manager of the Toronto Blue Jays. He has also interview for the Boston Red Sox and Chicago Cubs.

One of the biggest problems with John Farrell was his "losing of the clubhouse" last year, and the same thing was said of manager prospects Don Wakamatsu in Seattle and Manny Acta in Cleveland. I emailed Ryan from Let's Go Tribe, and he responded saying that managing the clubhouse should not be a problem under Alomar's watch.

Bob Elliott's first set of odds had Sandy Alomar, Jr. as the favourite at 5-to-2 odds, and tied as the favourite with 3-to-1 odds in his second book. I think 3-to-1 odds sound pretty right, so I'll go with that too. I would personally like to see him manage this team, but I do worry about taking on another skipper without managerial experience. I would hope that he leaves Roberto Alomar off of his coaching staff though.

This article is part of our Manager Prospects series: see also our articles on Manny Acta, DeMarlo Hale, Tim Wallach, and Don Wakamatsu.