Last year, in advance of rosters being set for the Rule 5 draft, I posted some information on the eligibility of all players in the Blue Jays system, including for future years. Throughout the past year, I have been periodically keeping this file up to date with the intention of doing the same thing this year, and was waiting initially for minor league free agents to be declared in early November to avoid having a bunch of names who would not be necessarily part of the organization in 2013. For various reasons, including overhauling the spreadsheets I keep to track and produce these lists to make things easier, and the blockbuster deal last week (my plan was actually to post that night if possible and then obviously I got sidetracked), I haven't got around to it. But the deadline for setting the rosters is tomorrow (Nov. 20), and so I want to get this up now.

I originally intended for that post just to be useful for the couple weeks preceding the Rule 5 draft, but I noticed that a number of people were using it as a reference file throughout the year. Therefore, my goal this year was to add some useful information, including signing bonuses were they are known, highest level reached for every player, and options used/remaining. I have added signing bonuses, but I did not get around to adding highest level reached and for most of these players options used/remaining is not meaningful since most have not played in MLB. If you think this is useful, let me know in the comments, and if there's a consensus I'll work on adding it soon.

SOME BACKGROUND ON RULE 5

The basic goal of the Rule 5 is to prevent teams from stockpiling talent in the minors, and every year a draft is held (usually during the Winter Meetings, but this is not required) in which MLB teams can select eligible players from other organizations who are not on their teams 40 Man (Major League) Roster for $50,000. That player then has to stay on the 25 Man Active Roster roster for the entire subsequent season, or be offered back to the original team. A player is eligible for selection in the Rule 5 Draft on the 4th Rule 5 draft since the he joined the organization if he was 19 or older when he joined, or the 5th Rule 5 Draft if he was under 19. In 2012, that means most high school players drafted in 2008 and college players drafted in 2009 are first time eligible, in addition to those from years prior.

Where it gets interesting is that last year I assumed that the age is determined according to the age of the player on the date he signed, but I subsequently came across the Major League Rules and found out this isn't the case. Rule 5(c)(1)(A) and (B) provide that the date used to determine the player's age is the June 5th preceding his signing. Moreover, 5(c)(1)(C) adds another wrinkle: if a player signs a contract in the time period the end of the team's season to which the player is assigned (usually late August/early September) and the Rule 5 draft, the contract is deemed to have been signed after the Rule 5 draft. This last provision has interesting implications for the signing of international free agent contracts in particularly, and collectively they divide the calender into 4 portions in terms of how the timing of a signing can affect the Rule 5 clock:

1) January 1 to June 5. If a player signs during this period, then his Rule 5 age will be determined by his age on June 5 the previous year. Depending on the player's age, he will be eligible to be selected in the Rule 5 either 3 or 4 years later. For example, recent signee Yeyfry Del Rosario was signed on May 28, 2011. His age for Rule 5 purposes is not his actual age at signing of 17, but his age of 16 on June 5, 2010 (not that it affects anything for him), and he will be eligible in 2015.

2) June 6 to end of assigned minor league season (late Aug/Early Sept). This is the most common signing time period, since it covers all draftees with the advent of an August signing deadline in the 2006 CBA (moved in July in new CBA). Since the international signing period opens on July 2, a number of high profile players will be signed in this period too. For these players, their age for Rule 5 purposes will be their age on June 5 or the same year, and likewise depending on age they will be eligible 3 or 4 years from the current year.

3) End of minor league season to Rule 5 draft (usually early December). Similar to players signed in the second time period, their Rule 5 age will be determined according to their age on June 5 of the same year. However, unlike those players, their contracts will not be deemed to have signed until after the Rule 5 draft, and instead of being Rule 5 eligible in 3 or 4 years from the time of signing, they will be eligible in 4 or 5 years.

4) After Rule 5 Draft to December 31.Similar to the players in the 3rd group, these players will be only be eligible 4 or 5 calendar years after they sign. An example is Rolando Segovia, who signed in December 2011 and will only be Rule 5 eligible in 2016.

My goal has been to include every player in the Blue Jays organization, at least whose signing has been publicly disclosed. In fact, I've driven myself half crazy trying to make sure. That said, if there's anyone missing, or anything incorrect, please let me know in the comments so I can correct it. Some of the players listed as 2012 FA (for example Casey Beck) are players that should have been eligible for free agency according to my files and calculations, but weren't declared free agents earlier this month by MLB, meaning they likely re-signed (these are not always reported). It's possible some left the organization/retired. There is more information below on the details, as well some collected thoughts. 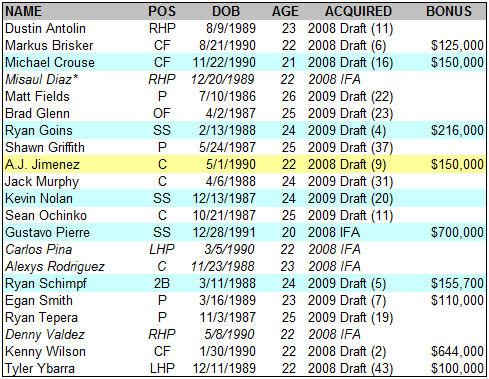 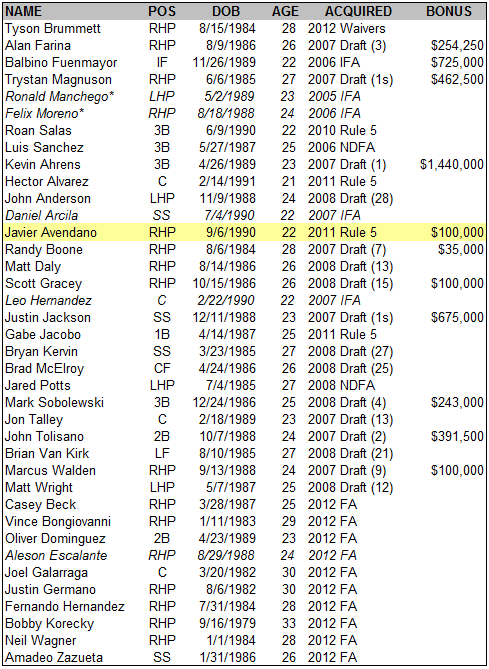 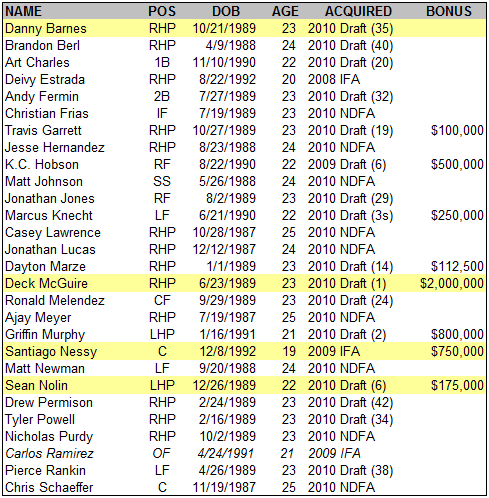 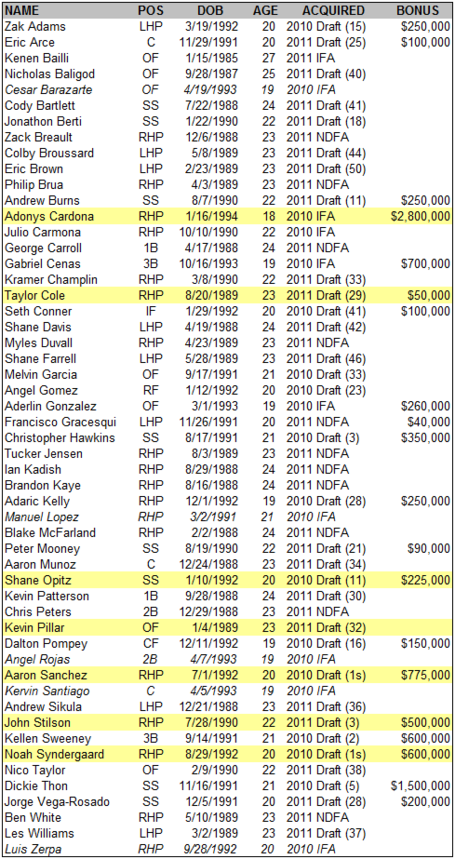 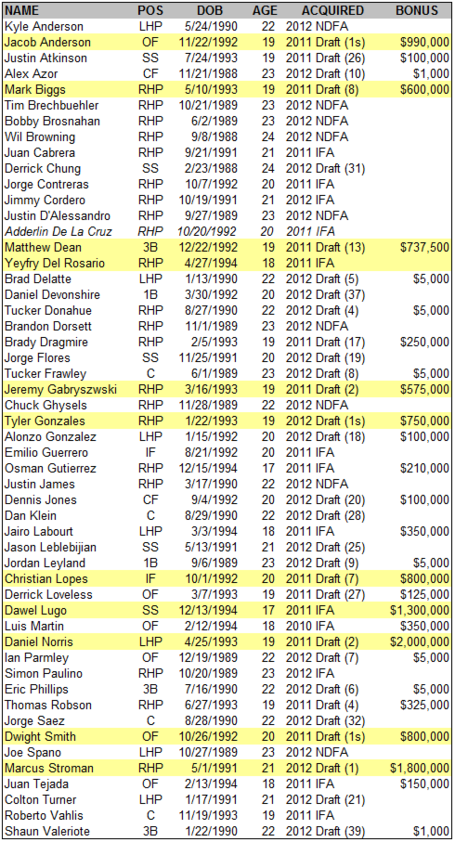 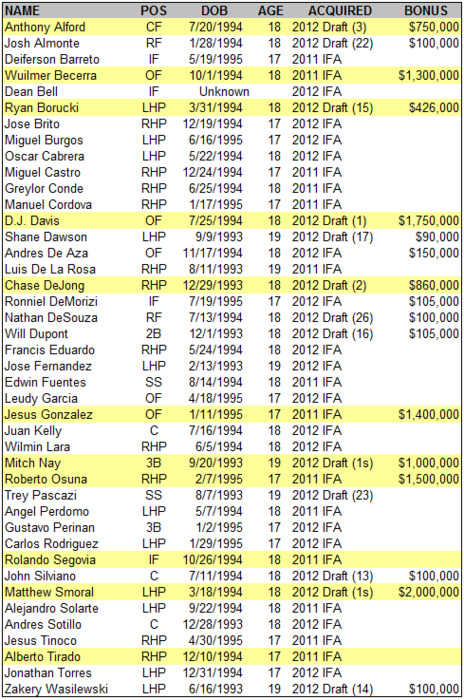 THOUGHTS ON WHAT THE JAYS WILL DO