From The Archives: Jays Blogosphere Reacting To Changes To Blue Jays Coaching Staff

Apparently we were freaking out about coaches leaving three years ago...

Share All sharing options for: From The Archives: Jays Blogosphere Reacting To Changes To Blue Jays Coaching Staff

Digging into the deep, dark, and dusty Bluebird Banter archives, I found a couple of stories written about the changes in the coaching staff after the 2009 season, when the Blue Jays saw the departure of pitching coach Brad Arnsberg (to the Houston Astros) and hitting coach Gene Tenace (to retirement). It seems relevant nowadays, with the departure of Torey Lovullo and Brian Butterfield and the free agent status of all the other coaches.

In this first one, Tom Dakers was quite angry at Alex Anthopoulos for allowing pitching coach Brad Arnsberg to leave for the Houston Astros because he and manager Cito Gaston had trouble working together. (The link to the Drunks' blog entry was pre-Score so click here for Stoeten's linguistically-colourful take on the situation.) I wasn't around back then (I came over to Bluebird Banter at the trade deadline in 2010), but I'm sure that I would've anger-blogged the same way Tom, Stoeten, and the Tao The Ack did. Some gems:

Since Brad Arnsberg came to the team we have been one of the best pitching teams in baseball [...] Cito......well Cito batted Kevin Millar in the cleanup spot several times this year. Doesn't that say enough. [...] So, basically, we have traded the best pitching coach in baseball for one year of Cito. [...] And well, I'm not drinking the koolaid anymore. I was sold on Alex, he didn't quite have me at hello, but he had me soon after. Now they have to sell me all over again.

You stupid m_____f___ing morons. All faith I was willing to give Alex Anthopoulos and Paul Beeston has been completely destroyed by one move. [...] Seriously, f___ this team. [...] How can anybody have the slightest f___ing faith in Anthopolous and Beeston now? They watched Gaston’s bumbling f___ing s___show of an attempt at managing a baseball team all year, and have now f___ing endorsed it? I’m sorry, but this is flat out r_______. [...] Throw away a season with a manager that won’t frustrate the living f____ out of anybody watching who isn’t a nostalgia-consumed twat.

the Tao The Ack :

And to think....I was set to post about "turning the page" this weekend and embracing the new Blue Jays front office regime. [...] F___ this. (Blog keywords: Brad Arnsberg, Cito Gaston, Depressed, f___ this and f___ that, I don't know what I'll do if the Jays trade Doc)

Well, then. Both Tom and Stoeten followed up with calmer posts (the Tao The Ack took the weekend off, kicking various objects). Click on those links to read them--quoting calm writing is much less fun. Tom included an interesting quote from Richard Griffin in his piece, examining a slight discrepancy between the Blue Jays' and the Astros' story over how Brad Arnsberg became available for the lateral move to work with his close friend manager Brad Mills. Sound familiar?

The benefit of hindsight shows that the moves didn't turn out too badly: Bruce Walton seems like a pretty decent pitching coach (lack of success with curing Ricky Romero notwithstanding) and became a friend of this blog, Cito Gaston and new hitting coach Dwayne Murphy built a monster Jose Bautista, and the team enjoyed a 10-win improvement in 2010. During Arnsberg's one-and-a-half seasons with the Astros, the team went 101-129 before he was fired. Even though the optics of the situation just looked bad at the time, with the Blue Jays allowing a good coach to leave just to keep a dinosaur, everyone forgot about it after a (relatively) successful year in 2010.

There is the potential of the Blue Jays completely changing over their coaching staff for 2013, and some fans are understandably upset about it. I just hope that the team does well next year and that by this time next year this whole mess would've been forgotten.

By the way, I've created a timeline to track all of the coaches in Blue Jays history and have noticed that the team has never experienced a complete turnover in their coaching staff. 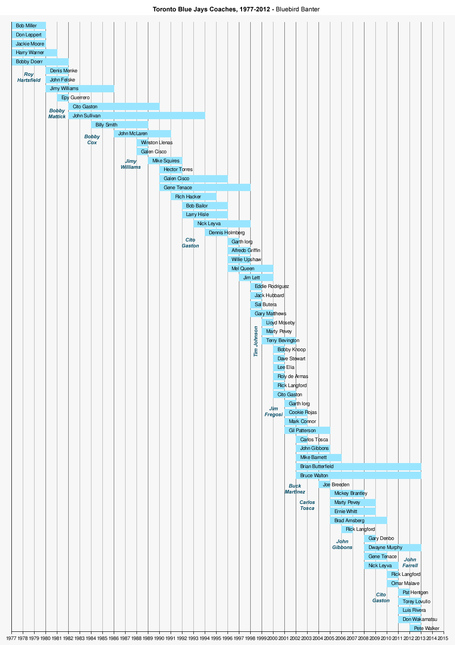