What an amazing turnaround it has been for the Toronto Blue Jays. After a season of injuries, missteps, and bad news, Blue Jays fans were understandably a little turned off from their team. As recently as one week ago, the majority of Bluebird Banters were less optimistic than they were in past years (according to our wildly unscientific poll), and I wrote a fairly lengthy piece on Keith Pelley's statement about making Blue Jays games fashionable again. Jump to a week later and we hear that the phones have been ringing off the hook in the Blue Jays' ticket office. The Blue Jays are indeed fashionable again, and former Blue Jay David Cone thinks that Toronto is now the "team to beat" in the AL East. All it took was the acquisition of six players!

Yesterday, we wrote about the big trade that brought Emilio Bonifacio, John Buck, Mark Buehrle, Josh Johnson, and Jose Reyes to Toronto, and took a close look at the numbers involved in that deal. Later in the evening, we posted that the free agent signing of Melky Cabrera was finalized as well. There were other happenings so I bring you this morning's early edition of Blue Jays Bites:

Managing To Keep A Secret... Could Gibby Be Back?

I have tried to ignore most of the tweets professing some insider information about whoever the next manager may be. A bunch of names have been tossed around, and yet no one can even produce a conclusive shortlist. This morning on the Fan, Mike Wilner said that the "vibe" is that Don Wakamatsu will be managing with Manny Acta possibly in the bench coach role. Then later Enrique Rojas said Manny Acta is in the Dominican Republic and would likely work on the TV side..... and so on.

But then, Bob Elliot of the Toronto Sun came out with a bombshell, just a bit after midnight, that John Gibbons will return as the Blue Jays' next manager. I don't know what source Elliot had, but he did point out that Gibbons and Anthopoulos were "spotted dining in Yorkville" on Sunday night. As of the time of writing, no other reporter has confirmed the news independently. I should point out that Elliot had tweeted earlier in the day that the Jays have phoned the Mariners asking about Mike Hargrove.

I would be excited if John Gibbons got the job--I loved him in his first stint in Toronto, especially the way he handled Ted Lilly and Shea Hillenbrand (really). I also loved his accent, so I'd love for him to be the one. Don't disappoint us, Bob Elliot! John Gibbons was most recently the manager of the AA San Antonio Mission of the San Diego Padres organization.

What do you think of this move? Let us know in the poll and comments below!

And In Other News...

Alex Anthopoulos will be speaking to the media this morning at 9:30 am Eastern. The press conference will be broadcast live all over Sportsnet and over the interwebs at BlueJays.com. I want to tune in just to see the look on his face. He will likely get questioned about what other starting pitching he is looking for, which of the four catchers he will be keeping, and about who he'll protect for the Rule 5 draft--and he won't offer actual answers any of those questions. 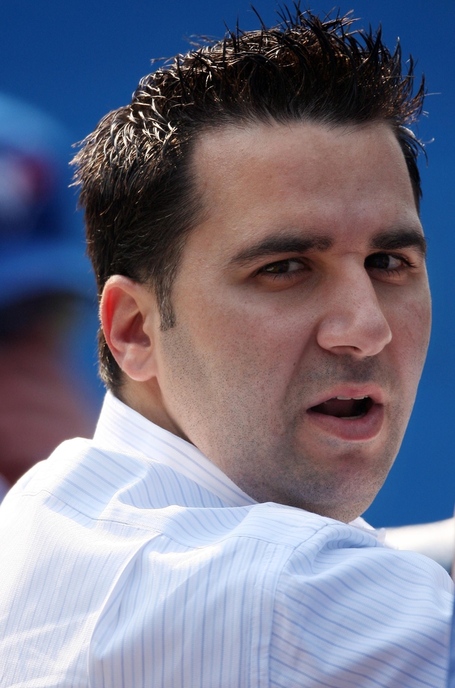 "Ya, baby. I told ya I'd make it happen." Photo credit: Tom Szczerbowski-US PRESSWIRE

Right after the trade was made official, this image appeared on Blue Jays.com and Twitter went a little crazy with everyone trying to interpret who's not on there and why not. I think it's sort of curious why J.P. Arencibia's jersey was not on there, but I won't read too much into it. It's not like they were going to put all 25 jerseys up there and some players were going to be dropped. For example, we don't see Casey Janssen, Sergio Santos, Maicer Izturis, and Steve Delabar hanging there--and Colby Rasmus was 98% cut off on the far left.

No More Poutine In Canada

MLB Trade Rumors continues the rumours that the Texas Rangers are interested in Blue Jays catchers J.P. Arencibia and John Buck. Arencibia, an active tweeter, doesn't think so, tweeting that "[e]very move the jays have done dont make it to rumors... If u read it, it's prob not true!" and again that he was "#NotGoingAnywhere," something that he has tweeted several times already. But the most interesting tweet (beside the one about poutine) was this:

Arencibia will be on Sportsnet 590 The Fan this morning at 8:40 am. Will he say what he knows then? Probably not. My guess (and it is a wild guess) is that his general manager may have told him that he's not being actively shopped, but I wouldn't believe it is Anthopoulos' style to leave anyone off the table. I also don't think it is likely that he already offered to buy out Arencibia's arbitration years.

Joel Carreno was designated for assignment to make room for the five Major League players coming from the Marlins. Someone else has to be removed for Melky Cabrera. Candidates are Cory Wade, Evan Crawford, and Mike McCoy. Am I crazy to think the Blue Jays might try designating Adam Lind again, just to dare other teams to pick up his contract? I think not. To say good bye to Carreno, here is Joey Kirby's Photoshop job one last time--don't forget, he's low fat! 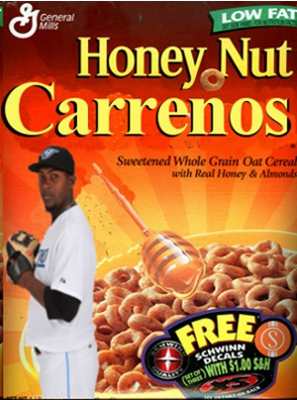 Another secret that has been well kept is what the new Buffalo Bisons logo is going to look like. I have seen no leaks of it yet. I guess we will all have to wait until tomorrow afternoon's press conference! Bisons gear will be available at a fan event in the evening. Meanwhile, the Bisons confirm that last year's AAA Las Vegas 51s manager Marty Brown will continue his role with the new affiliate. Sportsnet 590's Jeff Sammut spoke with Brown about returning to manage in Buffalo, and what it will be like playing in the International League compared to the Pacific Coast League.

It's Not A Lie If It's The Truth

Before signing a five-year, $65-million extension, Alex Anthopoulos promised his star Jose Bautista that the Blue Jays will "load up for a big run" when the time was right. Bautista is ecstatic that the young general manager kept his word, saying that his "level of confidence as an athlete has just been quadrupled" in Shi Davidi's piece. Now, contrast this club's current philosophy to J.P. Ricciardi's reign and the Miami Marlins. I think that these moves have really helped the way this club is seen throughout the league.

I really don't get this rabid hatred of John Farrell around Blue Jays fandom. I really don't think he regrets leaving the Blue Jays for the Red Sox because of these moves, but a whole bunch of Jays fans have been taunting him for it. I think it just makes Toronto fans look childish. I mention this because of the comments in this WEEI article(language alert) on John Farrell's comments about the Blue Jays' moves. Farrell was somehow surprised that his ex-boss, a person who he had repeatedly told about his desire to leave for a division rival, did not share offseason plans.

Oh and he also said that while "[t]here's passion in both [Toronto and Boston]," Boston has a "more intense environment, which is an attraction in and of itself."

MjwW does us all a big favour and compiles this year's Rule 5-eligible players in the Fanposts section. A.J. Jimenez will probably be the one that the Jays will definitely protect, but as MjwW points out, there's already four other catchers on the 40-man roster. And yes, please continue to add their signing bonuses. Thanks!

Signings That Would Have Been Bluebird Banter Headlines Two Weeks Ago

The Blue Jays have re-signed right handed pitcher Bobby Korecky to a minor league contract. He elected to become a free agent after being outrighted right after the end of the season. Korecky pitched fewer innings with the Blue Jays last year than Jeff Mathis. He had spent the past two seasons splitting time between AA New Hampshire and AAA Las Vegas after the Jays signed him from the Winnipeg Goldeyes of the independent Northern League, and will likely be on the Bisons' starting staff to begin the year. No word on whether he will receive an invitation to big league Spring Training (but I think he will).

Last week, the Jays signed right handed pitcher (yes another one) Neil Wagner to a minor league contract with an invitation to Spring Training. I'm not even going to try to pretend I know who Neil Wagner is.

Article picture comes from Bluebird Banter writer Picture by leaflover4ever, who started her own art blog at Emily's MS Paintings.