I'm ready for baseball to start and it is November. It's going to be a long off-season.

Ever had writer's block? Well, let's not call it writer's block, maybe blogger's block. I just haven't been interested in writing about anything. There has been so much going on this off-season and it seems we've talked it all out. There was the big trade, and I've got nothing new to add. I'll be excited to see the new team. Even the Iturises (or Izturi?) signings have been talked out enough. How many more days till spring training? Maybe hibernation would be a good thing.

The new manager is an old manager. I think he's a good choice (yeah we talked about him), I think any of 15 guys would have been a good choice, but then I thought John Farell was a good choice and boy was I wrong on that. That one really couldn't have turned out much worse. Maybe Emile Rogers will do a great job for us and sitting through two years of Farrell pining for the Red Sox job will have been all worthwhile.

Apparently, Brian Butterfield was, once again, a runner up. I would have been happy if he got the job, if for no other reason than it would have kept him away from the Red Sox. Looking back, he would have been so much better if he was the choice over Farrell two years ago. I have no doubts that he would have been a good choice for manager.

Among all the other things that have happened over the past couple of weeks, but Buffalo Bisons introduced their new manager, who just happened to be former manager of the Vegas 51's Marty Brown (I wonder if Marty felt he should have been considered for the Jays job?) (I wonder if Marty was considered? It isn't like we thought John Gibbons was being considered) and their new logo: 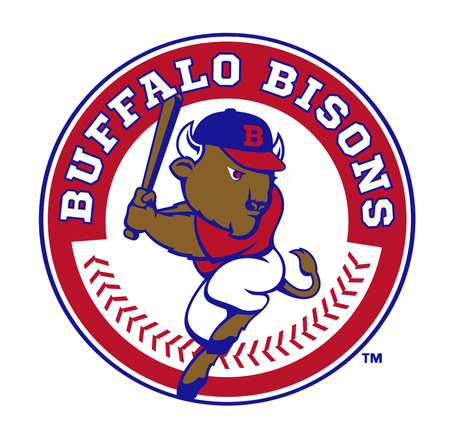 It has been a busy month for for the Jays, potentially 9 new members of the active roster and the Winter Meeting are still a week away. I wonder what more Alex has in store for us. With all the other stuff that has happened, I had forgotten about Jeremy Jeffress.

I'd like to go to the winter meetings one day. This year it is in Nashville, which is on the list of places I'd like to visit one day. The trouble is, being in a city with that many guitar shops is a dangerous thing for me. I have a habit of buying guitars, which doesn't bother me, but I'm pretty sure my wife will divorce me if I buy another. Hmmmmm, a new guitar or stay married. Tough choice.

You know, I figured I'd start writing and come upon something I wanted to talk about, but it didn't happen. Maybe by the end of the Grey Cup, after several beer, I'll have something I want to write about.