According to the National Post's John Lott, the Toronto Blue Jays and manager John Gibbons has named their coaches for 2013.

Here is the press release from the Blue Jays:

The TORONTO BLUE JAYS have announced five coaches to Manager JOHN GIBBONS’ staff for the 2013 season. DEMARLO HALE joins the organization as Bench Coach, CHAD MOTTOLA will serve as Hitting Coach,DWAYNE MURPHY will be First Base and Outfield Coach, LUIS RIVERA will move to Third Base Coach andPETE WALKER will serve as Pitching Coach. The Bullpen Coach position has yet to be filled.

HALE, 51, joins the organization as bench coach after spending the 2012 season as third base coach for the Baltimore Orioles. He played five seasons in the minor leagues and posted a .267 batting average with 28 home runs and 234 RBI while playing most of his games at first base, third base or in the outfield. He began his coaching career in the Red Sox organization in 1992 and has coached 11 seasons in the Major Leagues for the Texas Rangers as first base and outfield coach (2002-2005), the Boston Red Sox as third base coach (2006-2009) and bench coach (2010- 2011) and Baltimore in 2012.

MOTTOLA, 41, will be making his Major League coaching debut after spending the last three seasons as hitting coach for the Las Vegas 51s (AAA). He began his coaching career in 2008 as hitting coach for the Gulf Coast Blue Jays, moved to roving minor league hitting coach in 2009 before joining Las Vegas for three seasons. Mottola was honoured by the Blue Jays following the 2012 season with the Bobby Mattick Award for excellence in player development. The former outfielder appeared in 59 games in the Major Leagues hitting .200 with four home runs in parts of five seasons for Cincinnati (1996), Toronto (2000, 2006), Florida (2001) and Baltimore (2004). In 16 minor league seasons he played 1,800 games and hit .280 with 249 home runs and 1034 RBI.

MURPHY, 57, returns for his sixth consecutive season on the Toronto staff and his 10th in the organization. In 2013, will be responsible for outfield defence and returns to serving as first base coach a position he held for the 2008 & 2009 seasons prior to serving the last two seasons as hitting coach. The six time Rawlings Gold Glove Award winner played 12 seasons in the Majors posting a .246 average with 166 home runs, 609 RBI and 100 stolen bases.

RIVERA, 48, has spent the last two seasons on the Major League staff as Coaching Assistant where he worked with players prior to the game before moving to the stands where he would scout the game. Rivera joined the organization as Manager of the New Hampshire Fisher Cats in 2010. The former major league infielder spent three seasons as the Cleveland Indians infield and first base coach after coaching and managing six seasons in the Cleveland organization (2000-2005). Posted a career batting average of .233 with 28 home runs and 209 RBI while playing for Montreal (1986- 1988), Boston (1989-1993), New York Mets (1994), Houston Astros (1997) and Kansas City (1998). 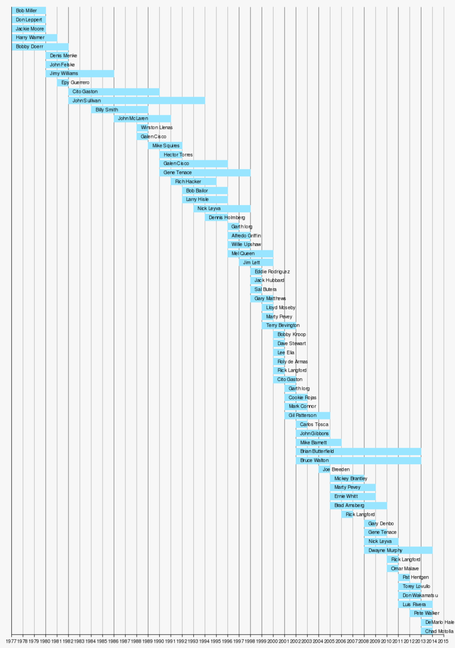