Share All sharing options for: Edwin Encarnacion Does Not Win Silver Slugger Award

Toronto Blue Jays designated hitter Edwin Encarnacion was the favourite coming into today to win his first Silver Slugger Award today. The award, which is appropriately a silver-plated Louisville Slugger bat replica, is granted to the best offensive player at each position in each league. Encarnacion was the best offensive designated hitter in the American League in 2012.

However, Major League coaches and managers decided to award the Silver Slugger to Kansas City Royals DH Billy Butler. Butler had a great season, hitting .313/.373/.510 with an OPS+ and wRC+ of 140, hitting 29 homers and 107 runs batted in. He accumulated 3.2 WAR in 138 games at DH and 20 games at 1B. He was selected to the All-Star Game, and was greeted loudly by his hometown crowd. Congratulations Billy! Even though I think Encarnacion was a better choice for the honour, Butler had a tremendous season as well.

All across the board, except for batting average, Edwin Encarnacion had recorded better numbers than Billy Butler. However, Edwin played just 82 games at DH, spending 68 games at 1B, three at LF and one at 3B. The position split has been cited as why the position-based award went to Butler. But in 2002, Manny Ramirez won the DH Silver Slugger while DHing 51 games and playing in the outfield for 68 games, and more recently, in 2008, Aubrey Huff won as a designated hitter while DHing 98 games and playing 57 games on the field.

This should, of course, not tarnish Encarnacion's tremendous season. He carried the Blue Jays offense after Jose Bautista went down with injuries. He started off the season in the 5th spot in the lineup before his solid play forced manager John Farrell to declare him the club's cleanup hitter in early May, and later was bumped up to third when Bautista was on the disabled list. His smile, which appeared much more often this year, would light up the dugout.

Encarnacion was awarded by the Blue Jays in mid-July when he signed a 3-year, $29 million contract extension, which includes a $10 million club option for 2016. I guess that's the more important award. 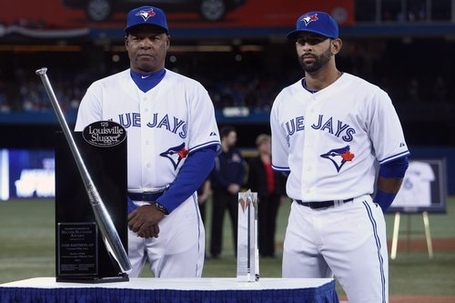 Unfortunately, Edwin Encarnacion will have to wait one more year to see his name join that list. For the heck of it, let's see him t-rexing one more time: