Dumb Gift Idea Of The Day: What Not To Get For A Blue Jays Fan

The mean writer at Bluebird Banter is back with a piece about Toronto Star columnist Raju Mudhar.

Share All sharing options for: Dumb Gift Idea Of The Day: What Not To Get For A Blue Jays Fan

First of all, I'm sure Raju Mudhar is a nice man, and I'm sure people like what he does as the Toronto Star's consumer technology reporter. I am not trying to say he is a bad journalist or that he is unprofessional--I'm sure he is. I am just expressing my own opinion; I am not the Voice of Journalism, nor a faux elitist (everyone knows I'm a real elitist).

OK with that said, Raju Mudhar made a freakingly dumb Christmas gift suggestion yesterday in his column. He started well:

With all the recent trades and acquisitions, it’s safe to say that excitement for the upcoming baseball season in Toronto is at an all-time high.

That's true! And if you stopped reading at this point, you would conclude that Mudhar had written a short, but sensible, article on the Blue Jays. But then he goes on:

So for the uber fan on your list, how about a Major League Baseball-approved Blue Jays Schedule Watch?

Uh.... how about not. First, a lot of us here are nerds, and many of us are proudly so, but wearing one of these schedule watches takes one from cute-and-loveable nerd to that annoying guy who calculates his restaurant tip to the penny on a calculator watch. And second, Major League Baseball approves of a ton of crappy merchandise, so that should never be used as a reason to purchase anything. I mean, MLB approved of this: 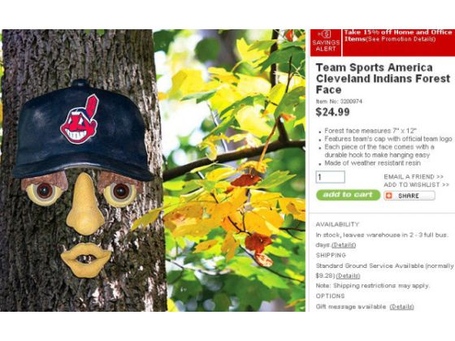 Image was taken from the Orange County Register.

I have no idea what a "Forest Face" is and who the heck would deface trees this way but somehow Bud Selig's people got together with Larry Dolan's people and found a way to make mother nature look racist. By the way, don't spend $24.99 on it on MLB.com when you can get it for $19.99 on Amazon, where the official description says that the you can "bring your trees to life with these officially licensed forest faces," because water is so expensive.

Sorry I got distracted. Back to the schedule watch recommendation:

While it certainly isn’t the most cutting edge tech, it does come preprogrammed with the entire MLB schedule, with a reminder each day of who the Jays are playing.

No, indeed it isn't the most cutting-edge tech. Hell, it doesn't even have the most cutting-edge Blue Jays logo on it. Now Raju Mudhar may not be a sports fan, and he may not know anything about sports or the Jays' recent change in logo, so it's understandable why he may think a baseball fan would like this. But how does a consumer technology reporter recommend their readers to purchase a $134.88 digital watch whose sole additional value compared to those mid-'90s G-Shocks is that it displays a team's baseball schedule when there are such things as televisions, computers, smart phones, and tablets? And of course, don't forget this free thing that the team gives away every year? You can buy a Kindle for about that price, and the Playbook is less than $20 more. Technology has moved on past the era where folks needed every thing stuffed into a wrist watch. Even folks like me who have BlackBerrys can easily look up both the schedule as well as scores and standings.

And I wonder which year's MLB schedule it will come pre-programmed with. On the FansEdge.com website where the watch is sold, it mentions that you need to update the schedule by connecting the watch, via USB, to the Internet every season. That means postponements and other schedule changes won't be updated. Why the hell would anyone who knows what USB and Internet are need this at such an outrageous price?

It even plays "Take Me Out to the Ball Game" at the start of the game, so you will always know when the boys of summer take the field.

Yes, it also beeps out the seventh-inning stretch song at the beginning of the game! If you do receive this as a gift, I hope that there's at least a way you can download "OK Blue Jays" on to it.

This Blue Jays schedule watch is overpriced, underfunctioned, unfashionable, and is emblazoned with an old logo that is not old enough to be retro. So please, please, please, do not get this for the "uber" Blue Jays fan in your life. If you are considering some sort of Blue Jays-themed timepiece, consider this one posted by the Blue Jay Hunter or this one from the same company that makes the schedule watch.