A short look at how good R.A. Dickey is and whether R.A. Dickey's spectacular 2012 was just a mirage or may portend things to come in Toronto.

As you all know by now, the Blue Jays have traded for 38 year old phenom R.A. Dickey. Now, the point of this post isn't so much to analyze the whole trade (Jays received Dickey, Josh Thole, and Mike Nickeas; Mets received Travis d'Arnaud, Noah Syndergaard, John Buck, and Wuilmer Becerra) from a value perspective as it is to focus on the centerpiece of the deal. Essentially, why are the Jays giving up some very valuable pieces for a 38 year old with a career ERA of 3.98? Was his Cy Young campaign a fluke or should we expect another fantastic season?

Well, even though projection systems do a pretty good job of projecting players across the league, there is a great deal of uncertainty in projecting any one player's performance a year ahead. Not only is this uncertainty greater for pitchers than it is for position players but, in the case of R.A. Dickey, we're talking about a pitcher who really broke in 2012. So there are two major questions here: 1) whether Dickey's 2012 was so much better than his previous seasons that we should not expect him to repeat that level of play; and 2) whether Dickey outperformed his peripheral stats and Dickey in 2012 wasn't quite as good as he appeared to be. Now, the second question is a bit easier to tackle than the first so let's start with a bit of quantitative analysis there.

As long as his peripherals, Dickey's ERA / FIP / xFIP / tRA / SIERA (2.73 / 3.27 / 3.27 / 3.39 / 3.18) were not far from what we'd likely expect, given that, as a knuckleballer, he's likely to be able to induce fairly weak contact on balls in play (his BABIP over the past three seasons: .276, .278, .275). His strand-rate (80%) does seem a bit high but, given his penchant for the punchout (24.8% k-rate), <a href="http://www.bluebirdbanter.com/2011/9/12/2418213/im-waiting-for-my-man-what-factors-into-a-pitchers-strand-rate" target="new">we'd expect his strand-rate to be somewhere around 75%</a> with a league average BABIP. Add in a healthy dose of hit suppression and we see that sequencing didn't really come into play as a factor here. His HR/fly-rate doesn't suggest a great deal of luck on flyballs either so I'd say Dickey's performance is supported by K- and BB-rates. Now, it's also come up in some circles that his strikeout-rates were a mirage. I've run numbers on this before and, from what I've found, the best predictor of a pitcher's strikeout-rate is his whiff-rate. At over 12%, Dickey's whiff-rate was among baseball's best last season and his strikeout-rate was essentially exactly where you'd expect it to be based on that whiff-rate (see Figure below). Similarly, a pitcher's walk-rate can be estimated as a function of how much he pounds the strike zone, a much weaker but still significant relationship. Again, Dickey's walk-rate (5.8%) is very much in line with his zone-rate (51%; see Figure below). All of this suggests to me that the R.A. Dickey we saw in 2012 wasn't a mirage at all: pretty much everything underlying his performance seems real to me. 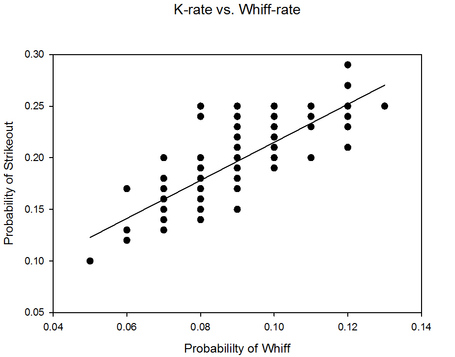 Figure 1: Demonstrates the relationship between strikeout-rate and whiff-rate among all pitchers with 180+ innings in 2012. R.A. Dickey's whiff-rate of 12.2% and K-rate of 24.8% put him right on the regression line. 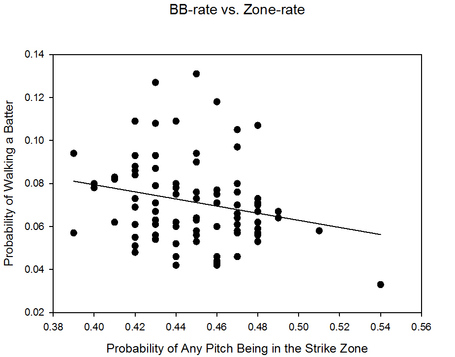 Figure 2: Demonstrates the relationship between walk-rate and zone-rate for all pitchers with 180+ innings in 2012. R.A. Dickey's zone-rate is 51%; note how close he is to the regression line.

Now, that brings us to the first, and more difficult, question of whether or not 2013 Dickey will be up to 2012 Dickey's standards. The most efficient answer is probably no. Given that you always expect exceptionally good or bad performances to regress to the mean, you can't expect Dickey to win another Cy Young Award. But the same could be said for any pitcher who had an exceptional performance in 2013. It's likely that Dickey's 2013 peripherals won't match his 2012 peripherals and we'll some decline. But, as long as I can see, there's no reason to expect Dickey won't continue to be exceptionally effective. While it's true that Dickey made his strides by throwing a pitch that basically no one had ever seen before (the "angry knuckler") and the best hitters on the planet are going to make adjustments, those best hitters on the planet certainly didn't make any last season: R.A. Dickey was just as magnificent in August and September (10 starts, 72 IP, 23.4% k-rate, 6.2% walk-rate) as he'd been during the early-going. Furthermore, Dickey doesn't have to do what he did in 2012 to be valuable -- in both 2010 and 2011 Dickey was more than twice as valuable as any pitcher on the Jays staff in 2012 not named Brandon Morrow -- and more valuable than Morrow's season as well (though only because of missed time). Even if Dickey reverts all the way to previous form, he's still a solid mid-rotation starter, something a team that is trying to compete for their first playoff berth since 1993 can surely use, particularly given the payroll flexibility Dickey's contract affords.

Just a few short weeks ago a lot of folks on the site wanted nothing to do with a package for Dickey centered around Anthony Gose and J.P. Arencibia. It seems like the Mets got more than that so I wouldn't be surprised if a lot of folks don't like this trade. But that doesn't mean that R.A. Dickey isn't one of the best pitchers in the game right now and kind of an awesome guy to boot. Given their recent roster changes, it's certainly possible that the Jays are fairly hamstrung financially and needed to improve without breaking the bank again. Considering the Jays have signed him as if he were 2-win player for the next three seasons, it seems like giving up players is a gamble that might just help them fly another flag or two. How long do flags fly again?