R.A. Dickey's previous time in the American League, from 2001 to 2009, was unsuccessful, at best. Dickey's time with the Mets has transformed him, however, into a different and very successful pitcher. How did he go from fringe bullpen guy to Cy Young winner?

You probably know the story, at least partially. The short version is this: R.A. Dickey was a first-round draft pick by the Rangers in 1996, but he got only a minimal offer after the Rangers' medical staff found out Dickey did not have an ulnar collateral ligament in his right elbow. Dickey's initial results were bad, but he was allowed to continue to pitch, and eventually found his way to the majors. At the big league level Dickey failed to manage an ERA below 5, then tried to adopt a knuckleball at age 30, but with poor results. Four years of irrelevance later, Dickey finally managed a somewhat decent (4.69 ERA) partial season with the Twins while working out of the bullpen. Little did anyone know that Dickey would simply take off the next year with the Mets, starting 26 games while pitching to a 2.84 ERA. His next two years were also very good, with 2012 netting him a Cy Young award for his continued brilliance on the mound.

On the surface, it looks like Dickey saw the light in 2010 and has since then been a steady, productive pitcher. But if you look deeper, you'll find that 2012 brought big changes to the way Dickey pitched. His strikeout numbers rose spectacularly, and his average knuckleball velocity increased even as his fastball's velocity decreased. Dickey's pitches were hit in the air more often and those that did go airborne went for homers more often, but that last part was most likely due to Citi Field's new dimensions. Fellow Bluebird Banter author jessef has already indicated that Dickey's ERA should stay low if he can keep striking out guys like he has in 2012, but will he manage to keep those strikeouts coming? And what made Dickey suddenly turn into a strikeout pitcher in the first place?

As a knuckleballer, Dickey's strength does not lie with the fastball. He does throw one, but not often, and at ~84 mph it's just there to surprise hitters with. That actually works surprisingly well, as hitters are often too surprised to take the bat off their shoulders. But Dickey scaled back the use of his fastball this last season, so it's very unlikely the sudden increase in strikeouts is due to changes in the fastball. If anything, throwing less fastballs might have contributed a bit to the strikeouts, as the fastball rarely gets whiffs. There are two other pitches that Dickey throws, but he uses them very sparingly: the changeup and the 'eephus' knuckleball. The first is a pitch you all know, but which Dickey has little use for since he so rarely throws fastballs. The 'eephus', clearly distinguishable on pitchf/x graphs by its speed, is a much slower offering than Dickey's regular offerings, but it saw even less use last year, so don't expect it to play a big part in Dickey's arsenal.

As for his main offering, Dickey apparently throws not one, but two knuckleballs. Comparison with Tim Wakefield's graphs does indeed reveal that Dickey's knuckleball velocity varies a lot more than that of the former Red Sox pitcher. The linked research from Amazin' Avenue reveals that the faster knuckleball offering gets much better results, with Dickey using the faster knuckler more when he's ahead and the slower one more to start the hitter off with, or when down in the count, although the fastball serves as his true "down in the count" pitch. This research does suggest that there may be some progress to be made here if Dickey can command his faster knuckleball enough to throw it even more often. The increasing velocity on Dickey's knuckleball suggests he's already making progress in that area, though the I wouldn't expect such a big change in whiff-rate to come from just a 1 mph difference. And if he's using more knucklers of the faster variety, shouldn't his groundball-rate have increased, instead of decreasing quite a bit?

The answer to the groundball conundrum might be found with a third type of knuckleball. To explain, we'll turn to a quote (found here) from one of the newest Blue Jays, catcher Mike Nickeas:

"He throws a high, rising knuckleball," Nickeas says. "We need to come up with a name for that one. It looks like it’s going to do all the things the other ones before it did, that’s it’s going to come down. But this one taps down a little, then goes ‘Boom!’ And seems to fire back up. What he throws over and over, it may be called the same pitch because he throws it with his knuckles, but he’s a different beast. He’s a different animal."

Sounds impressive! Is it visible in Pitchf/x? Well, I think it might be: 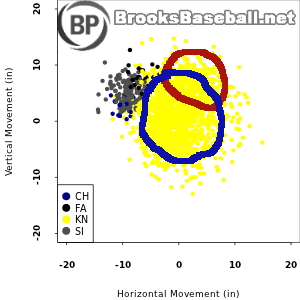 With my unimpressive paint skills, I outlined the normal knuckleball movement blue, with the high knucklers outlined with red. Both Dickey's previous years and Wakefield's graphs show nothing like this, so it is either a product of repeated unusual circumstances or it's an intentionally different pitch. I personally believe it's the latter, and it would help explain both Dickey's decreasing proclivity for groundballs and his rise in strikeouts. For a fun GIF of what this pitch is probably supposed to look like go here.

By throwing a knuckleball as hard as he does, and with the control over it he has, Dickey was already doing something very different from everybody else. By changing speeds on it and possibly even inventing new variations on the pitch, Dickey's even more baffling to hitters than should legally be allowed. All evidence points to Dickey still working on his pitching like he's got to improve to stay on the roster. He does not, he's already very good. But we won't mind if he only gets better as he, strange as it may sound for an 38 year old pitcher, keeps getting more experienced with the knuckleball and the various variations Dickey has and hopefully will come up with. The strikeouts might decrease a bit, especially with the move to the American League with its designated hitters, but all signs point to R.A. Dickey being very fun to watch. And I haven't even touched on his personality yet.