Good Friday morning everyone! For me this is my last workday of the year, although I don't know how much actual work I'll get done, seeing as how most of my colleagues are already gone (either physically or mentally). My to-do list for today is to clear email, clean my desk, go for a lunch meeting, then bake cookies for all the remaining staff in my building. Yes, it's actually part of my job.

To go along with this links post, I present to you my favourite new Christmas song this year: JD McPherson's "Twinkle (Little Christmas Lights)." Listen to it--and if you like it, send it to your pals and buy it on iTunes! Too bad it's only two minutes long but it is two fantastic minutes.

Here are your Friday morning links:

Baseball's five most and five least improved teams - ESPN
ESPN surveyed baseball executives (don't know how many) and they unanimously said that the Blue Jays were the most improved team this offseason.

Your participation needed! Over at Infield Fly, Greg Wisniewski posts the 2006 Backwards Hall of Fame Ballot--go vote out players you feel like shouldn't be going to the Hall of Fame! Greg made a FanPost explaining why he is doing this project.

JaysProspects featured a double feature from Lansingian (Lansingite? Lansingese?) blogger Brian Crawford yesterday: a post on Gustavo Pierre's improvement in 2012 (not mentioned in the article, but after making 44 errors in 2011, he made just 16 official miscues in 2012 after moving from shortstop to third base; also, the Crawford keeps calling him a shortstop so maybe he is moving back?), and another post on Shane Opitz, who the Supreme Court recently ruled that he could stay at shortstop despite Borys "Scrabble On Steroids" Wrzesnewskyj’s protests.

Ian the Blue Jay Hunter chronicles how general manager Alex Anthopoulos built up the Blue Jays' farm before using it to get proven Major League talent.

Shi Davidi and catcher J.P. Arencibia chat over on Sportsnet.ca--when asked about Travis d'Arnaud being traded to the Mets, the Twitter-loving Arencibia said:

OK. He is right, he was probably not traded because of his....somewhat lackluster track record so far:

Moving on, The Southpaw looks at relief prospects in the Blue Jays' system. Hope Alan Farina has better luck in his recovery season than Dustin McGowan.

Talking about relievers, Andrew Stoeten informs us that Sergio Santos believes there is a "100% chance" (error bars not stated) that he will be ready for Opening Day. When talking to people about the 2013 bullpen, I keep forgetting about him.

On Monday, Joanna Humed and Chucked about her feelings towards the R.A. Dickey trade, saying the saddest part about it is the departure of John Buck.

The Blue Jays' 2013 rotation is composed of Mark Buehrle, R.A. Dickey, Josh Johnson, Brandon Morrow, and Ricky Romero, which looks like it could be the American League's best starting five. Magpie from Batter's Box opens the history books and picks out the four seasons where the Jays did have the best rotation in the league.

Over at Meg Rasmus' Instagram page we find this gem (by the way they were in a restaurant called Dick's Last Resort): 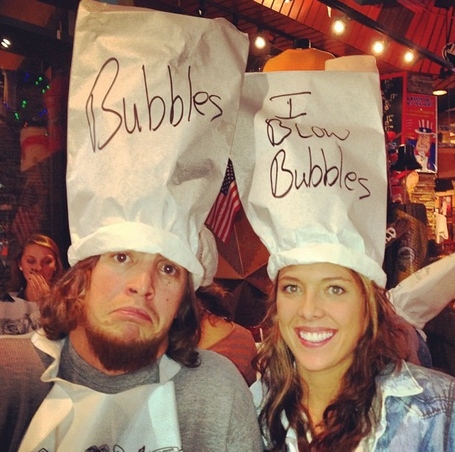 And lookey here... SB Nation's Rob Neyer (I guess I can call him a "colleague"?) will be causing trouble on what Canadians call Boxing Day:

If you wrote something really terrible about baseball in 2012, please do NOT look at @sbnbaseball the day after Christmas. Please.

I wonder what percentage of those came out of Boston (OK the article I linked is not "really terrible" but it's a fun read)! So between stores during Boxing Day shopping point your mobile browser at Baseball Nation and read all about it.