I Got Friends In Nashville, Or At Least They're Folks I Know: Toronto Blue Jays At The Winter Meetings - Day 3

Share All sharing options for: I Got Friends In Nashville, Or At Least They're Folks I Know: Toronto Blue Jays At The Winter Meetings - Day 3

The Winter Meetings have been quite boring so far--there has been a few free agent signings but we are still waiting for that big trade to analyze. It has been almost completely silent on the Blue Jays front, with general manager Alex Anthopoulos saying that he doesn't expect the club would do much in terms of player transactions. But maybe that will change today, maybe something interesting will happen.

After a false alarm yesterday, the National Baseball Hall of Fame is expected to announce the winner of the 2012 Ford C. Frick award some time today. Let's hope the committee chose Tom Cheek, because his elevation into the Hall of Fame is already long overdue.

Perhaps the most interesting news for Blue Jays fans is the late-night report that the Miami Marlins were about to trade shortstop Yunel Escobar to the Tampa Bay Rays for Derek Dietrich. We all remember Escobar, but I had no idea who Derek Dietrich was. Good thing Bluebird Banter reader-commenter Vagabond13 chimed in with this scouting report from Minor League Ball's John Sickels:

And in a more relevant, important point, the South Florida Sun-Sentinel reported that Dietrich spent two years in a circus and juggles for charity (awww). And when he was on the 2011 Midwest League All-Star team, he even juggled bats to entertain the crowd!

What the heck were the Marlins thinking there? Even if they were "panicked" to move him as Jeff Passan tweeted, Escobar is a 2-3 win shortstop who is owed just $5 million next year and has club-friendly $5 million options for 2014 and 2015. Yes, Bob Elliot reported that Escobar carried his attitude issues to South Beach, allegedly demanding that the Marlins play him at shortstop next year after agreeing to playing third, but I would've thought that something more than a C+ prospect would be sent southbound. I am curious to see how Joe Maddon deals with the troubled Cuban. In any case, this was an excellent move by the Rays--even if personalities clash to a point where Escobar needs to be moved, he carries a very, very mobile contract. The Marlins' payroll is now at $38 million.

In that same Bob Elliot article linked above, someone who's at the Winter Meetings predicted that John Gibbons and Brett Lawrie may be "on a collision course." This wasn't a random somebody, but someone who knows Gibbons well, and Lawrie better. But of course, most of us here predicted that there would probably be some tension between those two ever since Gibby was hired. Let's see what happens--I have a feeling that winning will prevent any big clashes from taking place. Andrew Stoeten takes a look at the article over at Drunk Jays Fans.

Stoeten also quotes David O'Brien, who tweeted that the Atlanta Braves may be interested in Emilio Bonifacio--maybe that's who Anthopoulos spent several minutes talking about during these meetings.

In other Blue Jays news, according to Mike Wilner, they have hired Mike Barnett as their minor league hitting coordinator. You may recognize that name: Barnett was the Blue Jays' hitting coach from 2002 to 2005. He also reports that the Blue Jays have offered organizational jobs to former pitching coach Bruce Walton and former bench coach Don Wakamatsu if they don't find other employment. 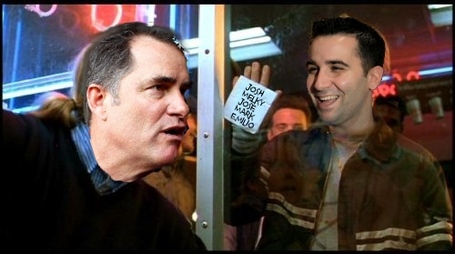 Wilner also spoke with former manager John Farrell during his media availability today, as he detailed in that linked article. Another baseball writer with a monosyllabic first name, SB Nation's very own Cee Angi (great Twitter follow, by the way), wrote about what Farrell had to say to a mixed scrum of Toronto and Boston media. President Farrell said the right things, saying that Toronto is a "great city" with "good fans," yadiyadiyada, apologizing to any fan who got irked by what he said in that inauguration ceremony in Boston. I know that many Jays fans are still angry at his leaving--and that's OK--but I have just lost much of my interest in stories about him. But I must highlight several sentences from Wilner's piece that were golden:

"[...] the assemblage around Farrell has been equal parts Toronto and Boston media, with the Sox’ scribes often co-opting the scrum for their own (sinister? I didn’t say that, you did) purposes"

"[...] I was astonished to see some dismissive snickering from members of the Boston media as we Toronto types asked Farrell a few questions about his departure from the Blue Jays and the happenings on our side of the border since. It was a stunning display of a complete and utter lack of self-awareness[...]"

"Farrell was not asked whether he likes apples at any point during his media session [...]"

In that second quote, I think Wilner accidentally typed "astonished" when he meant to type "not surprised at all". I welcome not-so-subtle jabs at Boston media any day of the week, but I think I'm done with being bitter over Farrell. I'm going to move on, and I hope we stop hearing so much about him here in the great white north.

Greinke market down to 1. Dodgers 2. Angels 3. Rangers in that order with possibility of mystery team Tor?Cws?Bos?.Nats out..Braves unlikely

Aren't we excited? It is rumoured that Toronto may be one of the mystery teams that may possibly be part of a group of teams who are likely in the market for Greinke.

That's about all the time I have to recap, sorry I didn't get a chance to get into stuff happening around the league.

If you are in the Toronto area and are free this Thursday night, then you should consider checking out this event at Tall Boys Bar. They will be screening the entire September 2, 1990 game between the Toronto Blue Jays and the Cleveland Indians where ace Dave Stieb threw the Jays' first (and only) no-hitter. There'll also be Blue Jays trivia, and I would imagine, beer. I'll be there too, just in case you'd like to buy me a drink.

Just show up before 7:30 pm at 838 Bloor Street West, just west of Ossington. It's right on the subway line near Christie Pits. If you are heading down for food as well, I'd recommend you to check out something in Koreatown just east of Bloor and Christie.