Sixteen, Clumsy, and Shy: How Weird Are Knuckleballers' Arsenals?

Share All sharing options for: Sixteen, Clumsy, and Shy: How Weird Are Knuckleballers' Arsenals?

Ever wonder just how different the arsenals of knuckleballers are, relative to the rest of pitchers? Well, we already discussed how pitcher arsenals are analogous to ecological communities and how some of the statistical techniques community ecologists use can be transferred to describing and testing relationships for pitchers. Operating under that assumption, I used a technique called Nonmetric Multidimensional Scaling (NMDS) to graphically display pitcher arsenals.

I downloaded the pitch type usage of all pitchers last season who threw 150 innings or more and used a multivariate method called nonmetric multidimensional scaling to graphically display how pitch usage differs from one pitcher to another. The first step is to create a matrix of how different each pitcher's arsenal is from every other pitcher (called dissimilarity scores and based on the Bray-Curtis index of community dissimilarity). Once this matrix has been created, the technique compares each of those scores to one another and assigns each pitcher's arsenal a set of (x,y) coordinates in two-dimensional space. All that remains is to plot those coordinates and we see similarities and differences between pitcher arsenals. Now, the axes do not actually mean anything. Although we can test variables to see how they correspond to this ordination, all the figure below shows is how pitcher arsenals differ in relation to one another. 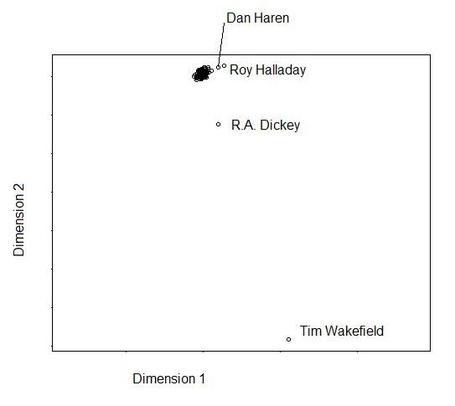 I think the results speak for themselves but I'll just quickly say that Dan Haren and Roy Halladay are separated due to cutter usage. R.A. Dickey, while still quite far removed from the rest of the pack is nowhere near as far away as Tim Wakefield because he uses his fastball more (22% of the time vs. 9% of the time) and his knuckleball less (75% vs. 89%).

Anyway, this doesn't really mean anything, I just thought you might find it interesting.

Thanks to The Smiths for today's title.