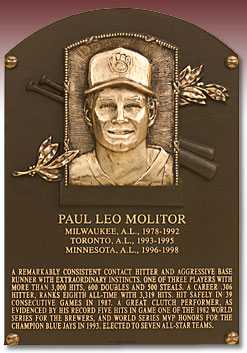 Paul Molitor was born August 22, 1956 in St. Paul, Minnesota (he shares a birthday with Carl Yastrzemski and my wife). He was drafted in the 1st round of the 1977 amateur draft, the 3rd pick overall (Harold Baines and Bill Gullickson were drafted before him) out of the University of Minnesota. The Jay's first pick that year, Tom Goffena. You can't win them all, though we drafted at the bottom of the first round, MLB's way of sticking it to the Expansion teams.

After only 64 games of A ball Paul started the 1978 season with the Brewers. He finished 2nd in the Rookie of the Year voting to Lou Whitaker. He played 15 years for the Brewers making the All-Star team 5 times and receiving MVP votes in 6 different seasons finishing 5th in the voting in 1987. Milwaukee's ‘Harvey Wall Bangers' made the playoffs in 1981 and made it to the World Series in 1982 losing out to the Cardinals. Bill James called the Brewers infield of Cecil Cooper, Jim Gantner, Robin Yount and Molitor the best infield in the majors in the 1980's and the 5th best infield of all-time.

He was moved around the infield and even played CF one season for the Brewers as they didn't seem to realize he was the sort of player for which you moved the other guys around . Paul was kind of injury prone in his time there.

In 1993 the Jays signed him as a free agent, to replace Dave Winfield who went the Twins as a free agent, at DH. I remember the anchor on Sports Desk, at the time of the trade, saying the Jays finally had a leadoff man, but Cito still used Devon White in the leadoff spot. Molitor came thru with one of the best seasons of his career batting .332/.402/.509, finishing 2nd in the league with 121 runs and driving in 111. He also led the lead in plate appearances (725), hits (211), batting average in late innings of close game (.411) and with runners in scoring position (.384). Wouldn't you love to have a player like that on the Jays now? At 36 he set some sort of record for being the oldest player to drive in 100 runs for the first time. He also hit 22 homers and stole 22 bases. He finished 2nd to Frank Thomas in the MVP vote. Fangraphs credits him with a 5.2 WAR that year, his best number with the Jays.

Molitor was terrific in the playoffs hitting .391 in the ALCS win over the White Sox scoring 7 runs and driving in 5 with 1 homer. In the Series he hit .500 with 2 homers, 2 triples and 2 doubles in our win over the Phillies, scoring 10 runs and driving in another 8 to win the Series MVP and he was on base for Joe Carter's series winning home run. The enduring memory, for me, is him hugging Cito and crying after they won. In a long, terrific career this was his first and only World Series win.

Rob Neyer picked Molitor as the Jays best DH ever and we did too in our Best DH poll. Bill James called Molitor 3rd greatest leadoff man of all-time behind Rickey Henderson and Tim Raines as well as the 8th best third baseman of all-time. One strange thing about his career is that the first 10 years he was very injury prone and the second half of his career he played almost every day.

After the season he signed with the Twins as a free agent to finish his career playing for his home town team. Paul had a terrific career ending up with 3319 hits, 504 stolen bases and a Hall of Fame Plaque. Since retiring he has worked as a bench coach for the Twins and hitting coach for the Mariners. I used to think he'd become a manager one day, but he hasn't yet. After retirement he talked about a drug problem early in his career and talks to children about drugs. The drug problem likely had something to do with all the injuries early in his career. He's married and he and his wife do work for Camp Heartland that works with children with HIV.