That's All You Can Do About Some Things: Do Teams with Better Bullpens Outperform Their Win Expectancies?

Share All sharing options for: That's All You Can Do About Some Things: Do Teams with Better Bullpens Outperform Their Win Expectancies?

Much ink has been spilled discussing Pythagorean win expectation (calculating a team's expected win-loss record based on the total numbers of runs they scored and allowed, instead of looking at specific game results). It has been hypothesized (and seems to make sense) that improving a team's bullpen could improve their record more than one might expect based on those pitcher's individual WAR totals because bullpen arms can pitch in innings likely to have a larger impact on games. I figured that it might be interesting to see if having a better quality bullpen would allow a team to outperform its expected win total. I estimated Pythagorean wins as RS**1.83 / (RS**1.83 + RA**1.83) and used a sample of all team*seasons between 2009 and 2011 (a total of 90 team*seasons). For quality of bullpen innings, I divided each team's Fangraphs bullpen runs above replacement by the team's relief innings pitched.

I anticipated one problem with my method. It is often said that teams that rely less heavily on their bullpens are able to get better quality innings. This makes sense: the fewer innings you need, the more of those innings you should be relying on your better arms. Bizarrely, however, a simple test for correlation between relief innings and relief pitcher runs above replacement per inning does not reveal this trend (p = 0.27; see figure after jump). 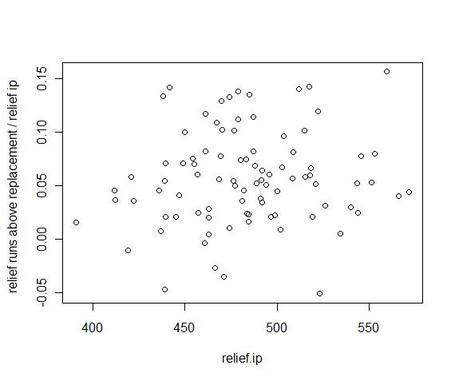 Contrary to what I expected, quantity of relief innings do not seem to be negatively correlated with quality of relief innings. I suppose this what could be driving this unexpected lack of a trend is that managers tend to rely on better bullpens more. It also seems like a possible factor is that worse teams pitch the ninth inning less frequently (since they're more likely to be behind going into the bottom of the ninth on the road), leading to fewer bullpen innings for worse teams.

Thanks to Modest Mouse's "Polar Opposites" for today's title.