Make No Mistake, They Hate You: Why It's Worse When Better Players Juice

Share All sharing options for: Make No Mistake, They Hate You: Why It's Worse When Better Players Juice

With Tom's recent post asking which former Jay folks would like on their team, the issue of, possibly the most polarizing (nah, that's not the right word, polarizing people can be liked) player the Jays ever had came up quite a bit. I will not say his name because then I'd be tempted to use foul language (which, according to our bylaws here, would be allowed, which, in turn, is why it would be so tempting).

Anyway, this comes up a lot when we discuss players who took advantage of some of the wonders of 20th century biochemical advancements, but I figured it was worth discussing -- if only to see what you all think about it. It's been posited that, because most players had access (and many also took advantage) of the aforementioned external subsidies to performance, it does not make sense to discredit the more exceptional players who did.

However, I think it behooves us to remember how baseball talent is distributed. Now, of course, as one gets to the upper levels, "baseball talent" refers to specialized talents, but I'm pretty sure you all get the idea.

How much talent each level of play requires:

How talent is distributed: 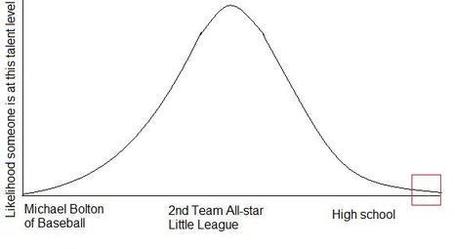 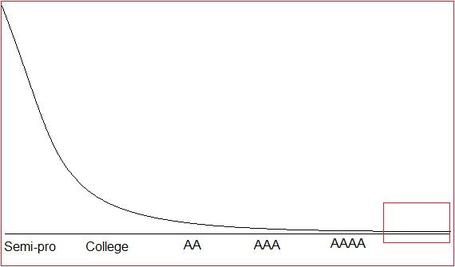 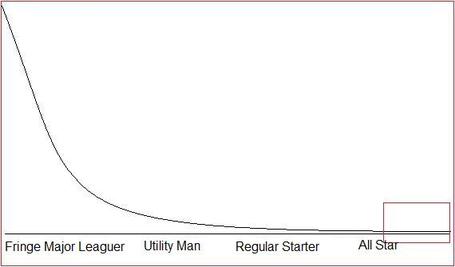 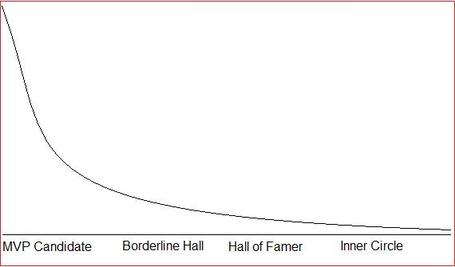 Now, the point of all this is to illustrate just how good players in the MLB are. Even Jeff Mathis, he of the .194 / .257 / .301 lifetime line (his career OPS was 50 points lower than Jose Bautista's 2011 slugging average), is so far at the tail-end of the distribution that he is likely one of the top 1500 or so players in the world. Considering that there are probably 50 million or so people who play baseball*, the ratio of players worse than Mathis to players better than Mathis is about 33,332 to 1.

And that's why the fact that he-who-shall-remain-nameless was chemically enhanced elicits such disgust. We're talking about someone who was already at that Mike Piazza level, maybe even above that level. When guys like that cheat, it makes huge differences. Jason Grimsley, probably a fringe major leaguer, parlayed juicing into a respectable major league career. Jay Bell and Bret Boone, solid starters already, became All-Stars. Rafael Palmeiro, a perennial All-Star already, turned a Will Clark-like career into an Eddie Murray-like one and Sammy Sosa and Mark McGwire turned 40 HR power in their 20's into 60 HR power in their 30's. But what a bona fide Hall of Famer could do on steroids still boggles the mind. From ages 36 to 40, Barry Bonds posted the four best offensive seasons of his career, with wRC+ between 2001 through 2004: 236, 245, 214, and 234. Roger Clemens, at 34, suddenly went from being a Hall of Famer who'd seemingly entered the twilight of his career to his two seasons with the Jays, during which he posted the best strikeout-rates of his career (against the lowest BABIPs). He went on to win another two Cy Young Awards after leaving the Jays.

Now, regardless of my personal opinion, I'm not trying to say that it is necessarily any morally worse for the best players to cheat. This is a statistical argument, not an ethical one. All I'm saying is that we should never underestimate what can happen when you make changes at the tail end of a distribution.

Thanks to Ted Leo and the Pharmacists for today's post title.

*I am making this number up out of thin air.