Masterson's role changed once again after he was traded to Cleveland for Victor Martinez. Masterson struggled a bit for Cleveland though, giving up too many walks and pitching to a 4.55 ERA (4.36 xFIP). His performance in 2010 will have had many people doubting whether he would've been better off in the bullpen, as his 4.70 ERA in a good year for pitchers was very disappointing. A 3.87 xFIP and an impressive 59.9% groundball-rate inspired some hope for the future, and in 2011 Masterson had a breakout season with a 3.21 ERA, a career low walk-rate and a 3.64 xFIP.

Justin Masterson's best quality as a pitcher is getting groundballs, averaging 56.1% over his career so far, which is very good. His control often led him down, though he finally cut his walk rate to a decent amount in 2011. He can also get strikeouts quite competently, so Masterson has become a complete pitcher and a good "number three" starter for most rotations. One problem he has, however, is facing lefties. Masterson has a 3.16 FIP versus right-handed batters, but against lefties it's just 4.46, with a bad BABIP to boot. The pressure is mostly on the left-handers, then, to get the run production going against Masterson.

The first thing to note is that Masterson throws from a low arm slot that few starters use because it seems to reduce their effectiveness greatly against opposite-handed batters. We've already seen that this is the case for Masterson, but it does allow him to dominate right-handed batters. The weapons Masterson has at his disposal are a four-seamer, a sinker and a slider. What we call Masterson's four-seamer actually moves more like a normal pitcher's two-seamer, whereas his sinker probably has the most impressive sink of any starting pitcher currently in the MLB. Both of those pitches also have quite a lot of running action (in on righties), not special for sinkers, but extraordinary for the four-seamer. Masterson's third pitch, the slider, also has plenty of downward movement, as well as cutting action. At 82.8 mph over his career, Masterson's slider is a pretty slow slider, possibly better called a slurve than a slider. His fastballs came in at 92.7 mph on average in 2011, so Masterson is not a soft-thrower in the slightest.

Over his career Masterson has steadily increased the percentage of fastballs he throws, from 66.7% in 2008, to 84.4% in 2011. Of course, this means the use of his slider, and a now completely discarded changeup, has been toned down, from 30% in 2008 to just 14.4% in 2011. Both the slider and the sinker are thrown less versus lefties, which means the four-seamer is used more against them (~15% more versus lefties). Masterson prefers to use his slider in strikeouts situations (30%+) rather than in hitters' counts, but interestingly doesn't use it much as the first pitch of an at bat (15%, compared to 25% in 1-1 counts) or in full counts, at just 8%.

Masterson tries to locate his slider down and away to righties, while he will throw it anywhere down in the zone to lefties. His four-seam fastball is clearly intended more for the top of the strikezone than the sinker is, as seen in the heat maps from Fangraphs: 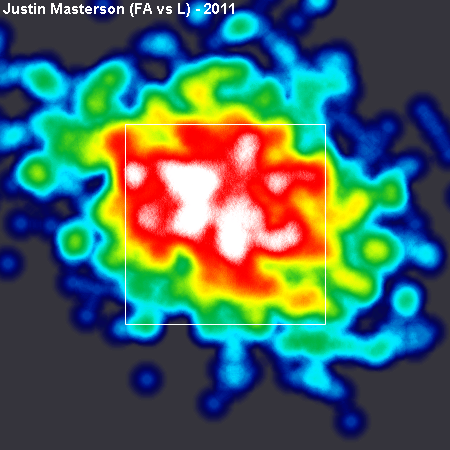 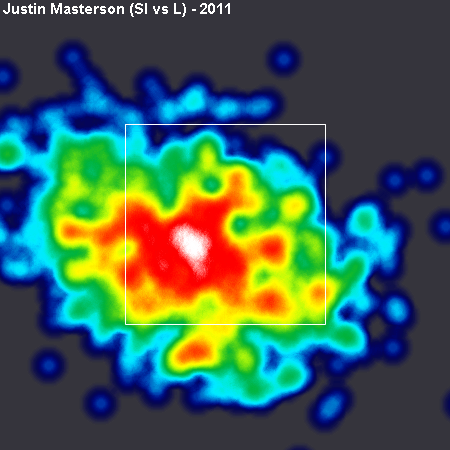 Although Masterson throws a lot more four-seamers to lefties, the pitch doesn't actually perform that well against lefties. Lefties have a lot easier time making contact with the offering than righties do, although the same is true for both the sinker and the slider. All three pitches do get some groundballs against lefties, which limits the damage from all the extra balls he lets them hit into play. The sinker's groundball-rate is very good at 60-70%, while the other two are decent to above-average in that department. Overall, Masterson's sinker is thrown for strikes decently, and it misses bats at a quite good rate for a sinker. His four-seamer has been average at getting strikes and missing bats. Masterson's slider is the pitch that really stands out as a weapon, with the ability of getting both called strikes (confirming its status as a "slurve") and swinging strikes. It is thrown for a ball somewhat often, but the slider makes up for it because it's so hard to put into play.

Well, that's it, I hope you enjoyed the scouting report and please tell me what you think.