Ident-A-Head: Who Are These Well Groomed Blue Jays?

Share All sharing options for: Ident-A-Head: Who Are These Well Groomed Blue Jays?

It is well known that all 25 Toronto Blue Jays currently on the roster have a head, and on most of their heads are some hairs. Now, most of these hairs are often covered by either a baseball cap or a baseball helmet. But on the rare occasion, like during the national anthems, when a player runs really fast, or when a player disagrees with a called strike, their headgears come off to expose said hairs.

Sadly, no one on the 2012 Toronto Blue Jays has a notable hairstyle so the thrill of seeing full cranial nudity is not as high as with some other clubs. But it doesn't mean our local players aren't well groomed.

I recently bumped into Blue Jays twitterer (and budding photographer!) @james_in_to (give him a follow!) at the Rogers Centre. You see, he has some sweet seats, and earlier this season he posted some pictures of the back of players' heads, asking fans to try to identify them. Seeing that, I thought it would be cool if he could take some new pictures so we could play the game at Bluebird Banter, and it's a great fit for Adidas' "Top Grooming Moments" campaign to boot. Thank you, James, for saying "yes" and snapping these pics!

How many of the following 9 Blue Jays can you identify just by their very well-groomed hairstyles? The first to get all 9 correct in the comments gets a prize of 10,000 Internet Points. 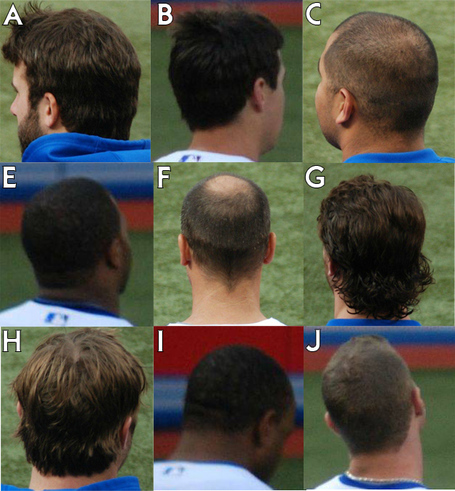 EDIT: Yes I realize there is no letter "D"

Just remember: you may not be in the big leagues, but you can still rock a big league head. Adidas is here to help with their new line of grooming products for men. Just click on the sides or the top banner to see what they have to offer. I wrote like 4 jokes but had to delete them so Adidas won't get angry at us. Also: please send me free stuff.