Looking at this season, the biggest 'overachiever' based on E-F in baseball are the Toronto Blue Jays with an E-F of -1.00. The biggest 'underachiever' based on E-F are the Milwaukee Brewers with an E-F of 1.07. The Jays also sport the highest DRS in baseball with 45 DRS, and the Brewers have the 6th lowest DRS in all of baseball at -19. With regards to UZR, the Jays are 19th in baseball (-2.2 UZR) and the Brewers are 23rd in baseball (-6.5 UZR). So, it is obvious that team defense plays a role in a team over- or underperforming its FIP, but how much of an effect does it have?

Anyway, I took the numbers from all team seasons between 2003 and 2011, which resulted in a sample size of 270. When I ran the regressions individually, these were the adjusted R^2 values when each predictor variable was regressed with E-F:

Those are pretty large. In fact, this verifies that, if one assumes that team defense can lead to one team's pitching to over- or underperform their FIP, DRS is a slightly superior defensive metric to UZR or UZR/150. However, UZR (or UZR/150) is still useful on its own. These results also quantify the effect that team defense has on one team's pitching over- or underperforming its FIP, all of which are quite significant.

A grain of salt should be applied to assessing defensive metrics this early in the season, as they usually do require a large sample size (especially UZR). Nevertheless, if one looks at DRS alone, then this is quite an encouraging start for the Jays and I don't think it's crazy for one to expect this team's pitching to continue outperforming their FIP if the defense continues to be this good (especially with the number of GB pitchers on the team). Now, I don't expect it to continue around -1.00 (the lowest since 2003 was the 2010 Athletics and 2003 Mariners at -0.62), but I don't think it's far off-line to expect them to continue outperforming their FIP relative to the rest of the league as the season continues if the defense continues to be good. If you look at both DRS and UZR, then that paints a slightly different picture.

Here is the E-F leaderboard.

After doing the multiple regression analysis, as explained previously, these were the equations I got:

Finally, for those that are interested, this was the scatter plot I got between DRS and E-F in team seasons between 2003-2011 (glovetap to MjwW for the tips on improving the look of the plot): 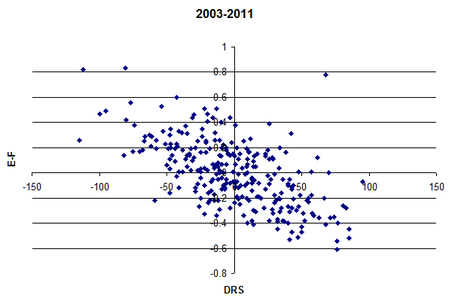 Another thing I should add:

As some of you know, I deleted a similar post to this yesterday because I felt that the conclusion was pretty obvious. However, I began to realize that the results I found not only quantified the effect of team defense on a team over- or underperforming its FIP (other posters saw the same thing), but it also (to a certain extent) verified the most popular defensive metrics in UZR and DRS as well as DIPS. In addition, as stated by some posters, it showed a good comparison between DRS and UZR. So, here is a slightly modified version of the post I made yesterday.