The Toronto Blue Jays came into the game looking for a road sweep at U.S. Cellular Field, but unfortunately came out two runs short of the win, and one win short of the sweep.

Rajai Davis was penciled in to play left field but was a late scratch due to a problem with jammed fingers and was replaced by Mike McCoy in the starting lineup just before the game.

The game started with a bit of a delay, as some of the lights in the Cell failed to turn on properly. I was happy to see that manager John Farrell waited until Chicago White Sox starter Jake Peavy completed his warm-up pitches before complaining to the umpires about the lights. It was a bit of strategy to try to disrupt the pitcher's rhythm that did not end up working as the Jays went down quietly in the first inning, but it was a nifty thing to try.

Chicago scored first on a sharp single by Alex Rios that was deflected by Brett Lawrie into left field. Lawrie made a mistake at judging the ball and the play was initially ruled an E-5, but it was subsequently changed to a hit, probably because of home field advantage.

The offense quickly answered, though. In the top of the second inning, David Cooper, Yunel Escobar, and J.P. Arencibia loaded the bases and McCoy singled to left on a deflected ball by Chicago third baseman Orlando Hudson, scoring Cooper and Escobar. Next up was leadoff hitter Brett Lawrie, who hit a ground ball that shortstop Alexei Ramirez threw off the mark to second baseman Gordon Beckham. An aggressive slide by McCoy slowed Beckham's attempt to retrieve the wayward ball and allowed Arencibia to score all the way from second.

The 3-1 score persisted until the bottom of the sixth when former Blue Jay Alex Rios cranked a two-run homer against Henderson Alvarez to knot the game at 3-3. The ball barely left the yard, and it seemed like a taller left fielder with a better timed jump would have brought it back. Mike McCoy did not finish the game in left, he was replaced by pinch hitter Yan Gomes, who then went to play left field for the first time in his professional career. There were a few foul balls hit to his direction, but I don't believe he had any fielding chances.

Unfortunately for Alvarez, Jays batters were a horrid 1-for-11 with men in scoring position and left 10 runners on base. White Sox pitchers were trying to help the Jays' cause, giving up 7 hits, 5 walks, and 1 hit-by-pitch, but the Jays just managed to score the three runs.

Going into the bottom of the ninth inning, John Farrell had both Francisco Cordero and Casey Janssen warmed up, but he chose to call on Cordero instead of his closer because the game remained tied. I think Farrell made a mistake with that decision, but it is easy to say that with hindsight.

In any case, this was one of Coco's meltdown games, but it was not entirely his fault. With one out, Dayan Viciedo singled and a wild pitch brought him to second. It was not a good pitch, but it was something that Arencibia should have gotten down and blocked. Ramirez then hit a sac fly to shallow center, but a poor throw by Colby Rasmus resulted in Vicideo's safe arrival at third base. Former Blue Jay, and recent releasee Orlando Hudson then stepped up and hit the winning walk off single. And that was that.

Henderson Alvarez was his typical self this game, going 7 innings with 2 strike outs and giving up another homer. A heated discussion between him and Arencibia in the dugout was spotted by the cameras after the Rios homer, but Omar Vizquel stepped in to mediate.

So overall it was not a very well played game by either team, but the White Sox were better at scoring their runners. All four White Sox runs in this game were credited to former Blue Jays: Alex Rios (who finished with a +.253 WPA) and Orlando Hudson (+.357 WPA).

Suckage Jays include Colby Rasmus (who went 1-for-5, -.157 WPA), Omar Vizquel (who struck out twice with runners in scoring position, -.256 WPA), and of course, Francisco Cordero gets the big number (-.370 WPA). I wouldn't have given Omar the suckage for a fine defensive play he made, but those were two big strikeouts he had.

Graph of Francisco Cordero's Win Probability Added: Talk about being up-and-down... The blue line is Cordero's WPA for each game he has pitched. All points higher than the green line qualifies as a "shutdown" appearance, and all points lower than the red line qualifies as a "meltdown" appearance. So he has had 6 shutdowns versus 4 meltdowns, but I still think he should only be used in low-leverage situations. 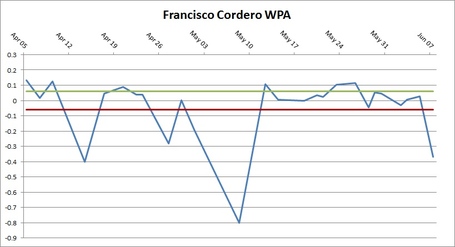 Tomorrow night, the Blue Jays will be in Atlanta facing the Braves in more Interleague action. The game begins at 7:35 with Kyle Drabek facing Brandon Beachy. Drabek will be stepping up to the plate for the first time in the Majors tomorrow night, although he has had a handful of at bats in AA for the Reading Phillies, hitting .263/.263/.263 over 19 plate appearances, collecting 2 RBI.