After taking two weeks off due to personal travels, the Monday Morning Media Mashup is back! Happy holiday Monday to everyone who has the day off and to our fellow Americans, who will soon celebrate their own national holiday. The Toronto Blue Jays ended June with a 13-14 record, missing John Farrell goal of winning 15 games a month by two. It was a month to forget, not only for the sub-.500 record, but for the loss of three starting pitchers in a span of four games. It was also a month to remember, for the monster month Jose Bautista had, as well as the two great Bluebird Banter meetups in Toronto and Calgary.

July started off a little shaky for the Blue Jays, losing despite a strong performances by replacement starter Aaron Laffey, J.P. Arencibia, and Colby Rasmus. Today the 40-39 Jays welcome the 35-42 Kansas City Royals at the Rogers Centre to begin the last home series before the All-Star break. The Royals will be in town for four evening games and then the Blue Jays fly to Chicago to face the White Sox. Right now, as it stands, Jose Bautista will be the only Blue Jay to fly to Kansas City for the 83rd All-Star Game. We will be without Blue Jays baseball until Friday the 13th, when the Cleveland Indians come to town for three.

If you have nothing better to do than to read through baseball articles this holiday Monday, then these links would help you fill your time!

Numbers game: Toronto Blue Jays finding ways to win … and lose - National Post
Guy Spurrier uses the Win Probability Added (WPA) statistic to give credit and blame for each turn of the rotation this season. He explains the statistic very well, so even those new to sabermetrics would feel comfortable reading this. If you don't know what WPA is, I suggest you browse Spurrier's article, because I talk about it below.

Blue Jays all-star Jose Bautista goes to bat for teammate Edwin Encarnacion - Toronto Star
Edwin, you are an All-Star in my eyes.... And I think he has a chance of going to Kansas City--mysterious "injuries" often crop up around All-Star Game time.

Darren Oliver: Worth Every Penny - Jays Journal
Jered Macdonald writes about an underrated member of the Blue Jays bullpen. Unfortunately, one rarely hears about non-closing relievers unless they are pitching badly.

A little Baseball 101 - Sportsnet 590 The Fan
Mike Wilner explains what a blown save is, and how a pitcher can theoretically get a blown save in the 1st inning.

Why all the hate on Jays' Cordero? - Sportsnet 590 The Fan
Wilner has been one of the biggest defenders of Francisco Cordero all season. I know that he hasn't been as horrible as everyone in the stadium thought he was today, but arguments like "let's not forget that right now there's no one on an active major-league roster who has saved more games than he has" really carry no weight. I was one of the few in the stadium who didn't join in to boo Coco off the field, but I can understand why fans are angry--when Cordero is bad, he isn't a kinda bad, he blows up real good (as I wrote yesterday). Here is the updated WPA chart on Cordero (his WPA per appearance is the blue line, the threshold for a shutdown and meltdown is in green and red, respectively): 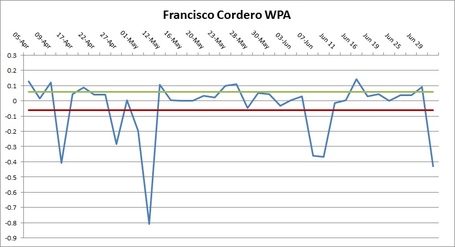 Down On The Farm and Around The League links after the jump! They're worth a read, really!

Down On The Farm

Change-Up: Matt Johnson goes from hard-hitting shortstop to pitcher overnight - Vancouver Canadians News
Matt Johnson was a 24-year old, light-hitting shortstop (despite what the what the article title claims) for the Vancouver Canadians this year, repeating short-season A for a third time. He is not a prospect, so most people probably have never heard of him before. But something special happened to him during a 13-0 thrashing of the Canadians by the Everett Aquasox last Monday: he was sent out to pitch the 9th and struck out two Aquasox that inning, zipping fastballs at 94 and 95 mph. Now he is being converted into a pitcher--that blowout may have just saved his career.

51s' Hechavarria, Beck Triple-A All-Stars; Brown to manage PCL - ReviewJournal.com
It was reported last week that three Las Vegas 51s will be representing the Pacific Coast League in the AAA All-Star Game that will pit the best of the PCL with the best of the International League. It'll be held on July 11 in Buffalo...anyone wanna roadtrip there?

Houston, You've Got a Realignment Problem. - Royals Review
ThunderStreetWorkshop of Royals Review proposes three new realignment options that focuses on minimization of travel distance. He seems to have had a bunch of other great posts too (see his SB Nation profile).

MLB’s blackout problem keeps sport in dark ages - Yahoo! Sports
Jeff Passan reports the efforts of Fernanda Garber, Marc Lerner, Derek Rasmussen and Robert Silver, four baseball fans, to sue Major League Baseball for being in the violation of the Sherman Act in order to get rid of their ridiculous blackout rules.

The unremarkably remarkable career of DeWayne Wise - High Heat Stats
Andy has a short piece on DeWayne Wise over at High Heat Stats. Other interesting facts about the three-time Blue Jay: 1) he was a Rule 5 draft choice by the Blue Jays from the Cincinnati Reds, 2) he only played in even-numbered years from 2000 to 2006. If it were not for 5 games in 2007, he would've continued that pattern until 2008, 3) in 2011, after spending the previous year with the Blue Jays, he signed as a free agent with the Marlins in January, who then released him in March. He then signed with the Jays in April, and then was released in June. Later in June he signed with the Marlins again, before the Jays grabbed him on waivers in August. And he's just 34 years old, he could still have 2 or 3 more tours of service in Toronto.

RBI Hit Of The Year - Baseball Nation
Grant Brisbee shares this incredible RBI single by the Minnesota Twins' Brian Dozier. Physics! (Thanks for sharing this on a FanShot, Damaso's Burnt Shirt)

Tampa Bay Rays Throwback to "1979″ Tonight, Pics! - SportsLogos.Net
Chris Creamer shares screenshots of the Tampa Bay Rays' fictional 1979 throwback uniforms. This was a great idea and they came out with a pretty good design I thought, although I think it was sort of a ripoff of the San Diego Padres' 1978 set. Although I may be tempted to buy the cap (but of course never wear it to Jays games).