Guest Post From The Blue Jay Hunter: Who Would Have Won Game 7 of the 1993 World Series?

Share All sharing options for: Guest Post From The Blue Jay Hunter: Who Would Have Won Game 7 of the 1993 World Series?

When I was in Toronto I met up with Ian from The Blue Jay Hunter and, being a fan, I asked if he would do a guest post for us and he said yes. He came up with a very cool idea. I've often thought about what Game 7 of the 1993 World Series would have been like and even got to ask Pat Hentgen about it. Thanks for doing this Ian, I really enjoyed reading it.

It's the bottom of the ninth, the run that would win the World Series is on first base, and you just stepped into the batter's box. With one swing of the bat, you can clinch the World Series for the Blue Jays.

As kids, most of us have dreamed about this scenario on the schoolyard ball field, but on October 20th 1993 ... Joe Carter lived it.

By now, we all know the story - Joe Carter hit a three run home run to help the Blue Jays secure their second consecutive World Series. But what if he didn't connect on that 2-2 pitch from Mitch Williams and send it over the fence?

People often forget the Phillies were just two outs away from sending the World Series to a seventh game. Frankly, Joe Carter had no business swinging at the 2-1 pitch from Mitch Williams in the dirt, so it's almost a stroke of luck that Williams left the very next pitch up in Carter's wheelhouse.

As revisionist as it may sound, I've always wondered "what could have been" when it came to that fateful at bat. I suppose that's what makes Back to the Future one of my favourite movies, because I've always been fascinated with the concept of going back in time and rewriting history.

So that begs the question ... what would've happened had the 1993 World Series gone to seven games? After all, just four more strikes by Mitch Williams and a Game 7 between the Phillies and Blue Jays would have been a reality.

Thanks to baseball simulators like Out of the Park Baseball 13, we can hop in the Delorean, fire up the time circuits and travel back to 1993 and change what happened.

OOTP is the preeminent baseball simulator out there, so I thought there was no better program to use for a potential Game 7 matchup between the Phillies and the Blue Jays.

The first thought I had when setting up the simulation for a Game 7 was "who would start the games?". After the 15-14 debacle that was Game 4, I think it's safe to say Cito Gaston wouldn't hand the ball to Todd Stottlemyre, and Jim Fregosi would not call upon Tommy Greene.

That would leave only the starters from Game 3, who were Pat Hentgen and Danny Jackson. Both starters would be on plenty of rest, so one has to think Hentgen and Jackson would go to the hill in a seventh and deciding game of the 1993 World Series. 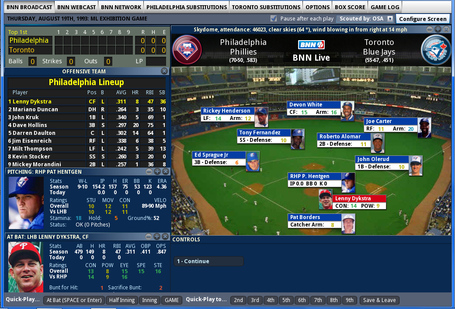 As far as the starting lineups are concerned, I think they would remain relatively unchanged from Game 6, so I kept both lineups the exact same for Game 7. 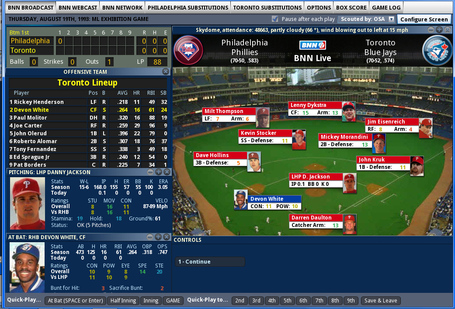 And so, I took to Out of the Park Baseball and put the fate of the 1993 World Series into the hands of the Baseball Gods, and here's what they decided:

The Blue Jays won! Toronto took the game 4-2 over the Phillies on the back of an incredible performance by Pat Hentgen; 8 innings pitched, 12 strikeouts, and just 1 earned run. 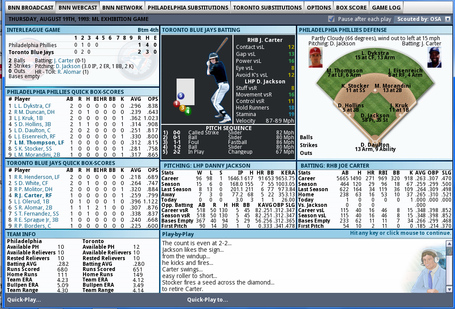 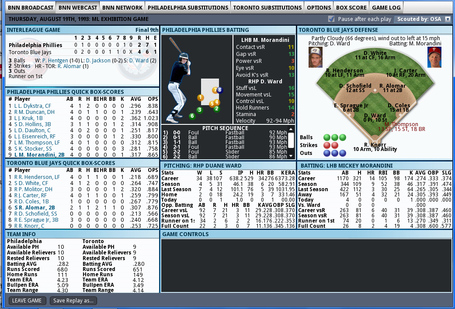 Had that game actually happened, it would've ranked up there with clutch Game 7 performances like Jack Morris' 10 inning shutout in Game 7 of the 1991 World Series.

The offense from the Blue Jays would come in the way from a 2-run home run courtesy of Roberto Alomar, and Devon White tripled and would later score on a single up the middle by Joe Carter. Ricky Henderson added an insurance run with an RBI double in the bottom of the 7th.

This particular simulation of the game had the Blue Jays victorious over the Phillies, but the beauty of simulation baseball is anything can happen. You can run the simulation the exact same way a number of times and get a myriad of results.

This 4-2 game just so happened to be the first game I simulated (after I finally had all the settings, lineups and pitchers set correctly). I could have easily gone through OOTP and ran it again and it might have been completely different. Maybe even crowning the Philadelphia Phillies as 1993 World Champs.

All it takes is one pinch hit, one botched ground ball, or one swing of the bat to change history forever.

Thanks to Joe Carter's home run, Blue Jays fans don't have to ponder what might have happened in Game 7 of the 1993 World Series. But sometimes it's fun to wonder if the Blue Jays still would've won their second straight championship - had it not been for Carter's heroics in Game 6.