Falling Asleep with a Pop Up Video On: Should ERA Estimators Include Popup Rates?

Share All sharing options for: Falling Asleep with a Pop Up Video On: Should ERA Estimators Include Popup Rates?

It's often considered that popups are so easy to field that they're essentially in-play strikeouts. This line of reasoning has long been held by both traditionalists and sabrmetricians. Furthermore, like strikeouts, popups cannot be productive outs because runners cannot advance.

However, neither FIP nor xFIP include popups as an input in predicting pitcher performance. Thus, these systems are making at least one of the following implicit assumptions: 1) that popups are no different from other batted balls (xFIP assuming that they are no different from other flyballs); 2) that popups occur randomly (xFIP assumes that, like homeruns, popups occur randomly within a given flyball-rate) and are thus beyond pitcher control; or 3) that other stats (such as strikeout-rate) can serve as proxies for popup-rate so popup-rates should not be included in ERA estimators because they add complexity but do not significantly improve performance of the models overall. Conversely, other ERA estimators, such as SIERA tERA, do include popups and, thus, must make all three opposing assumptions -- 1) that popups are different from other flyballs; 2) that popup-rate is (at least somewhat) constrained by pitcher performance; and 3) strikeout- and flyball-rate do not serve as adequate proxies for popup-rate.

The first assumption, that popups are no different from other batted ball types does not hold water because, as previously stated, not only are popups unproductive outs, but (and more importantly), popups are much less likely to become hits than any other type of batted ball. But what about the other two? Are these assumptions valid? How much importance should we place on popup-induction when considering a pitcher's repertoire? I decided to test the second assumption, that popups occur randomly.

Well, a wealth of studies have shown that flyballs in general do not occur randomly. This should come as no surprise, there are groundball pitchers and flyball pitchers. The question at hand, of course, is whether there are such things as "popup" pitchers. For the rest of this post, by the way, when I discuss a pitcher's "popup-rate", I am referring to the number of popups per flyball, not popups per batted ball, an important distinction. 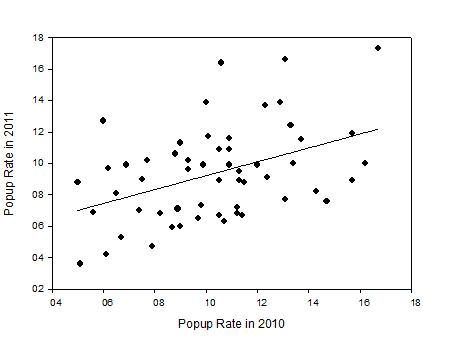 So we do see that, even with a fairly small sample, there is almost certainly some effect of pitcher on his popup-induction rate. However, this effect is fairly weak -- it accounted for only about 20% of the observed variance. Furthermore, it's possible that there is actually a relationship between flyball per batted-ball rate and popup per flyball rate. If so, this relationship may be -- at least in part -- what's actually responsible for the variance that was just ascribed to the pitcher.

So I next looked to find whether there was a correlation between flyballs and popups. Using SigmaPlot, I performed a linear regression of flyballs (independent variable) and popup-rate (dependent variable) for all pitchers with 170+ innings in 2011. The relationship was not only statistically significant (p < 0.0001) but was quite strong as well (Rsquared = 0.31), as shown below: 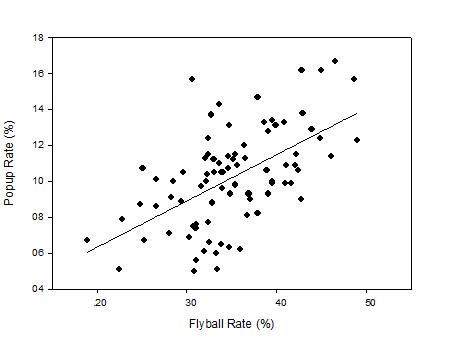 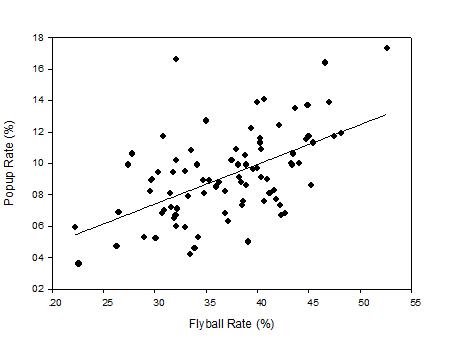 I decided to determine the significance of the pitcher effect by performing a linear regression on the differences between a pitcher's expected and actual popup rates in 2010 and 2011 to look for autocorrelation, which would be indicative of pitcher effects independent of flyball rates. Essentially, I was seeking to determine whether a pitcher whose 2010 popup rate was better or worse than would be predicted based on his 2010 flyball rate would still be better or worse than predicted in 2011. I found that, in general, a pitcher outperforming his predicted popup rate in 2010 did not have a significant effect on him outperforming his predicted popup rate in 2011 (Rsq = 0.00, p = 0.44, 55 pitchers in sample). In other words, pitcher popup rates seem to be more constrained by overall GB/FB splits than by any specific popup-inducing tendencies. 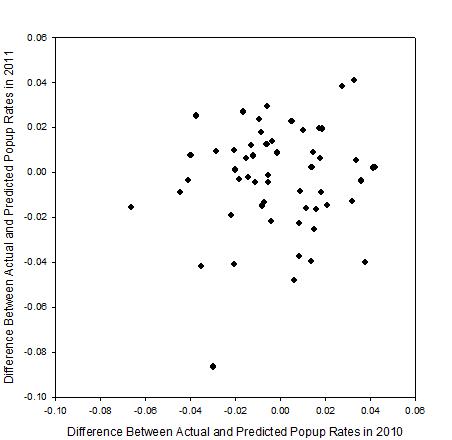 Now, this is a very short term (two season) study with only fifty-five datapoints. Still, it seems to me like ERA estimators can get by just fine without bothering to include popup rates but rather assuming popup rates are likely to be constrained by other splits. Looking at pitchers individually, it is likely that some pitchers are actually better at inducing popups. However, since popup rates seem to fluctuate fairly wildly, it seems that including popup rates in ERA estimators at this point would be overfitting models to what are actually fairly unreliable data, at least in samples as small as one or two seasons.