If The Jays Can Win It There, They’ll Win It Anywhere. Jays 8, Yanks 7

Share All sharing options for: If The Jays Can Win It There, They’ll Win It Anywhere. Jays 8, Yanks 7

What can I say? It was a win and an exciting game to boot. Broke that horrible 7 game losing streak as well as their offensive offense streak where they haven't scored more than 4 measly runs in a single game.

It didn't start out that way as Robinson Cano homered in the first off Henderson Alvarez. It was a mammoth home run to Right Centre that would have gone out in any ballpark. Adam Lind led off the 2nd with a homer off Yankees Starter David Phelps which was a deep drive to Right Centre. Things would remain scoreless till the Yankee's 4th. Robinson hit another solo home run... a Yankee stadium special. A walk, a fly out and a single by Chavez. Russell Martin did the most damage when he lined a shot off of Henderson Alvarez's left shin for a single, knocking him out of the game and scoring a run. Ichiro grounded out that scored the Yanks' 4th run. Mark Texeria left the game with a calf strain suffered in the inning, possibly out for a week but probably more. At this point, it kind of felt over because of the Jays inability to score more than 4 runs in a game.

However, that was not tonight. In the top of the 5th, KJ took a lead off walk and then was driven home by Yorvit Torrealba's 1st Home Run as a Jay. A shot to Right Centre that barely cleared the wall (a Yankee stadium special for the good guys.) The Yanks got that one back in their half when Aaron Laffey walked Derek Jeter and Nick Swisher homered just off the wall and out of the reach of Rajai Davis for a 6-3 Yanks score.

The Jays scored one run in the 7th when Yorvit singled with one out and was driven home from 2nd by single by Adeiny Hechavarria with two out off of Cody Eppley. Aaron Laffey left the game with a contusion on his left calf. Come on Yankees, stop hitting our pitchers!

At this point, Joe Girardi stuck with his infamous Binder by going with David Robertson who gave up two singles with two out in the 8th but struck out KJ on a fastball up and away to end the threat and Rafael Soriano, the closer, in the 9th.

The 9th didn't start out so hot as Yorvit struck out. Moises Sierra hit a grounder up the middle for a single. Hech flied out and up comes Rajai Davis who went o-fer earlier. He grounded a single to left on an 0-2 pitch past Derek Jeter the GG SS. It was down to the Cornrow-less Colby Rasmus who had actually got a single and made some good swings on his outs. Soriano missed with his first pitch and then threw a slider on the outside part of the plate, but he hung it right into Colby's wheelhouse... BOOM!!! Colby smashed a 3 run home run into the right field upper deck (first RBIs and HR in a long time) and give the Jays the lead 7-6. This was the first time since the White Sox Series the Jays offense scored more than 5 runs in a game let alone a series.

Casey Janssen came on for a rare save. It didn't go well to the lead off batter Derek Jeter who popped up a Yankee Stadium special home run to right field to tie the game at 7. Casey got the rest of the outs though.

The 10th inning was uneventful for both teams while the 11th was not. Yorvit hit a single off loser Derek Lowe to start off the inning and was replaced by pinch runner Mike McCoy. At this point Derek Lowe made a horrible throw to 1st which went down the line allowing Mike to reach 3rd base. I was not really happy about the fact that the Jays made Moises Sierra bunt with McCoy on 1B. At this point let the guy swing. Enough editorializing here. Moises struck out. Adeiny Hechavarria hit a slooooow roller to 3B where Jayson Nix threw to 1B to get the out. With the Yanks IF focused on Adeiny, Mike McCoy took off for home and surprised the Yanks to score the winning run. Darren Oliver would pitch a tense 11th for the win. He walked Ichiro, but got Derek Jeter on a force out and struck out Nick Swisher on a 3-2 curve to end a horrible 7 game losing streak.

It was a good exciting game but even better when the Jays win. 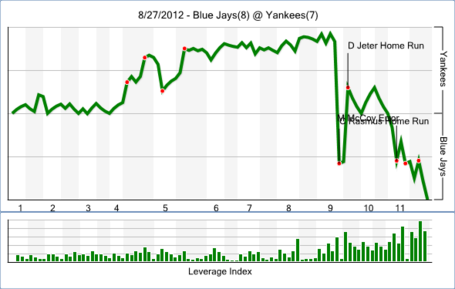 Based on Fangraphs WPA:

Most fun game thread in a long time. Tomorrow, it is Ricky Romero vs. Phil Hughes at 7:05pm