Share All sharing options for: Going For The Split - Blue Jays At Athletics - August 5 2012 GameThread

Remember when we were complaining about how the Blue Jays were always stuck around the .500 mark? Well, perspectives sorta change when the team is three games below at 52-55. The team climbed up from the nadir of the season so far after a thrilling extra-inning win against the Oakland Athletics yesterday, and they are looking for a win to get a series split in Oakland after being swept out of Seattle in the midst of a 6-game losing streak (see gigantic downward diagonal line below). 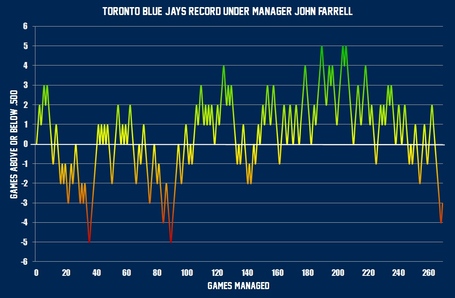 The Blue Jays' offence looked atrocious during that streak. During yesterday's game, the Jays were down 1-0 for most of the game, but the listless lineup made it feel like they were down 7-0. We can't really blame anyone--injuries have left the lineup with a bunch of players who played most of the year in AAA Las Vegas. But lo and behold, A's manager Bob Melvin called on the services of Ryan Cook in the 9th, who then promptly gave up a 7-run homer to David Cooper to extend the game into extras, a day after Jeff Mathis took him yard to tie up the game in the 9th. Thank you, Messrs. Melvin and Cook for lifting Jays' fans' spirits the past couple of days.

We are going to be seeing much of the same lineup today, with Colby Rasmus and Brett Lawrie both sitting out again to nurse their injuries. With an offday tomorrow and a night game on Tuesday, perhaps it is for the best. If we sum up all the Major League games played by our #2-8 batters in the lineup today, they would collectively have played just 83 more games than Omar Vizquel. Add up the games played by the 4 rookies in the lineup (#2,7,8,9) and they would have played one fewer game than Darin Mastroianni.

Today will be a lefty-lefty matchup on the hill, with the A's Tommy Milone facing off against the Jays' Aaron Laffey. Milone had a rough outing against the Rays last Tuesday, giving up 5 runs on 7 hits in 6 innings of work while walking 1 and striking out 4. That made it two consecutive starts of giving up 5 earned runs (he recorded the only loss for the A's when they were in Toronto).

On our side, Aaron Laffey had his worst start of the season last rotation, going just 4-2/3 against the Mariners after giving up 7 runs on 9 hits, walking 2 and striking out none. He struggled against these A's in Toronto, but he kept the Jays in the game, allowing 4 runs on 5 hits (including homers to Reddick and Inge).

UPDATE: For everyone who complained about the Jays recalling Jesse Chavez, complain no more as he was designated for assignment. The Jays' 2009 first round pick (20th overall) Chad Jenkins has been recalled and will be pitching from the bullpen.

Rules are simple: 1) no posting of images/gifs during the game (links are OK); 2) don't be a horrible person; you can complain about players but don't say they suck; 3) don't ask for or post links to illegal streams of this game. Thanks a lot and...