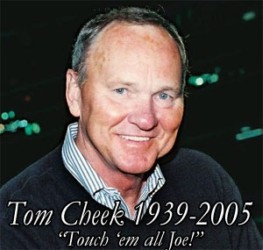 They are on to the 2nd round of fan voting for the Ford C. Frick Award. The top 41 from the first vote are on the ballot for the second vote and Tom Cheek is one of the 41. The top 3 vote getters this round will go on to the final ballot (plus 7 others picked by a Hall of Fame committee) and the award winner will be choosen from that group.

I'll admit I'm a little tried of the voting, each year Tom Cheek wins the fan balloting and, each year, the Hall picks someone else, but still lets make our statement that Tom Cheek is the most deserving choice. You can find the ballot here. Yes, you have to have a Facebook membership (but you could put up a temporary one and close it when the voting is other) and yes, they make the voting way more complicated than it need be.

Yeah, your eyes aren't tricking you, that's Mike Wilner's name on the list. I love Mike and all, but his name doesn't belong on this list. I'm sure he agrees. Alan Ashby's name is also up there. I don't understand how Wilner and Ashby can make it to the second round and Jerry Howarth doesn't, but it doesn't matter.

Anyway, go vote for Cheek. He deserves the honor.