Thank You For Making 2012 Bluebird Banter's Best Year Ever!

Share All sharing options for: Thank You For Making 2012 Bluebird Banter's Best Year Ever!

Once again, Bluebird Banter heads into the new calendar year having set a record for visits in the previous year! Thank you very much for continuing to visit our community for Blue Jays news and opinions. We will certainly have more of that coming this year! We hope that many of you who just read would click the join button and join our discussion in the comments. Don't worry--we don't (usually) bite.

Also, if you use Facebook, go "Like" the Bluebird Banter group. TonyFernandezSavedMyLife does a fantastic job keeping that up and has been trying to push members past 1,000, And of course you can visit us in person by coming to our screening of Knuckleball! tomorrow in Toronto. We had two official Bluebird Banter meetups last year--one in Toronto and one in Calgary, and they were both superfun.

Woodman wrote one of these posts a year ago, and I surely hope that one of us will be posting another one of these in 2014. In 2012, Bluebird Banter had a record 2,847,080 visits, a 33% increase from 2011. Since the blog started seven years ago, we have had tremendous growth as can be seen in the graph below. 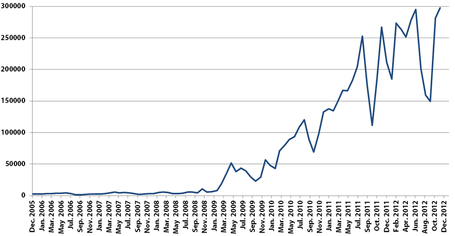 Tom always tells us that when he first started, his goal was to get the blog to 5,000 visits a month. As you can see, we have greatly surpassed that now--we now get to that number on a slow day. Bluebird Banter just recorded its best month ever this past December, having had 297,330 visitors come by. Looking at our division mates--Camden Chat, DRaysBay, Over The Monster, and Pinstripe Bible--we have seen tremendous growth from 2009 to 2012. Just like 2011, we led the A.L. East SB Nation communities in the number of visitors in our respective peak months. The best news of all is that all five sites improved on their peak month compared to 2011. 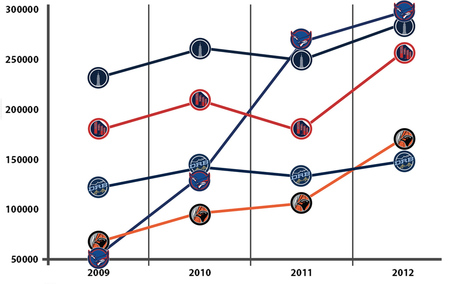 We have been close to 300,000 a couple of times (295,143 in July and 297,330 in December) so that remains a goal of ours in 2013. Perhaps we can hit that this March or April as baseball games start to be played. Of course, we'll need a bit of help from the Blue Jays to get more eyes on our stories. As you can see, our numbers plunged by almost 100,000 after July when the club started to unfurl. But folks came right back during the John Farrell affair, when the Blue Jays and the Marlins completed the Mathis Trade (concurrently the signing of Melky Cabrera and hiring of John Gibbons), and when R.A. Dickey was acquired.

We continually strive to improve the quality--and quantity--of our posts in order to make this the best site for Blue Jays news, opinions, and discussion. Thank you once again for reading and contributing to our little corner of the internet and as always... GO JAYS GO!